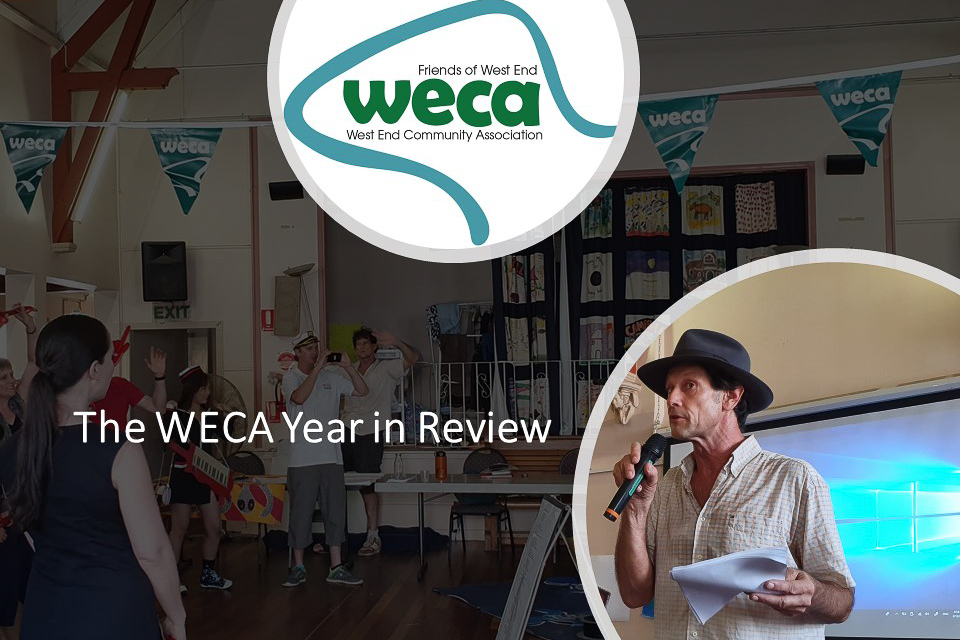 On Saturday the 15th of December, West End Community Association (WECA) wrapped up the year with a celebratory annual general meeting.

Rather than the usual dry AGM consisting of reports and elections, the ‘Let’s Talk’ themed event was given over to reflection on the past, on recent achievements, and on considering challenges for our future.

Guest speaker, Mary Maher, the first President of WECA, outlined a history of engagement around development and neighbourhood planning that started with the West End Push in opposition to Expo 88. Jan Bowman of The Westender, reflected on the popular stories for 2019 that remind us that Westenders love to read about our community and to celebrate its people. Landscape Architect, John Mongard challenged us all to work together as we face the reality of climate disruption in Kurilpa. He and co-organisers are talking with local community groups in Kurilpa about a proposed 2020 workshop to get us all involved. Finally, Seleneah More, planning spokesperson for WECA, stressed the need for the community to engage with the many new residents to West End.

As a novel innovation, WECA extended the opportunity for community groups and local elected representatives to display their wares and talk with participants. Groups included the South Brisbane Men’s Shed, the Uniting Church, TRACE, Queensland Police, Dauphin Terrace Bush Care Group and others.

WECA acknowledged the service of it 2019 Management Committee members who did not renominated: Lucy Cameron, Domenico Napoli, Adrian Buzolic (President) and Hannah Whittle.

In his address, out-going President, Adrian Buzolic attributed the successes of WECA over 2019 to the dedication of its committee, and to community collaboration and participation. Read his full report below.

The way I see it, a good community or any community at all, is where the people involved know and care for each other. I agreed to be WECA president in 2019 because I believe in the importance of community and in WECA as being an effective means of both promoting and developing community.

I’ve been actively involved in WECA for over 12 years and during that time I’ve come to see what we do through WECA in terms of two things; representing and facilitating. We provide a voice for our community and we make it possible for groups in our community to do things.

To my mind it is more important to help mobilise and make it easy for fellow community members than to do something “for” them. The complicating factor though is that members of WECA and members of the WECA committee are also members of the community so we are often facilitating projects that we ourselves, as individuals, have come up with are also involved in implementing.

Boomerang Bags: This year we were able to assist the group Plastic Free West End with their Boomerang Bags project by auspicing a grant they had won and by contributing expertise in grant management to the project – thanks to Sharon Nicoll our treasurer.

West End Film Festival: We were able to provide similar support some years ago to Mike Witt and Scott Pardey when they were putting together the first West End Film Festival (WEFF). Since that time the WECA Management Committee has taken full responsibility for the festival and recruited directors to conduct it. Thanks this year goes to Anthony Toci and Adam Finney for being our WEFF directors in 2019.

From my perspective the festival built on the successes of previous years by finding ways to be even more based in, accessible to and owned by our local community. Thanks are also due to Erin Evans and Tristan Swanwick for providing guidance to the festival on behalf of the WECA committee and to all those who helped make the festival a reality and who are too numerous to mention.

Kurilpa Derby and Beggars Banquet: This year our Kurilpa Derby and Beggars Banquet also maintained its reputation as our community’s “favourite day” and managed to attract even more participation from community members especially in relation to the banquet. It’s distinctive nature as a non-commercial, inclusive and participative event continues to celebrate all that is good about our community and continues to attract the attention of other communities in Brisbane and to provide them with inspiration. This year special thanks go to Seleneah More who provided both overall responsibility for the implementation of the event and supervision on behalf of the WECA management committee and to Kristen Hopkins for taking responsibility for the Beggars Banquet. Again, although the list of other volunteers who made the event possible is too long to include here yet their contributions are appreciated and acknowledged as crucial to the event’s success.

Community Development of People’s Park: Along with other community organisations WECA publicised and members contributed muscle power to a community effort to revitalise People’s Park on Boundary Street. WECA also made use of its incorporated status and the grant writing skills of its management committee in successfully applying for a $10,000 grant to further develop the area. Special thanks go to Secretary Kara Burns and MC member Lucy Cameron for their efforts in this regard. For the Future: In further enhancing our ability to support initiatives in our community it may well be useful if WECA could develop skills in crowd funding. In this way members of our community could contribute to the community’s own projects as they saw fit.

Liaising With Elected Representatives: This year the management committee instigated a discussion of the advisability of remaining neutral to party politics and how to maintain such neutrality while still actively advocating on behalf of the community’s interests. Lines of communication were maintained with our elected representatives at both State and local government levels through face to face meetings and regular electronic contact. Thanks to Erin Evans and volunteer assistants WECA also conducted a “Meet The Candidates” forum ahead of this year’s federal election facilitating face to face access to those who would seek to represent us. The forum was well attended and attracted national media attention.

Participation in Consultation Processes: There have been a number of opportunities for community members and their representative organisations to participate in consultation processes during 2019. WECA’s experience in dealing with such processes over the years has lead to an understanding of the merits of such processes. Discussions on behalf of the community were held with Souths Logan Leagues Club in relation to their proposed enhancement of Davies Park. Discussions were also held with Developers of a property adjacent to Davies Park but the decision was made not to participate in a further process to develop the proposed design of the site because the proposal included raising building heights above the already unacceptable limits contained in city plans and that aspect of the proposed development was not open for discussion.

Contributions were also made in relation to a proposal to redesign the Boundary Street commercial district according to CPTED (Crime Prevention Through Environmental Design) principles. WECA argued strongly that the area be seen as a community hub that includes commercial activity rather than the reverse but that both objectives could be achieved while building on the compassionate, a distinctive quality of our community. WECA also proposed an expanded re-design process that was inclusive of all interest groups. WECA subsequently contributed to a planning exercise conducted by the Kurilpa Futures group with the aid of University based place-making students.

Similarly, the merits of consultation processes put in place for Montague Road and Dornoch Terrace have been assessed and contributed to where such efforts were deemed worthwhile.

Legal Action on Behalf of the Community: The views of the community did not require WECA to mount any court actions in relation to development or building approvals during 2019. Happy days.

Enhancing Communication Between Members: This year a closed social media group was established to facilitate discussion between members free from the disruptive influences of non-members who, in many instances, have vested interests that are not those of our community. This group is currently being bedded in.

For the Future: WECA could enhance its ability to represent the views of the Kurilpa community by developing if ability to survey community members and to conduct qualitative inquiries through means such as focussed group discussions.

A SPECIAL THANK YOU

In this report I have mentioned, acknowledged and thanked key people who have been responsible for various initiatives; who have shown leadership; and who have contributed greatly of their time and resources. In addition to those I have already mentioned I would like to add all the other members of the management committee of 2019. You make WECA possible. And to those who have nominated to volunteer for the committee of 2020 I thank you for making WECA possible into the future. But building and nurturing a community also means making it possible for others to know and come to care for each other. So, to those I have been able to identify by name I would like to add thanks to all those who supported their efforts as volunteer organisers on committees, sub-committees and working groups who contributed their time, patience and resources. And to all members of our community who have shown a willingness to know and care for their neighbours in 2019.