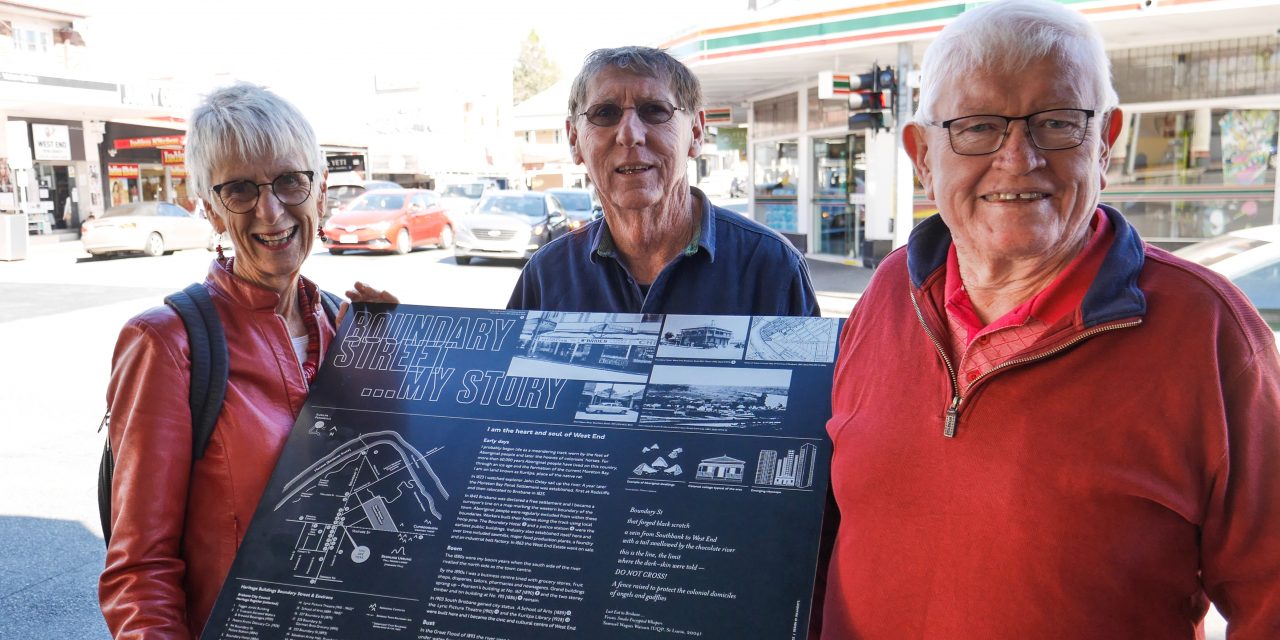 This morning the first of the West End Making History Group‘s history panels was installed outside Terry White’s Chemist on Boundary Street while members of the group stood proudly by. Keep an eye out as more panels are installed over the next two days by local signwriter Shane Kunst and his team, ready for the official launch on Saturday the 24th of August.

“This is exciting, after two and a half years of writing, debating and looking at every word on the plaques, it is now becoming a reality.”

Over more than two years, a group of intrepid locals, the West End Making History Group, has developed a set of six large scale information panels exploring West End history. These 710 mm x 710 mm aluminum panels will be installed at points along Boundary Street between Vulture and Russell Streets. The panels are set at a height suitable for children and people in wheelchairs.

Tim Quinn said the installation of the panels is a very significant event for West End as a community.

“Up until now we have not had historical markers in West End, and yet West End is one of the Brisbane suburbs that is most rich in history and interesting stories. It is important for us all to understand the full history of our past in order to have any understanding of where we are now, and how we might develop in the future,” Mr Quinn said.

The project, which began with the simple idea of documenting the history of Boundary Street quickly became a story which could not be told without reference to the broader history of the area. One panel became two, then four and finally six. With input from a wide range of local community members, the group has presented an account of West End which will both inform and provoke.

The most challenging aspect of the project, Steve Capelin said was selecting from 200 years of history, just 350 words to try to encapsulate each story.

“People will probably be debating for years to come, what was left out and what was included.”

The six themes are:

The panel content has been developed by members of the West End Making History Group and designed by Inkahoots Design. They expand on the four booklets which the group has previously published as walking guides to the suburb.

The project has received support from the Gabba Ward Office through the Lord Mayor’s Suburban Initiative Fund.

The panels will have their official launch on Saturday 24th of August at the Goanna, corner of Boundary and Russell Streets at 3pm.

Residents, traders, members of the Indigenous community, and the Greek and Lebanese communities gathered at the lizard on Boundary Street on Saturday the 24th of August for the launch of the West End Making History Group‘s history panels. The gathering later migrated to Avid Reader Bookshop for refreshments.

For photo gallery of the launch day see HERE