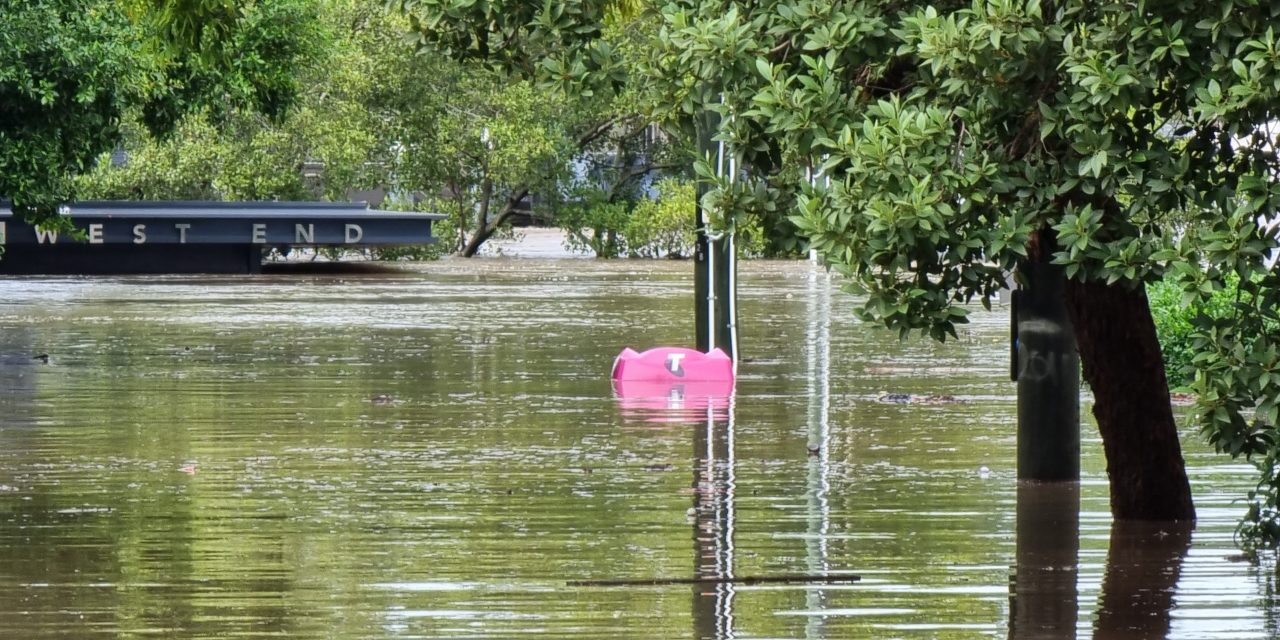 The suburbs of West End, South Brisbane and Highgate Hill, particularly the apartment blocks west of Montague Road and the tin and timber housing streets by the river, felt the effects of the flood disaster in February this year.

A network of organisations and individuals in the Kurilpa Peninsula started meeting soon after the flood. Calling themselves ‘Resilience Kurilpa’ they started out with a desire to help out by finding practical projects to strengthen our community’s capacity. Resilience-building will be a continuous need into the future, as we work out what practical things can be done to strengthen our preparedness and our responses to climate change impacts.

Mary Maher, a resident who has seen a few floods said that “Last flood, in 2011, there were 2132 houses impacted directly across 21 streets on the Kurilpa Peninsula. This time the impact on high-rise developments from floodwaters and power cuts has been higher.”

“Residents have been telling us about the significant emotional distress and fatigue, and this has been particularly concerning for vulnerable and isolated elderly and people with disabilities in West End” observed Pam Bourke, a founding member of Kurilpa Futures.”

“It was clear from the amount of household goods and personal belongings piled on the footpath for removal that the impact of the flood on affected properties was little changed since 2011. What did we learn last time, what was tried and what new ideas are emerging for property owners, unit owners or body corporate members?”

Resilience Kurilpa used the results of conversations held by its member organisations (Kurilpa Futures, WECA, West End Community House (of Community Plus), West End Traders, Net-Zero Kurilpa) with affected residents, businesses, and community groups to make submissions to the inquiries into the floods which Brisbane City Council and the State Government have initiated.

A three-pronged approach to building flood resilience has evolved from these conversations:

These three focus areas form the basis of Resilience Kurilpa’s work with the impacted communities of Kurilpa’s streets and to their approaches to all levels of government. Government needs local information in relation to future work on warning systems, evacuation routes, home restoration assessments and funding, as well as improving flood management for apartment buildings.

It was no surprise to learn that the residents of flood-impacted apartments spoke of common experiences. Pam Bourke described some of these,

“People were stranded in their apartments for days. And we are still counting the damage, building by building. These included sewer manholes blowing and filling basement car parks with raw sewage; inundation of vehicles; sudden loss of power; lack of meaningful information on predicted flood levels, unexpected delays in repairing lifts and restoring power.”

It is distressing to realise that few apartment buildings had taken steps to reduce flood impacts in the decade between the last two floods. Raising the electricity transformers from the basement to higher levels appears straightforward but the lack of alternative location meant that this step for flood resilience remained just a proposal that was not put into practice.

Resilience Kurilpa will continue the discussions in preparation for a community forum of flood-affected house and unit residents to determine what steps people support to increase their knowledge and plan coordinated actions for the next flood. Currently, the preparation of a prototype of a Flood Management Plan for each building in an apartment complex has support. It would be similar to a Fire Management Plan with roles and responsibilities defined prior to the event and residents knowing what is their responsibility. This simple measure would reduce some of the preventable impacts of a flood.

‘Having a network of body corporate members sharing ideas about preventive measures they have undertaken also has considerable support from the people with whom we have spoken. The building of a strong, community of residents in apartments who are determined to be ready and more protected for the next flood is one of Resilience Kurilpa’s key goals”.

Resilience Kurilpa is still building its online presence and plans to hold events to engage with the local community. The Westender will provide updates.

Resilience Kurilpa welcomes your feedback, so please use the comments block below.

WESTENDER STORIES ON THE 2022 FLOODS ARE AT THIS LINK