Lunar Syrup at O’Skulligan’s: a night of neon rock 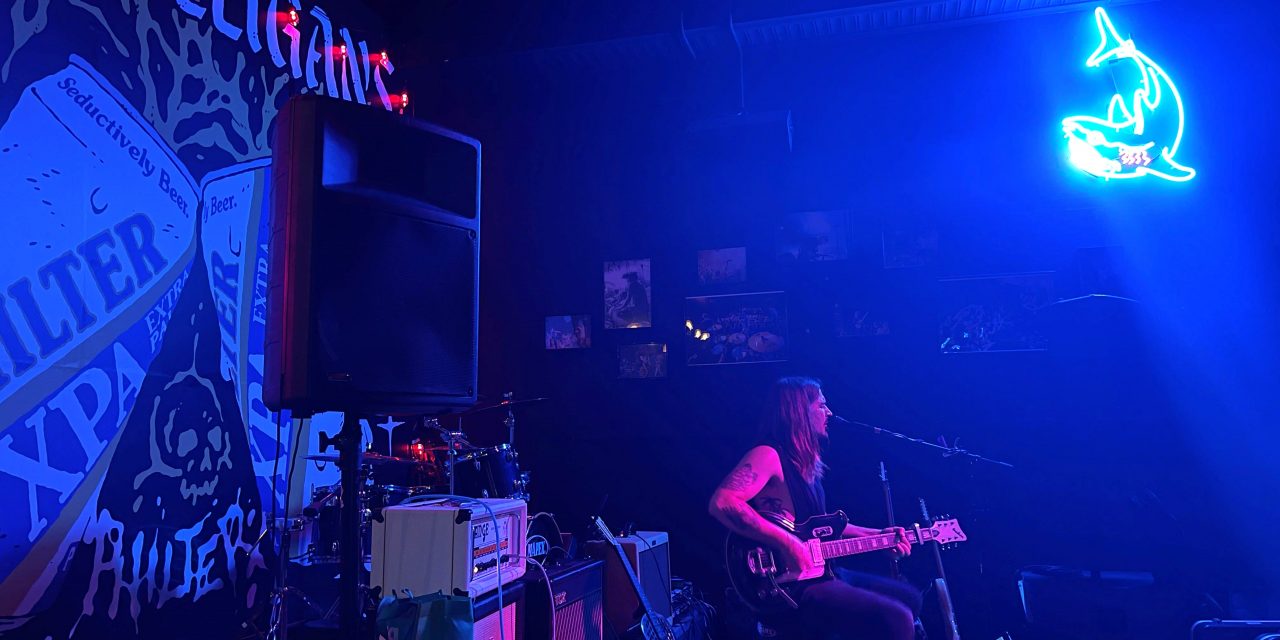 On 10 December, Gold Coast band Lunar Syrup took to the neon-lit Fortitude Valley bar O’Skulligans to launch their new single “Architect of Dreams,” supported by Brisbane one man band L.R. Marsh and Tom Dron. Each bringing something new and different to the show, the acts put together a night of adrenaline inducing, well-rehearsed music showcasing a variety of Brisbane’s best.

First up, multi-instrumentalist L.R. Marsh put three-pieces across the globe to shame, busting out blues-rock bangers solo featuring his voice, guitar, and an instrument case playing the roll of kick-drum. Launching into tunes evoking such bands as the White Stripes (even playing an Airline guitar at one point) and the Black Keys, Marsh became an absolute whirlwind of charisma, playing the guitar with the languid ease only seen in musicians born to it.

Listening to Marsh is like finding oneself sat within a cyclone, feeling your pulse climbing and inching closer and closer to the edge of your seat. It’s hard to describe how difficult it is to master three instruments at once, but it felt as though Marsh became more relaxed and natural the more complexity he took on.

A seemingly bottomless quiver of crackling blues riffs doesn’t leave anything on the table, and there are few guitarists in Brisbane able to tear through so many iconic licks without homogenising their sound. With the tight, almost mathematical acts soon to follow, it was brilliant to see someone sliding through what felt like a natural, easy set of rollicking blues tunes.

There’s something endlessly impressive and satisfying about truly intelligent music, and second support Tom Dron makes music like Euclid might have. The local Brisbane boy and his band were staggeringly well rehearsed, weaving their way through time signatures that would make Japanese math rockers blush. Cool and confident rhythms and fills gave way to the unreal guitar solos that define the band’s sound.

While the quicker numbers had notes of Car Seat Headrest, I would be shocked if Pink Floyd hadn’t left an indelible mark on the musical upbringings of the band members (although it’s hard to picture David Gilmour saying “This one goes out to Scomo – f*** you”). Easy timing, ethereal tones, and an enviable combination of natural comfort and trained discipline produces music which is hard to fault.

For most musicians, the ability to play in time is simply the beginning of building a live sound. For Tom Dron, however, it has somehow become the foremost and most necessary of the band’s skills, required to pull off the tricky rhythms and intricate instrumentation. It might not sound flashy, but without such a sense of timing, moments like the absolutely gut-busting drum solo toward the end of the set would not be possible. These guys play engaging, thoughtful music, and I can’t wait to hear their sound fill a big venue. There’s no doubt they’ll get there.

With tough acts to follow, Lunar Syrup took the stage to frankly rapturous applause from a crew of fans who brought a crackling energy to the small venue. Led by front-man Jake Fox, the band launched into their set with an intimate passion and a thick, echoing sound usually reserved for big bands in big halls. Lush, dense tones and harmonics made possible by imaginative effects and the skill of the musicians fell together to create tunes ranging from slow, quiet numbers to thundering rock jams, all tied together by Fox’s mercurial voice.

While employing an admirable delicacy on the more heartfelt tracks, Fox’s true calling is letting loose on the higher, louder notes, giving the audience the taste of a sound you can really cheer for. Fox’s guiding light pairs wonderfully with the barely restrained, absolutely wild guitar work of Chris Yalden, who weaves together a taste for quick staccato rhythms with cerebral chords and what I would call “utterly outrageous” solos, absolute chaos given form. In the same manner Fox’s voice is best when completely letting loose, Yalden is at his best when wrestling howling auditory artworks from his Telecaster.

Lunar Syrup know how to play to the crowd. Dropping new single “Architect of Dreams,” it wasn’t difficult for the band to draw out that invaluable “Hey!” chant from the audience, providing a nice counterpoint to the beat of the new track and forging a bond with what seems to be a pretty hardcore group of fans.

This only became clearer with Yalden meandering among the audience, while playing yet another of his staggering guitar solos. Lunar Syrup obviously has something, and left me wondering if I wouldn’t have been better off tearing up the dancefloor with their group of loyal fans.

The three acts complemented each other nicely, and put on an evening of thought-provoking, honest performances. I’d recommend to anyone looking for a night of fun, cerebral music to track down L.R. Marsh, Tom Dron, or Lunar Syrup.