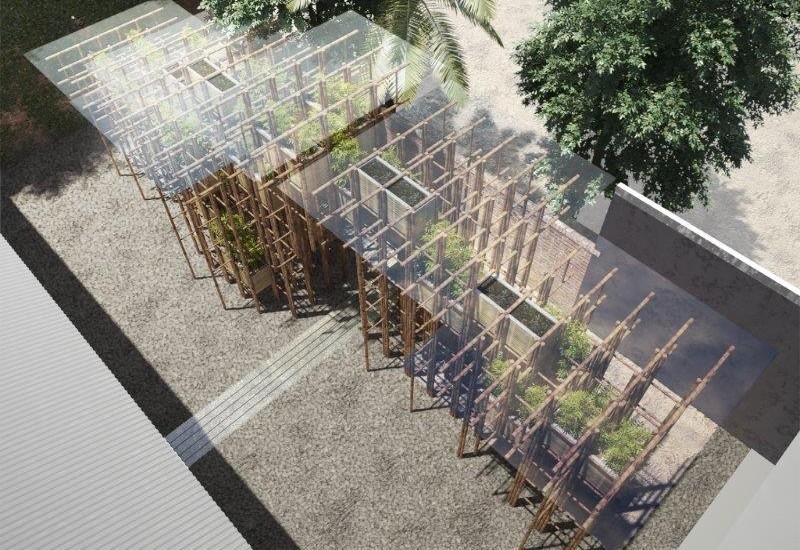 The first speaker for the 2016 lecture series hosted by UQ and the Queensland State Library was Moon Hoon. It turned out to be an inspiring evening and a great way to start the series. So, make sure you check out what’s on at the State Library.

On Moon Hoons business card, he refers to himself as an architect, a designer and underneath that, is the descriptor “Space Tuning ”.  A nice phrase which did turn out to suggest how we might understand his talents and interests. Moon Hoon is now a resident of Seoul and was educated in Korea, USA and Tasmania. He showed a breadth of influences and techniques in his engaging free ranging “discussion with doodles,” as he called it. He introduced himself through his, eccentric illustrations that have impressed architects around the world.

Many in the audience would have considered his drawings, sketches, and designs as a great starting point for some implausible narratives that on occasion would lead to a build, but more often lead to funny, witty anecdotes and more doodles. This was no ordinary lecture, but more a stream of consciousness teased out of the images on the screen by a talented performer and communicator.

But what about the translation of preparatory sketches into working drawings and then into buildings – some might ask.  However, most were happy to be tuned into the spaced out Hoon, and uplifted by his “windy dreams. ” which showed houses liberated from their foundations to fly free of the practicalities of gravity and good sense. Was this Space Tuning?

Towards the end of the talk we did see more examples of his architectural work, some of which would not have seen the light of day in Brisbane, but how entrancing to be swept along by his anecdotes and jokes about things that worked, and things that didn’t.  It would be churlish to criticize his buildings by the established values of design practicalities, rather better to smile with him as he dared to cross boundaries and building codes, sometimes tripping himself up along the way.

In the broadest sense, and very importantly, these talks at the library have opened up pathways to the Asia Pacific Regions and nationalities, and this can only be a good thing. The session at the end was useful in that it sought to pull together his ideas about how he saw himself as a Korean architect. Yes, he wanted to retain certain traditions in his architectural practice, but with a little “Spice” added.  Moon Hoon certainly did produce a spicy, tasty and colourful smorgasbord of ideas to start the lecture series.

Every Tuesday, but check the availability of seats and further info http://aparchitectureforum.com/