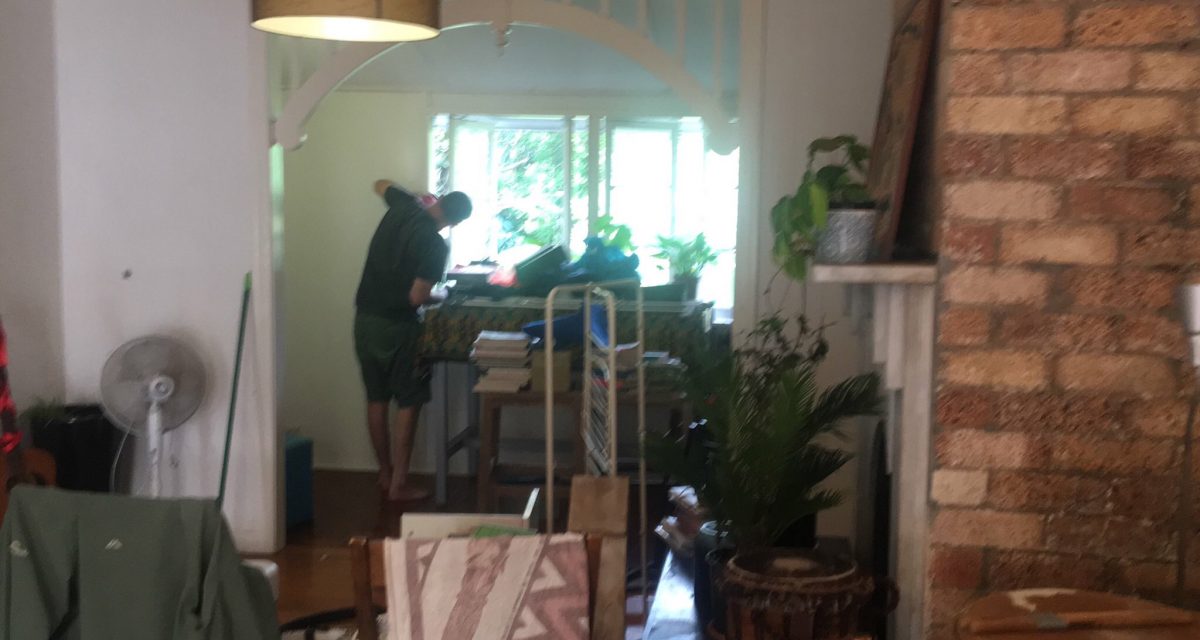 Mould, it seems, is our new housemate. For my two-story Queenslander sharehouse rental in Highgate Hill, it arrived early in the year on odd pieces of clothing: a baseball cap left in the corner, on the tips of a few shoes, that corner of the house we never look at, but all manageable.  Then came the odd smell from downstairs, and my housemates who occupy the rooms below swore it wasn’t their dirty socks or exercise towels. It settled in a few corners with the February floods but a spot of tea tree oil rendered it invisible.

Then early in May, after another thunderous downpour of wet weather, the mould ripened. It invited some friends and propagated themselves over the living room walls and had fungal times indiscriminately on brick and wood. The effects of their housewarming were seen by us waking on one fateful Sunday morning in May. A black-grey spotted lining over all our living room walks, they were visibly primed and ready to birth their spore children, claiming our home as theirs.

We inspected, marvelled, and gawked at the mouldy events of the night before, each trying to outwit the other in finding the oddest place mould had grown.  An impromptu meeting in the living room lead to bigger questions about how to clean and who’s responsible – the landlord or the tenant?

First Dog on the Moon described mould as a new pet in their comic on the rental crisis. Courier Mail and ABC released stories about this widespread infestation, with Mould Men chief executive Gerard Murtagh, telling them both of the 500% uptakes in inquiries. Useful tips and tricks filled newsfeeds about ways to treat mould, from clove oil, tea tree oil, and vinegar to mould killer, unsurprisingly, most of these products promptly sold out in shopping centres over the next weeks.

According to Asset Agents, a property management company on the Sunshine Coast (where mould is no new phenomenon), as soon as the mould dries, it releases its spores. The surest recipe for the removal of mould is to dry the place out by creating a well-ventilated space, then add a bucket full of sunshine and not a drop of moisture. Bunnings does not sell these things. The weather wasn’t providing sunshine for at least another week.

Our mixture ended up being a capful or a few drops of clove oil, tea tree oil and vinegar diluted with warm water in a spray bottle. We tried various methods of wiping, wiping, drying, spraying, leaving and wiping later thar day. This continued on for the next week – hours of wiping, moving furniture and clothes around, a trip to the dump, and finally – a very clean house.

According to the Rental Tenancies Authority, depending on the source of the mould, the responsibility can fall to either the tenant or the landlord.  Tenants Queensland CEO Penny Carr, in an interview with the ABC, advised, “Whatever you think is causing it, if you’re a tenant, put it in writing, let the other person know as quickly as possible, […] If you don’t know the solution, just ask them to come and have a look and fix it.”

We promptly sent an email to our property manager with photos requesting an inspection into the origins of the mould. She advised us a few days later to clean “the mould then purchase a Damprid from Coles or Woolworths which takes the moisture out of the air and helps with the mould.” She refused our request for any further inspection about the origins of the mould, dismissing it as “in every house in Brisbane” and telling us we could cover the expense for a mould inspection. A week or so later, she asks for photographic evidence ensuring the mould had been cleaned.

Mould is commonly harmless to humans and animals, however, exposure in some cases can result in headaches, sinus and nasal congestion and skin and eye irritation. The weekly migraines that I blamed on my monthly visitor, the phantom COVID throat symptoms with negative RAT tests, and the smelly socks I accused my housemates of all seem a bit mouldy now.

Mould also needs to be cleaned with care. Thankfully we didn’t throw in any bleach to our mould-killing concoction, because that makes chlorine gas, which can cause damage skin, eyes, throat and lung with third-degree burns. Also thankfully, we’re in a pandemic, so most likely we’ve got a good stash of gloves, eye protection, and face masks on the ready.

At the end of this sunny June, we lit up our backyard fire pit for the first time this winter and watched one of our favourite mould-infested chopping boards burn. With the last week of weather, I wonder mow if that is the last chopping board we’ll be burning this year and how cosily our new housemate, mould has settled in.