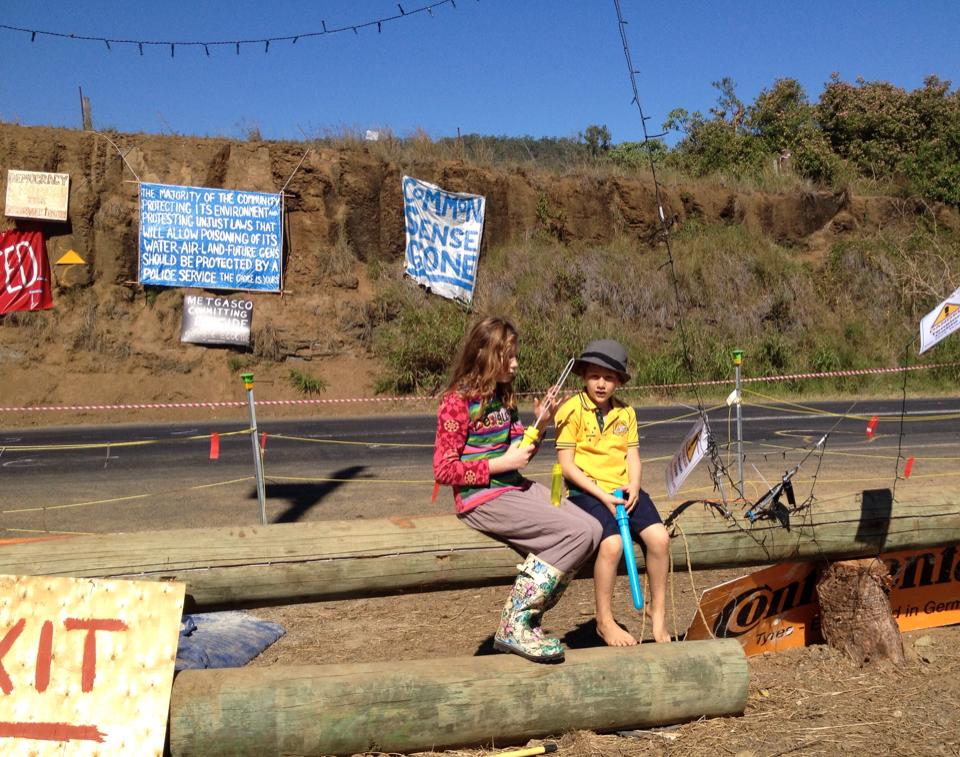 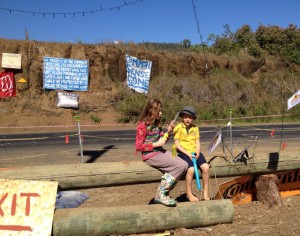 Queenslanders alarmed by the VLAD laws and sabre rattling over G20 need to keep a sympathetic eye on their southern cousins over the next week. Westender joined activists at Bentley over the Easter weekend to see how the 3,000 local citizens are preparing themselves for a major act of civil disobedience. They are camped next to a farm and actively supporting a group of hard core activists (Simmos) chained to structures put in place to “lock the gates” of a farm that has invited gas miner Metgasco onto his property.

Since then, the temperature has risen as reported by Mick Daley at http://www.mickdaley.com/?p=155 and quoted below.

In what appears to be a classical military pincer manoeuvre, the NSW riot squad seems poised to enforce Richmond Valley County Council’s decision to shut down the anti-CSG Bentley protest camp.

This move comes hot on the heels of a visit to Casino last week by Energy and Resources minister Anthony Roberts. Refusing to meet delegations from the 3000-strong camp, Mr Roberts instead closeted himself with APPEA representatives, pro-gas Mayor Ernie Bennett and Council’s general manager John Walker, who has previously been under investigation by ASIC.

As the end of school holidays looms and the camp will presumably be vacated by the large number of families staying there, the announcement appears to be carefully synchronised by a state government that refuses to accept the Northern Rivers community’s right to refuse invasive gasfields.

Interestingly enough, it also coincides with warnings by an unnamed source to representatives of the camp, which they claim specified next week, from Monday April 28 on, as the likely dates for an onslaught by huge numbers of riot police, bolstered by the implementation of the Cronulla Riot Rule 6A, allowing extraordinary police powers.

“Such a response by government would be a clear misuse of those extraordinary powers against a peaceful but very sizable local opposition,” said Aidan Ricketts, a Gasfield Free Northern Rivers representative.

Aidan claims that an unspecified source within government has warned that up to 700 riot police will be deployed against the camp. The Minister’s office failed to respond to attempts to verify these claims.

The Richmond Valley Council’s timely announcement could act as a trigger for these police to be trucked in to the Northern Rivers as a pretext for shutting down the camp and allowing CSG mining company Metgasco to bring in a drilling rig from Queensland to commence work on its beleagured well site at Bentley.

Aidan Ricketts claims that the three month standoff at Bentley has gone beyond a policing issue, particularly in the light of the resignation of NSW Premier Barry O’Farrell and other related gas-industry investigations currently underway at ICAC.

“It is a political issue and as far as we’re concerned it’s a democracy issue, because 87% of people voted in a registered AEC poll that they didn’t want gasfields in the Northern Rivers,” he said.

“But the minister came and instead of seeking political solutions he was preparing the ground for a military solution.”

He said that these powers had previously been used on a non-violent activist training camp in 2010.

“Under those powers they can arrest anybody without cause, just for being there, which means they can target who they see as organisers. They can sieze mobile phones and communication devices, they can shut down areas and stop and search vehicles and search and stop mobile transmissions.

“So it’s a full suite of extreme police powers and any arrests or offences that they charge people for have a maximum $5000 fine.”

Minister Roberts has labelled the campers as “extremists”, despite the overwhelming presence there of everyday people from the Northern Rivers region. Aidan Ricketts says that this kind of inflammatory statement is designed to prime the police to ignore the peaceful demographic of law-abiding residents exercising their democratic right to oppose what they see as a toxic, invasive industry that will not benefit their region or Australia.

“They have an impression that there’s a hardcore that they want to get and they kind of don’t want the mainstream mums and dads and farmers in the way. Unfortunately at Bentley they’re going to get the mainstream, because the mainstream is what it is,” Mr Ricketts said.