Offence is not always the best defence 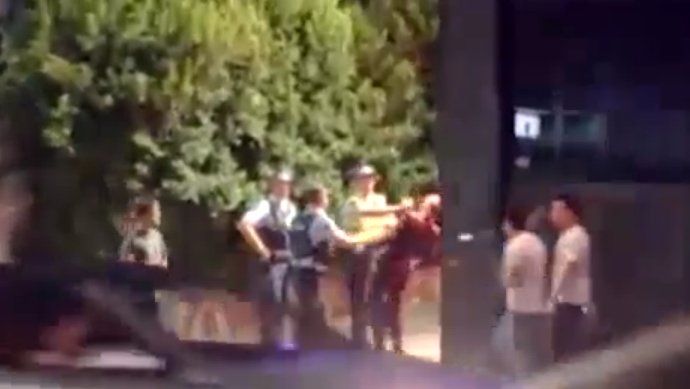 As kids we are brought up being told that we can trust the police. They are the good guys. Those that will save us if we are in trouble. Maybe not so strange then, when a police officer is caught on camera doing something questionable and it is possibly taken out of context, that the public goes absolutely ballistic.

In a video published on Saturday you can see a man being first allegedly punched by a police officer and then arrested by the three officers in Fortitude Valley Friday night last week.

The video created an instant public outcry on social media and in comment sections of news articles about the incident. The public wanted answers to what really happened and even demanded the police officers to be suspended. Some mentioned that this reminded them of how the police acted when Joh Bjelke-Petersen was Premier of Queensland.

The most interesting, and creative, demand was when a few claimed the police officers should be charged under the new VLAD bill due to its vagueness.

QPS Media Unit published a media release informing the public that the incident was being investigated, but it is here where they failed miserably and allowed concerned members of the public to act as judge, jury and executioners.

With certain investigations it is vital to withhold information. This is to ensure that if a case is taken to court the trial will be fair and not tainted by speculations in the media and social media.

With that said, keeping the lid on too tight, as happened here, encouraged rampant speculation on social media.

The next media release was not really any better than the first. It did state they had spoken to the arrestee, Beau Hall, who had allegedly been punched, and no formal complaint had been lodged.

Shortly afterwards a Brisbane Times article said the three officers had been “vindicated” by CCTV footage that showed the whole confrontation unedited. Unfortunately this footage has not yet been released.

In the Brisbane Times article it was alleged that the officer did not punch Beau Hall, but shoved him with an open hand. The reason for this was, “[He] clenched his fist, pumped his chest out, started to lick his lips and come towards police.”

If this is all it takes to receive such treatment from the police it is understandable why some in the public are concerned and wary around the police.

Joe Ritson who filmed the incident has told 9 News he was threatened with arrest if he continued filming.

Here we have an incident where the police allegedly punch a person, who does not look threatening on film and is outnumbered. To threaten the person filming this incident with arrest as alleged, only makes matters worse.

It would have helped public perceptions of the police if it had been known that the police were responding to a call that Beau Hall allegedly had urinated in the alleyway. It would also help if the public knew that what looked like a punch on the video was instead a shove to defuse a possibly dangerous situation. It is hard to see how letting the public know these two facts would negatively affect a possible trial or fuel the rumour mill on social media.

Instead the QPS Media Unit decided to be very frugal with information. Yet they pride themselves on being good at providing information when receiving requests.

Westender has tried to reach out to QPS Media Unit twice, asking if the CCTV footage will be released, . QPS Media Unit has informed me they do not own the footage and can therefore not release the it, and the incident is still under investigation.

Considering the outcry by the public, releasing the CCTV footage might actually have a true, vindicating effect if the public is allowed to see it with their own eyes.

As it is correct that the footage that is available on YouTube only shows partially what happened and the angel is often a bit awkward.

Many seem to focus on the alleged punch, which later has been stated to be an open-hand shove, but I do not think I am alone being concerned with what seems to be a person that is acting in a non-threatening manner being heavy-handedly arrested. This raises the question, what if a member of the public is mistaken for someone else and is arrested, receiving the same treatment as Beau Hall?

It also raises another concern, will this be common to the lead-up and during the G20 meeting in Brisbane? The possiblity of repeating Friday night’s scenario is increasingly likely now that everyone can easily make recordings with their phones and instantly publish them online at the same time as the police have been given extra powers to handle threats against G20 participants.

Given that such allegations can spread like wildfire on social media it will be very prudent for the QPS Media Unit to be honest and upfront with the public to defuse possible trials-by-social-media. They will also need to work as closely as possible with journalists so the right information can be made available to the public in an attempt to defuse the spread of disinformation on social media: a lack of information can often encourage erroneous speculation.

Below is the video QPS Media Unit claims to have been taken down from YouTube. If the CCTV footage is also made available this article will be updated.

What is your opinion regarding this incident? Could the QPS Media Unit handled it better and do the public need to see the CCTV footage? Post your comment below.