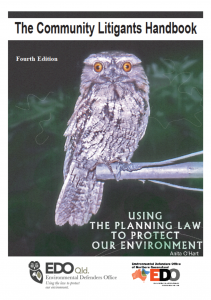 The EDO handbook is an invaluable resource for activists

The Queensland Environmental Defender’s Office has been a West End land mark for decades. Nestled next to Sol Breads across the road from Mick’s Nuts the EDO has taken on governments of all flavours for years – most recently supporting local residents taking on the might of Hangcock Coal in the Gallilee Basin. See related story.

Yesterday, the Abbot Government announced it was cutting off funding to all the EDOs around the country, effective immediately. While we have come to expect a horror story a day from both State and Federal government, this one is particularly nasty.

What it is doing is taking out all the organisations that have the capacity to hold it to account, to make it behave within the law, to make it honour its international and constitutional obligations,

“This decision by the Federal government demonstrates the lack of respect that this government has for the many Australian communities using the law to stand up for the places they love and keep decision-makers accountable.” said Michelle Maloney, the Chairperson of the EDO. “They are terminating a four-year funding agreement only six months into the term.”

“It is outrageous that the Federal government seeks to silence the voice of communities,” said Jo Bragg. “Our clients are local communities trying to stand up for their local environment. EDO Qld has helped many of Queensland’s communities stand up against powerful vested interests from rural communities concerned about massive coal expansion to groups trying to protect  the Great Barrier Reef. This is a crucial access to justice issue.

“This news comes a week before Christmas, leaving staff and communities unsure of the path ahead. It’s a major blow and puts a big hole in our funding but we would like to reassure our supporters that we remain committed- the earth still needs a good lawyer. The generous assistance of our supporters will help us be a strong voice for Queensland’s communities.