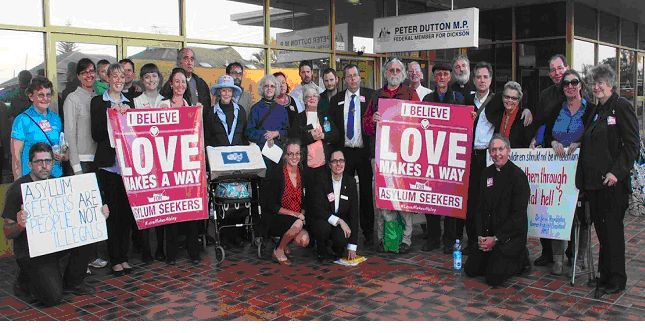 A protest at the office of Health Minister Peter Dutton MP has seen eleven Christian activists – including Westenders Terry Fitzpatrick and Dave Andrews – detained before being released without charge.

The abusive treatment in detention of children seeking asylum in Australia has touched a nerve.

There is much concern over the adverse impact prolonged detention has on the health of children. The facts are clear. A recent Australian study of children detained for more than one year found that:

o          50% presented with persistent physical health problems
For Christians who believe we should treat each refugee child ‘as if they are Christ Jesus himself fleeing Herod the Great’, this treatment is totally unacceptable. Which is why Christians from Brisbane churches have written letters to The Hon Peter Dutton, as Minister for Health, asking him to intervene to ensure the immediate release of all children from detention.

But none of us received a single reply to our letters. Not one. Not even a perfunctory form letter.

Recently, Paul Young, the chief psychiatrist responsible for the care of asylum seekers in detention for the past three years, publically shared his findings. His interview with The Guardian suggested the government was in a state of denial, the immigration department refusing to accept the IHMS statistics, which ‘revealed damage to children and adolescents held in prolonged detention’.

So it was on September 9, during Queensland Child Protection Week, 30 Christian leaders from various denominations held a prayer vigil at the Health Minister’s office in Strathpine, with the intention of remaining in prayer in the Minister’s office until Mr Dutton undertook to act decisively to ensure the health of all children in detention by quickly securing the release of all children under 18 from mandatory detention onshore, Christmas Island and Nauru.

The police were called and asked those of us in the office to leave. But we politely refused their request. As a result, eleven Christian leaders, including ministers from the Uniting and Wesleyan Methodist Churches, a Catholic priest, A Sister Of Mercy, and three Anglican priests were detained. Terry Fitzpatrick and I were also detained. We were all later released without charge.

This action was part of a growing movement of Christians round Australia called Love Makes A Way. Following in the footsteps of Jesus – who was an asylum seeker as a baby, when his family fled from Herod to Egypt – Love Makes a Way believes love will make a way for all vulnerable suffering people – fleeing oppression, persecution and war – to be cared for with dignity, empathy and respect.

Nine previous Love Makes a Way prayer vigils have been held interstate, including in the electorate offices of Tony Abbott, Joe Hockey, Scott Morrison, Julie Bishop and Bill Shorten, with more than sixty participants arrested. This was the first in Brisbane.