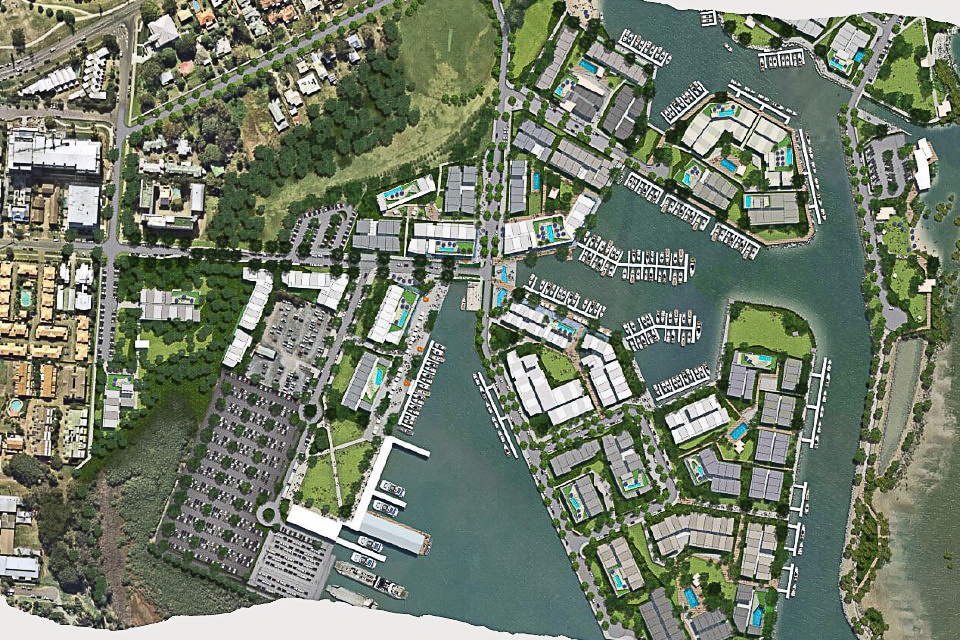 Opponents of a plan to build a town on internationally-recognised wetlands and a marine park are gearing up for the release of an environmental impact study (EIS) of the project.

The Queensland and Federal governments appear to be conspiring to allow construction, with the State Government having signed an infrastructure agreement for the project and former Environment Minister Josh Frydenberg having rejected his Department’s advice that the development is ‘clearly unacceptable‘.

The Redland City Council, which instigated the project, makes decisions about the project in secret and is fighting to hide relevant documents from its ratepayers. In addition, public consultation has been ‘flawed and deceptive’, says community group Redlands2030.

The EIS, requested by Mr Frydenberg, is due to examine the Toondah Harbour Project, which plans a town the size of Innisfail off Cleveland’s coast, east of Brisbane.

It has to show:

“.. how a net benefit will be achieved for the Moreton Bay Ramsar site.”

The equivalent across Australia would be to show how building a town in the waters of Coffin Bay or Wine Glass Bay or in Daintree Rainforest or Warrumbungles would result in an improvement to their environments.

Even the developer admits the project will have a ‘significant impact‘ on nominated ‘listed species’ or a:

“… threatened ecological community, or their habitat.”

If it goes ahead, an exclusive town of 3,600 homes aimed at the “affluent” will stretch up to 800 metres out to sea on Ramsar wetlands, that the Federal Government has pledged to protect.

Outraged environmentalists have launched petitions demanding that the governments stop the destruction of habitat depended on by:

The project ‘is not a market-led proposal’, a company acting for the developers says:

“… it did not originate from the private sector or from the Proponent specifically.”

Nor was it electorally driven. Karen Williams, the Mayor since April 2012  made no mention of wanting to develop Toondah Harbour in a detailed pitch before her election.

In May 2013 the Redland City Bulletin reported:

“Toondah Harbour is set to be transformed into a transport and recreational precinct after Deputy Premier Jeff Seeney declared the ferry terminal a development priority on a visit to Redlands on Thursday.”

According to the story, it was the ferry terminal that was the development priority. There was no mention of residential development, merely a quote from Mayor Williams who said:

“…she expected the precinct to include a convention centre, accommodation and restaurants around the terminal.”

The public was asked for development ideas in 2013. An undated State Government site carries answers to questions. There is no mention of housing in the bay.

However, traffic experts Cardno started preparing a report in July 2013 on the basis there would be 1,705 homes and a ‘development core‘ jutting into the bay.

By January 2014, the project had become a residential and tourism hub and small print in a State Government document referred to ‘higher density’ housing on a ‘pier/land reclamation area’.

But a Council survey regarding development at Toondah in February 2014 contained no reference to building out to sea.

But this contradicted the survey which could only say:

“… the main theme appeared to be in favour of an upgrade.”

In March 2014, Mayor Williams promised the environment would be a “major consideration” but buried four paragraphs from the end of a long announcement.

“…we know we need 800 residential and commercial units to pay for it.”

There was no mention of these units being on the wetlands.

But this contradicted the survey which could only say:

“… the main theme appeared to be in favour of an upgrade.”

In March 2014, Mayor Williams promised the environment would be a “major consideration” but buried four paragraphs from the end of a long announcement.

“…we know we need 800 residential and commercial units to pay for it.”

There was no mention of these units being on the wetlands.

A month later, the City Council released an artist’s impression of the proposal with three huge blocks of units stretching out into the sea in a straight line.

A resident complained about the deception and secrecy:

All of the technical documents for the TH PDA were completed prior to the public exhibition of the plans and were in the hands of Council. They were not available at the Council Chambers nor at the library when I went to read them during the public notification period.

I formally requested, three times, that the Council release the documents but my requests were not responded to … The Council continues to blunder on regardless, hiding information so the community won’t know how marginal this project really is.

Planning was undertaken by the Queensland Government and Redland Council and a final development scheme was approved on 29 May 2014 but it would be a further 18 months before these details were revealed to the public.

In a submission to a Senate Select Committee Inquiry Chris Walker, Secretary of Redlands2030, said people had been ‘duped’ in the consultation process.

The Labor Queensland Government, which had opposed the priority development area (PDA) legislation while in Opposition, shocked many people on June 14 2015 when it ‘formally endorsed‘ the project.

Opposition frontbencher Jackie Trad had told Parliament in 2012 the Opposition could not support elements of the legislation that was targeted at:

“… powerful mining companies and wealthy developers, to the detriment of the rest of the community.”

On November 25 2015, Redland City Council News announced the release of the master plan for Toondah Harbour with ‘a range of residential options‘. No numbers were given.

But in line with previous subterfuge, Redlands2030 discovered a business page on the Council website from the same day saying there would be:

Over three years, the project had transformed from improving a ferry terminal to building a new town in the protected bay, a process which had “outraged local residents and environmentalists”, Redlands2030 told a parliamentary committee..

With an average of two people in each home it will be roughly the same size as  Innisfail in Queensland, Forbes in NSW, Ararat in Victoria or Collie in WA.

Redlands2030 objected to the secrecy which had surrounded the project and in October 2017 launched a right to information request for access to agreements between the Council and Walker Corporation.

When the Council refused to release 589 of 680 relevant documents, the Assistant Information Commissioner decided there were no grounds for such a refusal.

‘In summary, I note that the Project represents a benefit to a private entity, Walker, to develop significant area of coastal publicly owned land and waters (most of which are protected under the Ramsar Convention) for commercial gain.’

And she pointed out:

‘I also consider in circumstances such as these where Walker has made large donations to both political parties that this significantly furthers the requirement for transparency and accountability.’

But the secrecy continues, with an appeal yet to be finalised.

Council hid details of the project from its ratepayers on May 23 2018 when it agreed to the master plan, with the minutes recording:

“Council resolved to ensure that the report and annexures remain confidential.”

The 2017 infrastructure agreement shows parts of the development overflowing the PDA area on page 63. It still applies but Walker Corporation submitted a new plan on June 5 2018, still with 3,600 homes in the bay.

Massive and prolonged opposition has tagged the project as highly undesirable real estate.

There are several other petitions, including one of 1,136 people and in face-to-face questioning of 678 people by Redlands2030, 85 per cent opposed the plan.

Only eight of 1,419 submissions to the Federal Government did not oppose the project.

What is particularly telling is that in an 81-page analysis of 583 public submissions by Minister Seeney in May 2014 he failed to say how many objected to the project. Each petition counted as only one submission.

In last year’s State Election, first-time independent Claire Richardson won more than a fifth of the 30,000 votes in Oodgeroo, which includes Toondah, by campaigning against building a town in the bay.

The State Government’s support for the desecration of the bay goes against everything  Labor has stood for in this regard.

It was a Queensland Labor Government that initiated both Moreton Bay Marine Park and the Ramsar listing with a commitment to protect the wetlands, and local MP Daryl Briskey reminding Parliament in 1990 of a previous fight to stop a canal estate at Toondah.

“It is our duty to ensure that those wetland areas survive.”

“Labor will protect Ramsar-listed and other wetlands across Queensland by ensuring that nearby development does not cause adverse impacts to wetlands ecological and hydrological values.”

The issue reached the ALP National Platform in this resolution:

“…notes Toondah Harbour is a Ramsar-listed wetland…Recognises the importance of Ramsar listed sites to migratory wading birds…[and] Commits to protecting Australia’s intertidal habitat on which these birds depend.”

A recent claim is that the Toondah project could ’emulate and even surpass’ development such as the Greenwich Peninsula in London, with its tower blocks of units, university, 20,000-seat entertainment arena, new offices and jobs.

The Redland City Bulletin portrayed the claim as being a University College London report but in fact it came from a company called The Business of Cities.

“… on the opportunities that arise from the urbanisation of jobs, business, and capital.”

The study was commissioned by the Walker Corporation.

A spokesperson for Walker Corporation said:

“The master plan showing 3,600 apartments formed part of our financial offer which was signed off by both Council and EDQ (Economic Development Queensland) at the time 3,600 units is the yield necessary to fund all of the community and tourism enabling infrastructure, facilities and amenities at no cost to the taxpayer or ratepayer, as required by the tender.”

He said the total cost would be $1.3 billion. An average sale price of $361,000 for the site of each home would provide the $1.3 billion. Every increase of $10,000 on that average price would result in a profit of $36 million to Walker Corporation.

“Council has always said the project needs to stack up environmentally and like everyone I am keen to see the science and will be watching the outcomes of the Federal EIS closely.”

“The State Government should “stop the rort” and just ‘fix the port.” 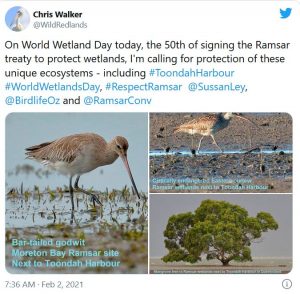 This story was first published by Independent Australia and is republished here with permission. The original is at this link: https://independentaustralia.net/environment/environment-display/proposed-development-on-protected-wetlands-raises-community-fears,14869
Feature image -Artist’s impression of the proposed development on reclaimed land. Department of Environment and Energy

Steve Bishop is a journalist and author. You can read more from Steve at stevebishop.net.