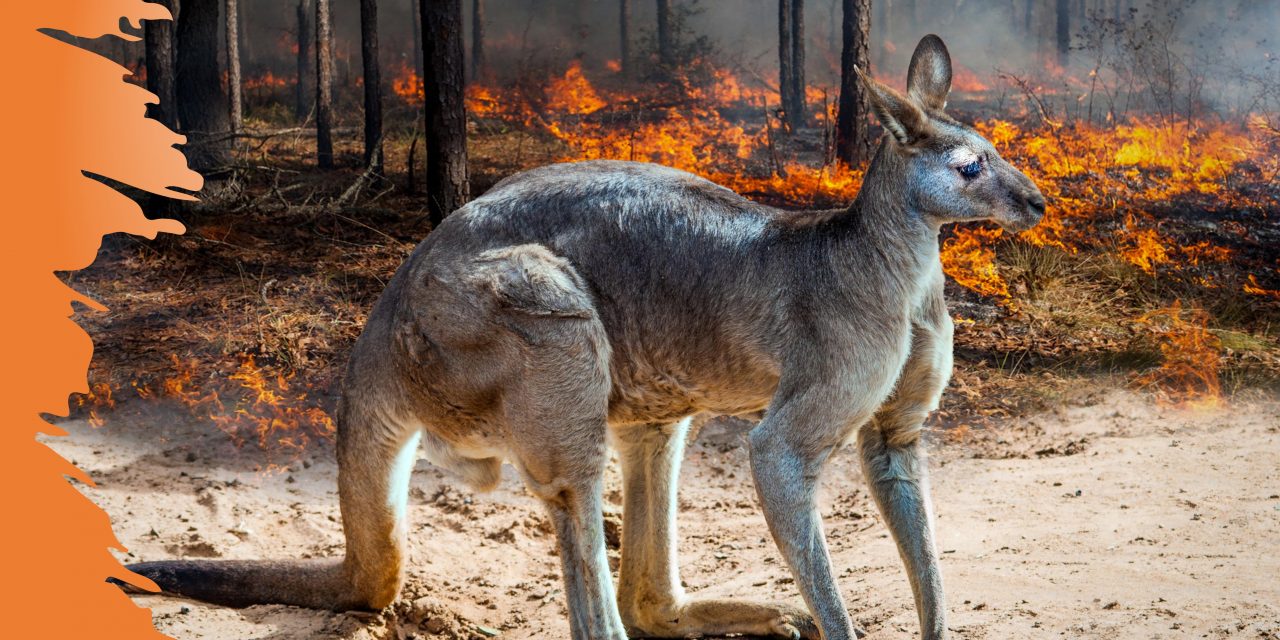 When she says Queensland is ready for the new economy, the State Minister for Environment Meaghan Scanlon[i] gets it right. In its Climate Action Plan for 2030, launched recently, we are reminded that Queensland is home to:

We could add our established infrastructure – ports, industrial hubs and transport networks – to that list. 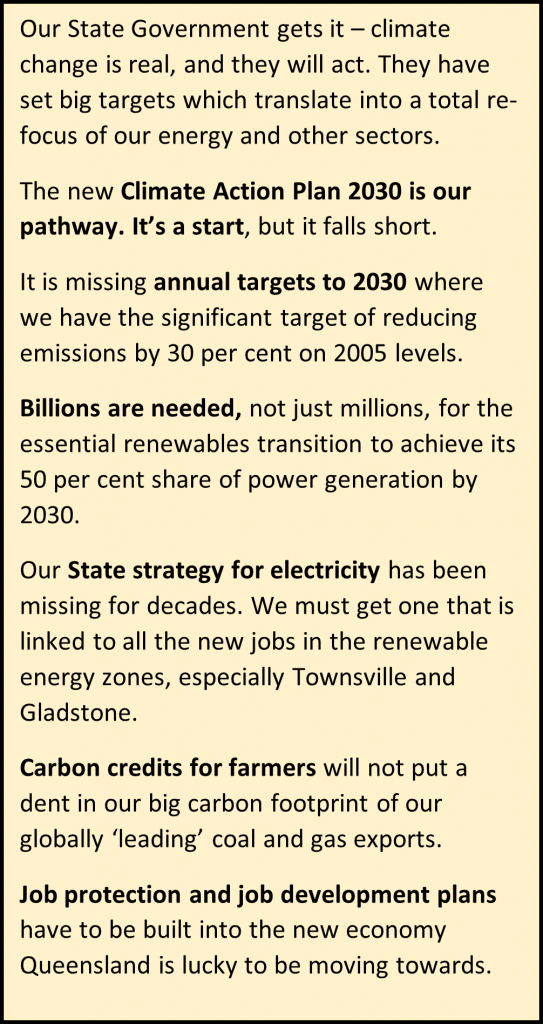 With all this going for us here, how well does the Plan spell out our pathway to the big stretch targets the State set for 2030 – 50 per cent renewable energy target for power generation and a 30 per cent emissions reduction on 2005 levels?

On the flip side, how well does the Plan drive down the threats to climate, how far does it go ‘leaving our state’s carbon in the ground’?

Queensland is the leading emitter out of Australian States. Scope 1 emissions are those from controlled sources such as power and industry plants.

Thankfully this Plan does embrace the Paris Agreement’s essential target – net-zero emissions by the State by 2050 – through its big third goal. This brings us in line with our biggest industry players. Earlier this year, mining giant Rio Tinto joined BHP in committing to net zero emissions by 2050 and announced it would spend $1.5 billion over the next five years. The Mineral Council of Australia has caught up and has adopted that target.

The National Farmers Federation and the beef industry – another significant exporter for the State – have also committed to the target.

As if these signals were not sufficient, our biggest export customers are voting with their targets. Statements making big commitments to the Paris Agreement were made last year by South Korea, Japan, China, and Taiwan, all working towards net-zero by 2050.

Climate science stresses another big point – the urgency to act now and not wait until 2050. What we (that is, all governments everywhere) do by 2030 will determine our effectiveness at giving the planet the best chance to remain under 1.5 degrees increase. This State Plan is our pathway for this decade of action that will make that real difference.

Billions (not millions) are needed for our Energy Transition

The State’s plan continues renewables investment – $2 billion over five years, building on the $4 billion spent since 2015 on large-scale renewable energy projects with a proportion of these publicly owned.

This is not going to get us to our stretch targets. West End economist Sebastian Vanderzeil[i] has reviewed these investment amounts and sees the inadequacies for what will be a massive re-focusing of our power industry:

“Building an industry takes tens of billions – the three major Queensland Coal Seam Gas projects (Gladstone LNG[ii], Australia Pacific LNG, Queensland Curtis LNG) cost $70 billion. This is the magnitude of investment, public and private, required to get an industry going in a short period. Contrast that to the $60 million hydrogen industry announcement. It is a pittance if you want to have any real industry in the next decade or more. Go harder now!”

Peter Casey, local LEAN (Labor Environment Action Network) secretary and former power engineer, sees the challenge as two-fold: maintaining our 60 per cent public ownership of the energy industry as we move to renewables while also building at least three major solar farms (>100MW) per year to build the three GW promised to meet 50 per cent renewables target for 2030.

He urges the State to get our electricity sorted into the big strategic direction and a staged rollout. Articulating any real strategy has been delayed for several decades by debates about privatisation as well as investment, or not, in renewables, as well as dysfunctional regulatory frameworks where renewables are concerned. 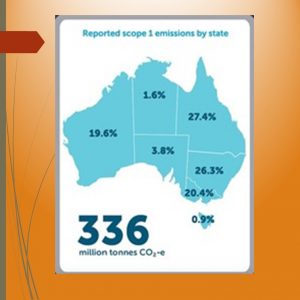 A jobs protection plan, as well as our emission targets, are at stake. Our coal-fired power stations will close in the coming decade or two. The fire at Callide 4 this year is an opportunity to make the move away from high emissions generation.

The essential jobs protection plan is a good way of ‘sucking the fear’ out of the coal-fired power plant closures, setting up the big direction and committing to the steps along the pathway.

Scale-up in the right sectors is the message. The latest report on Renewable Energy Zones, the planning vehicle for regional restructuring around new energy, argues the returns on investment are there.

Using Gladstone and the Hunter as case studies, the report by Beyond Zero Emissions argues there is the potential to transform the manufacturing base. For example, renewable Energy Industrial Precincts could support a total of 45,000 new ongoing jobs by 2032 and generate $13 billion in annual revenue in these two regions alone.

Electric Vehicles, a race, not a marathon

Biden has just announced half of all new cars produced from 2030 have to be electric!

Australia ranks almost at the bottom of the OECD ladder regarding uptake of Electric Vehicles (EVs). However, electrification of the transport system is fundamental for the new economy. In the Plan, creating the world’s longest network of electric vehicles with 50 charging stations planned across the State is a start.

Ellen Roberts of Solar Citizens, which is campaigning for a full strategy for EVs, says the Government must do more to make EVs affordable for Queensland drivers.

The Plan contains the flagship policy from 2017, the $500 million in the Land Restoration Fund. Minister Scanlon reported that ‘after our first round saw more than 600 jobs created, 1.8 million hectares of land restored and more than 1.9 million tonnes of carbon out of our atmosphere, so we’re putting the call out for even more projects’. As Minister Scanlon states:

“this move to more ‘regenerative agriculture’ means winning over farmers to new ways of land management and creating a market for the funds to flow as credits.”

While there are definitely good ecological, social, and economic reasons to promote our land and water management (how about a stewardship payment to farmers?), soil and vegetation carbon is not the magic bullet for the scale of carbon reductions needed. In addition, state opposition questions the achievements under the Restoration Plan, seeing the fund as having had a slow start – just $2.7 million spent to date (Member for Bonney, Sam O’Connor, press release).

Sebastian Vanderzeil questions this being a key pillar of the Action Plan, it is not enough money, and its impact on carbon drawdown will be too slow.

“Bio-sequestration and soil carbon is like wetting the roof when your house is on fire. We have taken tens of millions of years of compressed biomass (coal) and its gas (natural gas) and burnt it. Spending $25 million is insignificant, and bio-sequestration cannot be a centrepiece of any Climate Action Plan. It is just not going to make a big enough contribution to put a dent in global CO2-e levels.”

The State of our emissions?

Queensland was once a national leader in state-based pollution reduction measures, seeing our emissions decline from 2005 to 2013 mainly due to power generation improvements and controls over extensive land clearing. But this downwards trend reversed in the last five years. The 2030 Plan shows in 2018 our emissions were the highest in the previous decade with a drop then in 2019. With these fluctuations, it is hard to judge whether the Minister’s assertion that we are halfway to reaching our 30 per cent reduction by 2030 target is the correct interpretation or not.

We have to set annual targets to achieve this s-t-r-e-t-c-h goal of 30 per cent by 2030 emissions reduction. This means identifying the key sectors and the key actions that have to be taken to deliver the needed progress. It means big conversations across those sectors about incentives, investments, and partnerships. It means having bridging programs to ensure jobs justice and protection of workers in the phasing out and emerging industries.

The analysis of emissions by sector is also of interest – the Plan does not unpack our energy industries emissions. It analyses waste, land use, agriculture, and industry, but not energy which makes up ~40 per cent of our State emissions.

The plan does have other key initiatives around reducing emissions from waste and keeping carbon in the ground by increasing the listing of protected areas. However, these initiatives are relatively low-hanging fruit in the emissions reductions scheme of things, and they should be well underway. Energy efficiency despite being a big reduction tool (a la Craig Reucassel’s ABC programs) never gets the attention it deserves, perhaps a result of our electricity use generating revenue for government-owned power companies.

While we will be funding farmers to ‘leave carbon in the ground’ as a State, we are one of the world’s top exporters of carbon globally.

Where Queensland has benefitted from its minerals base, globally the pressure is on corporations, governments and communities to work together and do their utmost to end all climate destruction practices. As a start, governments have to cease approving all new high emitting mines. They will be stranded assets when the world goes renewable.

For Queensland, this is the transition needed, designing our alternative exports and getting out of exports based on fossil fuels. Queensland Treasury’s snapshot of our exports (see figure 1) shows our skewing towards fossil fuel-based exports. Note: much of this revenue goes overseas via corporation profits.

This is the real game-changer for our climate, and our Government has its hands full making the necessary climate commitments in the face of this picture of our revenue and assets base. This picture is under pressure now, it is undergoing market shifts in light of world sentiment moving on from fossil fuels.

Sizing it all up

Still talking economics, Queensland has a lot at stake from climate costs.

The Great Barrier Reef economy supports 70 000 jobs, a multi-billion-dollar asset at risk of ‘Endangered’ listing on the World Heritage register of UNESCO in 2022.

University of Queensland economics Professor John Quiggin estimated the economic cost of the 2019-20 bushfires as $100 billion, mainly driven by health costs such as breathing all the micro-pollutants from the smoke and ash. Not to mention the cumulative cost to our atmosphere of all those emissions from fires.

The cost of one significant climate-intensified cyclone, flood event or drought makes all of this investment look pitiful. But, on the other hand, every dollar we spend now on climate action has real economic benefits in reducing the economic impact – why not go hard now and enjoy the clean air later?

So, our Climate Action Plan …will it get us there?

Investment and engagement are two critical commitments in the Plan. The Plan is headed in the right direction, but it does not deal with contradictions in our fossil fuel dependence in our energy sector and our export economy.

Its centrepiece has to be the strongest strategy for transitioning to  50% renewables with a 30% reduction in emissions across every sector. This is to be underpinned by a fully planned Electricity in the New Economy strategy addressing long term tensions, challenges and big opportunities in respective areas of generation (renewables Vs fossil fuels), distribution (those poles and wires into the big REZ’s) and retailing (those electricity bills). 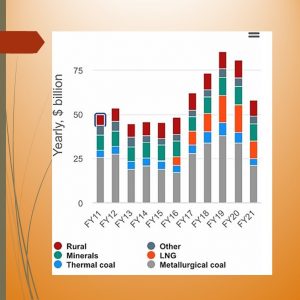 Essentially, the plan as it stands has two bob each way; it’s a set of bibs and bobs, with gaps where fundamental strategies underpinned by the correct scale of investment of money, expertise and innovation are needed.

Minister Scanlon said the Government would be engaging with Queensland’s industries and communities over the coming months to build on future action. That’s a good sign and an essential first step. Hopefully, the unions will be at the table as well

[i] Sebastian Vanderzeil is the author’s son.

[i] Minister for Environment and the Great Barrier Reef, and Science and Youth Affairs