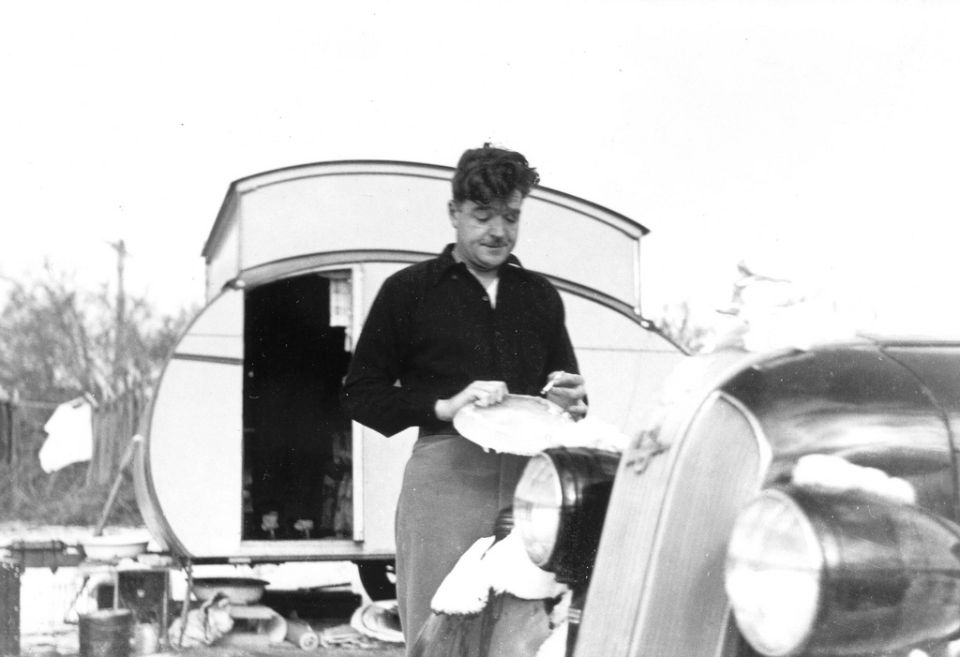 Lennie Lower was born in Dubbo, New South Wales. Educated in Sydney, Lower joined the army for a brief time before turning to journalism, where his talents as a humorist soon gained him a legion of dedicated fans and a place in Australian history. He wrote up to eight columns each week for a variety of newspapers in Sydney during the Depression and World War II.

Lennie Lower wrote the novel Here’s Luck in 1929. This novel deals with the twists and turns of fate befalling Jack Gudgeon and his feckless son Stanley. When Jack’s wife Agatha suddenly leaves them, both go it alone on a wild rampage through Sydney’s race courses, gambling dens, pubs and cafes. Cyril Pearl, a noted Sydney journalist and Lower’s editor, described Here’s Luck in the following terms: “It remains pre-eminently Australia’s funniest book, as ageless as Pickwick or Tom Sawyer, a work of ‘weird genius’, as one reviewer put it, written by a ‘Chaplin of words'”.

Lower’s drinking was ‘legendary’ hence the titles of his two best-known works. ‘Here’s luck!’ is a well-known Australian drinking toast, as is also ‘Here’s another!’. Lower’s piece ‘Must Drink Beer’ announces that the ‘perfect job has been found’ – beer tasting for a research institute. Lower’s description of the domestic consequences of drunkenness and hangover, have the ring of long experience about them.

Lennie Lower wrote for many Australian newspapers and magazines, including The Daily Telegraph (Australia), The Sunday Telegraph, The Labor Daily and Smith’s Weekly, until his death from cancer in 1947 at the age of 43.

BANKING: HOW SHE WORKS

Being an Heroic Attempt at an Explanation

A rudimentary knowledge of banking and banks does not necessarily imply the possession of a bank balance. One might as well demand that anti-vivisectionists be partly vivisected so that they may back their antipathy with personal and acute experience.

My actual experience in the matter of banking is such that if all the notes I had banked were placed end to end they would reach . . .What’s the lineal measure for atom?

While in my callow youth, and spurred on by the fierce pangs of love, I banked ten shillings. Two days later I reluctantly withdrew it, and my account was closed forever. If Sunday had not intervened I might have had it out earlier.

This rambling explanation is intended, not so much as an apology, as a proof that one needn’t have money in the bank to have an interest in banks. All right then.

Small metal tokens of some intrinsic value and colored strips of paper- which, in the middle of the Sahara desert, could only be prized in so far as their artistic merit appealed–are money.

Money is a means of facilitating exchange.

That is to say, the possession of a poundnote saves you the trouble of carrying five hundredweight of home-grown potatoes down to Anthony Horderns’ when you wish to buy a pair of boots.

Likewise, the institution of the monetary system prevents the boss from paying you in alarm clocks.

The first man to become wealthy accumulated his hoard very slowly. Finding himself with a surplus of pumpkins, he swapped a few of them with neighbors in adjoining caves, for stone clubs bear–skins, and whatnot.

Nature pursued its relentless course and foisted more pumpkins on to him. By degrees he accumulated an enormous stock of bear skins, etcetera, as well as pumpkins.

Came a drought or an earthquake. We forget now which it was. The bears died off in hundreds. For want of a feed of pumpkin the stoneclub maker was too weak to make stone clubs.

(This is where we deviate a little from historical accuracy, for the sake of the analogy.)

The drought or the earthquake eased off, and Nature took up her burden of making bears.

But things were very bad.

One day a man came to the cave of the pumpkin millionaire.

“Look here,” he said, in his simple, straightforward way. “I’ve got an idea for growing woad plants. There’ll be a big demand for woad presently, and it’s a great proposition.”

“Well?” queried the wealthy one languidly. “What about it?”

“I’m broke,” answered the other. “Will you finance me?”

“What security have you?”

“Well, I’ve an extensive cave, fur-lined throughout, in a good defensive position, free from pterodactyls; also four wives, two being practically new and the other two so thoroughly domesticated that they grovel every time I raise my club. I should say the lot was worth about 100 stone clubs or 300 pumpkins at the present rate of exchange.”

“Eighty clubs should be sufficient to put my woad plantation on a working basis.”

They went into details. At last the pumpkinaire, after convincing himself that there was a good demand for woad, that the intending borrower was a hard worker, and that he knew all about woad, decided to finance him. He accordingly financed him with fifty clubs, taking the hundred club’s worth of cave and wives as a security.

At the end of the year the borrower was to return sixty clubs for the fifty lent.

The woad plantation got under way, and that was that.

Men in adjoining caves heard of the enterprising woad planter’s success, and came in droves to the cave of the pumpkinaire. If he fancied their projects and liked their security, he financed them.

Now, this is where the funny part comes in.

Everybody knew that the pumpkinaire was wealthy, and one day a man came to borrow thirty bear skins, as he was converting his cave into flats. And the pumpkinaire didn’t have a skin in the place.

This is what he did.

He said: “Take this smooth, stone with the funny mark on it to the fellow over the river. Tell him to give you thirty bear skins, and when he returns that stone to me I’ll pay him.”

The fellow did as he was told.

Said the man over the river: “It’s a bit unusual, but I know the pumpkinaire. He is a man of wealth. He always pays up. This stone is worth thirty bear skins any old day in the week!”

It worked, you see, and the pumpkinaire thought deeply on the matter. He began to see that it was only a matter of a big reputation, a few stones, and faith on the part of the stoneholders.

The stone came back; the pumpkinaire paid up, and lent the stone out again. It circulated. People began to know that it was worth thirty bear skins.

The pumpkinaire got more stones, and marked them with his private mark. The day came when he had 3000 pumpkins’ worth of stones in circulation and only 500 pumpkins. It made no difference. People believed in him.

Now, let us consider. If in his eagerness to grab the banker made 1000 stones when the total value of all the goods in the community was only 500 stones, he inflated the currency. The stone that was supposed to be worth 30 bear skins would only be worth 15 bear skins.

The money wealth of the community would be 1000 stones.

Possessed of only 500 stones’ worth of real wealth, the community has to pay back to the banker 1000 stones, plus interest. (Be patient. It’s dreadfully difficult to keep from getting tangled up.)

Now you can see that with its measly 500 stones the community will have to work like mad, twice as hard as they ought, to pay back the banker’s thousand.

You can see that 5,000,000 American dollars is–or is supposed to be- 5,000,000 dollars’ worth of American goods. We may do what we like with the money, buy English goods if we like, but sooner or later, by the simple process of exchange, that money must go back to America. And in America that five million represents five millions’ worth of goods.

Wiping the sweat off our eye-shade we pause for breath, and admit that we have bitten off more than we can chew.

Banking is a big subject, and stretches as far beyond the scope of this article as a verbatim report of the proceedings at the Tower of Babel.

Like trying to put your pet whale in a glass bowl to fraternise with the gold-fish.

But stop cheering. We haven’t finished yet. Sorry.

We would just like to point out the possibilities, the ramifications and the power of banks and bankers.

We would like to point out that the business of banking is something that affects you–even if you haven’t got a “crab” to your name.

You can see that the big bankers can promote industry, or put the brakes on it simply by giving or withholding loans.

You can see that they are the Master Minds behind the capitalist.

You can see that they hold us in the hollow of their hands.

Do you see the necessity for Government control of banking?

A comprehensive selection of Lennie Lower’s work is available at http://gutenberg.net.au/pgaus.html#lower