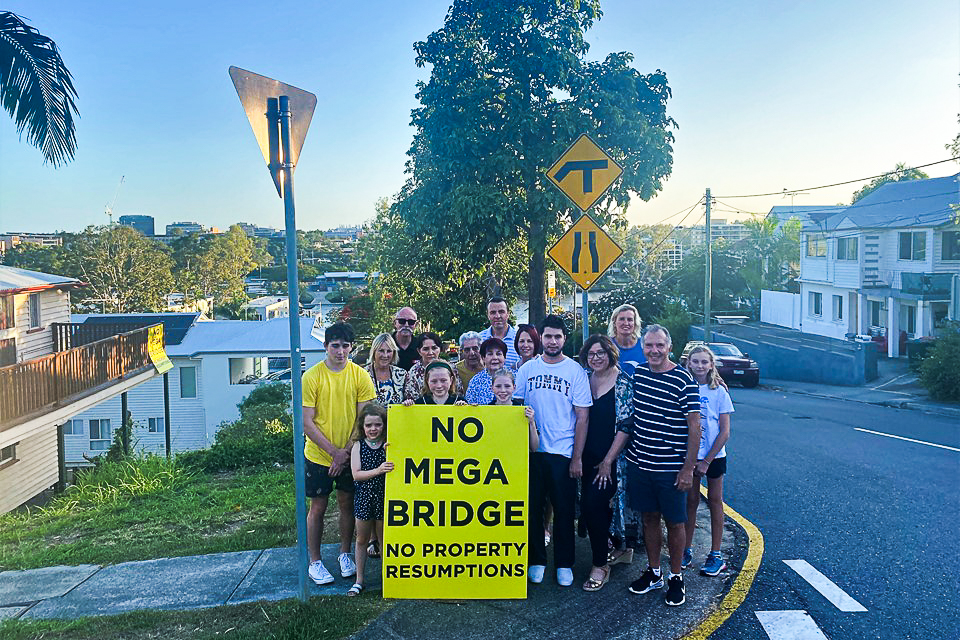 Within days of Brisbane City Council announcing the next phase of consultations for Green Bridges to West End, a new residents’ group has formed and is raising objections to one of the proposed options: a Keith Street to Boundary Street bridge between West End and St Lucia.

In recent correspondence to residents and on its website, Council has outlined three options for a West End and St Lucia bridge. Their favoured Option A involves landing sites on public parklands on either side of the river, at Guyatt Park and Orleigh Park. Option B proposes landings at Munro Street and Ryan Street, and will involve the resumption of private properties (vacant land), and Option C outlines Keith Street to Boundary Street landing points (as far up as Paradise Street), with the potential resumption of private homes.

It is this last option that has raised the ire of Boundary and Paradise Street residents.

Aleko Paltoglou, media spokesperson for the Boundary Street, “Stop Mega Bridge” residents’ group says that the Keith Street alignment Option C,  is the only option that results in the resumption of family homes. He says this option will have a detrimental impact on the amenity of the street for surrounding residents who would be living under or beside a bridge if Council were to proceed with this option.

“It is unheard of to have a piece of infrastructure the size of what is being proposed in the heart of a populated residential community. Green bridges do not belong in a highly populated and established residential area of two-story residential homes,” Mr Paltoglou said.

The groups says that the Boundary Street to Keith Street bridge alignment has a range of deficiencies including:

Mr Paltoglou said the residents of Boundary Street cannot understand why Council’s proposed bridge alignment resembles the alignment of the State Government’s 1997 Briztram proposal, when this bridge is supposed to only be for cycling and pedestrians.

“It’s a mega bridge for what’s being planned.”

Have you been approached by Council?

Asked if the affected residents had spoken with Council, Mr Paltoglou said the owners of the three residential properties subject to potential resumption, including his own home, were approached by Council to discuss the Boundary Street to Keith Street alignment.

“We were shocked when Council informed us that a potential Green bridge from Boundary Street to Keith Street would result in the resumption of family homes and detrimentally impact the amenity of surrounding families.”

“We believe that Council should develop an option that is beneficial for both people and parks,” Mr Paltoglou said .

The residents of the southern end of Boundary Street have arranged to meet other community groups and with Councillor Jonathan Sri in the coming weeks to discuss their concerns.

In its literature, Council also lists several deficits posed by the Option C alignment. Council notes, for example, the steep grade of Boundary Street, the impacts on the streetscape, the resumption of homes at the West End side of the river, and loss of trees at the St Lucia end of the bridge.

Councillor James Mackay, a former president of the St Lucia Community Association has said in a Facebook post that he would like to protect Guyatt Park and is therefore opposed to Option A in favour of Option C.

Across the other side of the river, Cr Sri representing the Gabba Ward has questioned Council’s justification for the St Lucia Bridge and has called on Council to provide more details.

“I remain a tad dubious that the business case for the West End-St Lucia bridge will stack up,” Cr Sri wrote in a Facebook post.

“As a group our objective is not to pit community against community, rather we want to highlight the deficiencies with Option C so the community is informed and can provide feedback to Council.”

Mr Paltoglou said that is why he is urging people to provide feedback to Council.

The group has established a petition at this site:  https://www.change.org/p/help-us-stop-the-mega-bridge-is-west-end/c

For more details on this proposal see the Council’s website: https://www.brisbane.qld.gov.au/traffic-and-transport/roads-infrastructure-and-bikeways/green-bridges/st-lucia-to-west-end-green-bridge

Green Bridges to West End get tick of approval, but busses ruled out.