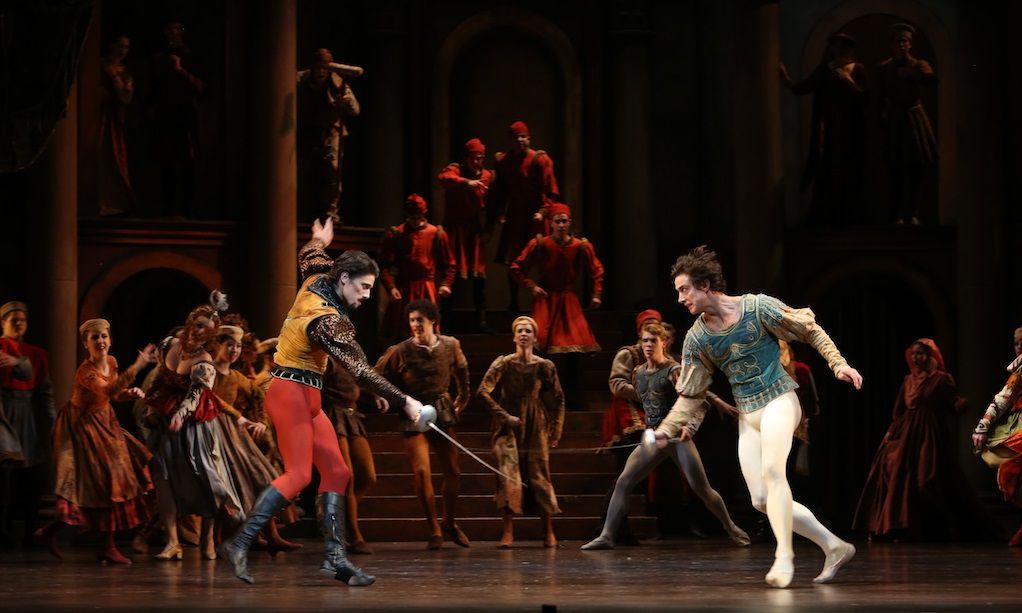 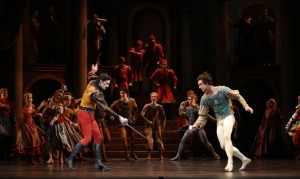 Tybalt and Mercutio cross swords in the market square

Kenneth McMillan’s Romeo & Juliet has not been seen in Australia before. That it is now here in Brisbane, with some of the British superstars occasionally in lead roles, is due to the hard work and vision of Queensland Ballet Artistic Director, Li Cun-Xin. Life-long dancer and corporate juggler, Master Li has set out to create a world class ballet company here in Brisbane.

Romeo & Juliet is the physical expression of that plan, writ large. Audiences love it.

McMIllan’s choreography was daring in 1965 and remains powerful fifty years later. As you would expect of an Englishman it is faithful to the bard’s text but as a young man at the height of his creative powers, McMillan brought new expression to a classic art form. He was not afraid to bring the sex implicit in the work right into the fore or to send up some of the sillier parts of the discipline.

Mercutio’s extended death scene is almost parody, a precursor to Monty Python’s Black Knight twenty years later. THe3 choreography of the sword play is part-musical, part theatrical and part vaudeville. By contrast, the parting-is-such-sweet-sorrow scene simply and powerfully evokes the impossibility all new lovers face when separating after that first, mind-blowing bonk. We have all been there and Prokofiev’s score and Macmillan’s choreography carry us of into those tender memories. The Bard had a way with words, Macmillan and Prokofiev do it with human bodies.

Prokofiev’s 1940 score had challenged the Russian Ballet and won acclaim with audiences for twenty five years before Macmillan got the chance to reshape Leonid Lavrosky’s production thanks to a boycott of the British by the Russians. His rendition was further blessed by Nuryev and Fontaine, who only danced it because of internal politics in the British ballet scene. As is often the case, this rich series of accidents brought a masterful work to the pinnacle of success.

The sets and costumes we see at QPAC’s Lyric Theatre have been loaned by the Birmingham Ballet. They are sumptuous, classical and stunning. This is the technology of ropes and canvas or an earlier era refined and preserved in the arts.

Australian audiences, on the whole, are grateful for the opportunity to catch up on culture that has not been readily accessible here. We are such stickler’s for tradition that we plan to keep the Queen on our coins even if the Brits do not.

Of course, that does not satisfy everyone.

The diamond and sapphire empress grew up on Goethe and finds Romeo and Juliet’s obsession with romantic love somewhat puerile. As a Lifeline support worker she knows that suicide usually has more to do with money and terrible guilt than unrequited love, whatever teenagers flooded with hormones might feel.

MacMillan also assumes a certain familiarity with Shakespeare, almost evoking key phrases familiar to English speakers with his staging. In some instances the lack of words creates problems for newcomers to the tale. Why does Juliet recover from her vial of poison, when Romeo does not? What is the threat from her parents that makes it important to feign death in the first place?

Another friend and contemporary dance teacher was disappointed by the emphasis on tradition and the constraints on artistic freedom which that enforces.

Regular readers of Westender know that I love contemporary art forms that push the envelope. Shadowlands remains my favourite work of the year, so far. Regardless, the middleclass evolutionary in me wants to maintain a healthy respect for the classics and build on, rather than knock down the centuries of discipline that have gone into refining them.

Master Li’s strategy appears to be a combination of bringing the world’s best here, challenging and developing our local talent and building the framework on which a new generation might build creatively.

It is a strategy appropriately tuned for the current Government’s penchant for the corporatisation of the arts and the top-down delivery of culture.  A survivor of China’s Cultural Revolution and the boardrooms of Australia’s finance sector, one can assume that Master Li will trim his sails as he must.

The Queensland Ballet is in good hands. Now, let’s bring down the ticket prices.