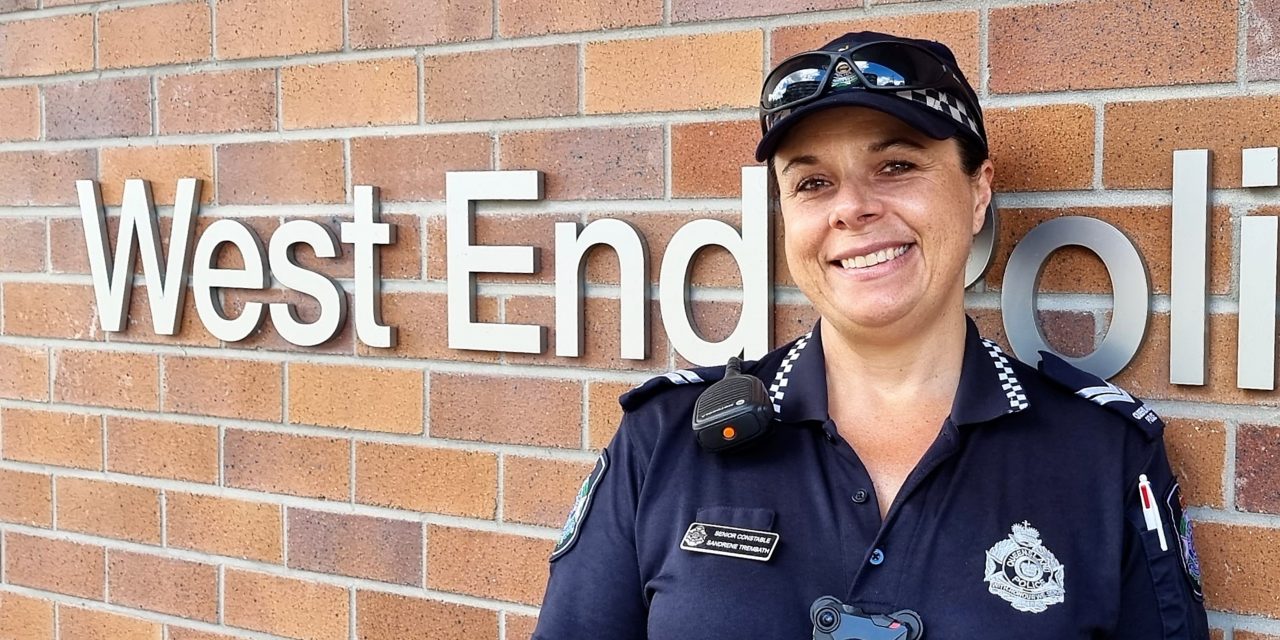 Senior Constable Sandrene Trembath, Sandi to many, has worked as a Community Beat officer in West End since 2014. Over the past eight years, she has earned the respect, and genuine affection of many in our community.

The values Sandi brings to policing were recognised at this year’s Queensland Women in Policing Awards, where Sandi was awarded ‘Most outstanding female practitioner’ by the Queensland Police Service (QPS) to recognise her unique work as the West End Community Beat Officer.

This is not her first award. In 2020, Sandi was one of six QPS officers recognised for their ongoing service to the community that went above and beyond their policing duties. In that award, Sandi was recognised for building trust with vulnerable people in the community through her knowledge of various cultures, predominantly Aboriginal and Torres Strait Islander people, and those who suffer mental illnesses and trauma.

Sandi has been described to me as “deadly”, “compassionate, caring and committed”, and “calm, quiet, and confident.” Several told me, “We need more Sandi’s”, and the consensus from all I spoke with is that her style of policing is a valued contribution to the safety of our community.

For a modest person, the Award has brought Sandi some unwanted attention, so it took a while for me to get her to agree to an interview. But she relented, and after taking me on a West End Police Station tour, Sandi and I finally sat down outside a local café to talk about how she came to policing and her approach to the job.

From Alternative stuff to the QPS

Within the structured Police environment, Sandi prefers the flexibility of community policing and likes to work the beat on her own.

She grew up with the freedoms of a farm child and did not know what to do when she left school; after a stint at university, she took up travelling. For a time, she got into what she calls “alternative stuff” while living in northern New South Wales.

“I’d been at uni, worked in hospitality, did massage therapy. I just wanted to explore. My dad died of cancer when I was quite young and I didn’t want to get sick, so I started to read a lot of Wayne Dyer, and Louise Hay – I wanted to unwrap my emotional world.”

Sandi didn’t consider joining the Police until some years later, when as a single Mum, she needed a new job and direction. She thought about becoming a paramedic, but a friend recommended the Police.

“I started at the police academy in 2004 with a four-year-old as a single mum: it was crazy, thinking back. And I also finished my degree in business management and communication.”

Sandi still considers herself a spiritual person and brings those values to her work in the QPS.

“I believe that one of the greatest things you can do with your life is to help others in whatever form it may take to help people heal. So I try to bring that to my work every day. And I do believe that society is a reflection of how we treat our most vulnerable.”

After some years of general duties and then crime prevention, Sandi was selected in 2014 as the West End Community Beat Officer, a role created some years before.

“She also needs to maintain a high level of visibility, interact freely with community members and undertake a community liaison role where she maintains close rapport with stakeholders, other service providers, retailers, and other occupants of premises within the beat. “

Senior Sergeant Douglas said Sandi exceeds in all these areas but also consistently goes the extra mile for people she may have reason to engage with, “because she genuinely cares for people as individuals.”

Sandi told me that people can be too ashamed or proud to ask for help, so she says her approach is to build a relationship of trust so that people feel safe asking for help. Sandi is often able to link people up with services and assistance – often practical things, like a new bed, food, or accommodation.

“You might say to them, “Is there anything I can get for you?” A lot of it is networking and coordinating and having conversations, often just gentle conversations, about little things, and then bringing everything together.”

Senior Sergeant Douglas said one of the most valuable and outstanding aspects of the way Sandi performs her role, is her close and collaborative relationships with the key community agencies that support vulnerable people.

“… people on the margins of our community who may be experiencing homelessness, affected by mental illness, managing illicit substance and alcohol addiction, experiencing domestic violence, are attempting to reintegrate in society following custodial sentences or a combination of those factors.”

West End is a unique community and Senior Sergeant Douglas said it requires a tailored approach to police work.

“Sandi delivers that unique policing response on a daily basis with great personal commitment and dedication: our local community should consider themselves pretty fortunate to have a Beat Officer of that calibre working for them.”

The service providers I spoke with enthusiastically supported this assessment.

Saad Farooqui, manager of the Street to Home outreach program at Micah Projects, told me Sandi meets with him and other stakeholders every Friday to discuss support for people who are sleeping rough.

“Sandy has more information about the needs of people … she gets hold of us if there’s someone who’s in need of immediate support, because we’ve got nurses on our team and mental health workers.”

“So instead of people getting incarcerated or going into the watchhouse, it’s better if we respond with nurses to see what the actual issue is.”

Saad said Sandi works with a “trauma informed lens”, understanding that the people she and Micah support have often had bad experiences in institutions, foster care, and churches.

“And Sandi, being part of that institution does really well to break down barriers and is a good example of someone from QPS who understands people’s stories and is not enforcing the power she has. That’s really impressive.”

Kylie Deen at West End Community House told me that what impresses her about Sandi is that she always turns up.

“Sandi comes down to all of our events …she knows everybody, and she has that beautiful level of connection. I cannot articulate how great Sandi is for us in this community space. She has come to all of our stakeholder meetings around the kiosk and has really played a big part.”

Sandi is the “adopt a cop” for West End State School (WESS).

“We see her for special events, but probably the most significant contribution we have from Sandi is her support for our school community,” WESS Principal Kim McNamara told me.

“For instance, this is a very pragmatic example, but when the traffic lights went down straight after the floods, and we had kids returning to school, we texted Sandi and she was down there making sure all our students arrived safely.”

“Most afternoons or mornings when she can fit it into her busy schedule, she comes down and helps us with the drop-off and pickups with our preps and our year one students.”

Ms MacNamara said Sandi takes special interest in different families that she knows through the community.

“She absolutely connects with people on all levels. She’s just amazing. We love Sandi, and we love the fact that she supports us.”

Dan Rennie, Manager at Triple-A Murri Country told me Sandi provides an example of community policing that he thinks comes from her essential kindness.

“She has taken the time to understand First Nations communities; to work with people. Her first words to people are not, “What are you up to?”, but “How are you going? Can I help you? “And that makes a world of difference to the way that people feel supported,” Mr Rennie said.

Many of the traders are also thankful for Sandi’s support along the busy shopping strip.

“Sandi is probably the best example of community policing I have ever seen. I think if we had more Sandis, a lot of other communities would be much safer,” Fiona Stager of Avid Reader told me.

“She is approachable, she’s very considerate. I’ve seen her de-escalate a lot of situations on Boundary Street. So I feel confident calling on her, because I know the situation is not going to get out of hand. Which is not often the way. Often people fear ringing the police station because you don’t know how they’re going to come in. But Sandy is calm, quiet, confident, and strongly spoken.”

One of the most telling moments for me was Sandi’s reception at People’s Park when we visited there together – though people were shy about talking, Sandi is clearly liked and respected by the First Nations people who meet at the park.

Sandi said that people often have little concept of intergenerational trauma experienced by some of the people she encounters each day. These include childhood trauma, abandonment, domestic violence, alcoholism, growing up in abuse and poverty, and foster care.

“And you know, they are some of the loveliest people – they share so much with each other. They look out for each other despite everything they’ve been through.”

The poverty and distress Sandi encounters on the job, does take a toll.

“There are times when I go home, and I’m just physically, mentally, and spiritually exhausted. And I do cry. I do cry.”

As we went inside to pay for our lunch, the café manager, who did not know why we were meeting, thanked Sandi for her work, saying. “Without you we would not be here.”

Sandi does not look for compliments but it must be satisfying to know her work means so much to so many in West End.

Reflecting on her award, Sandi said she feels “embarrassed, self-conscious … but it was unexpected, and I feel very grateful and honoured to be acknowledged.”