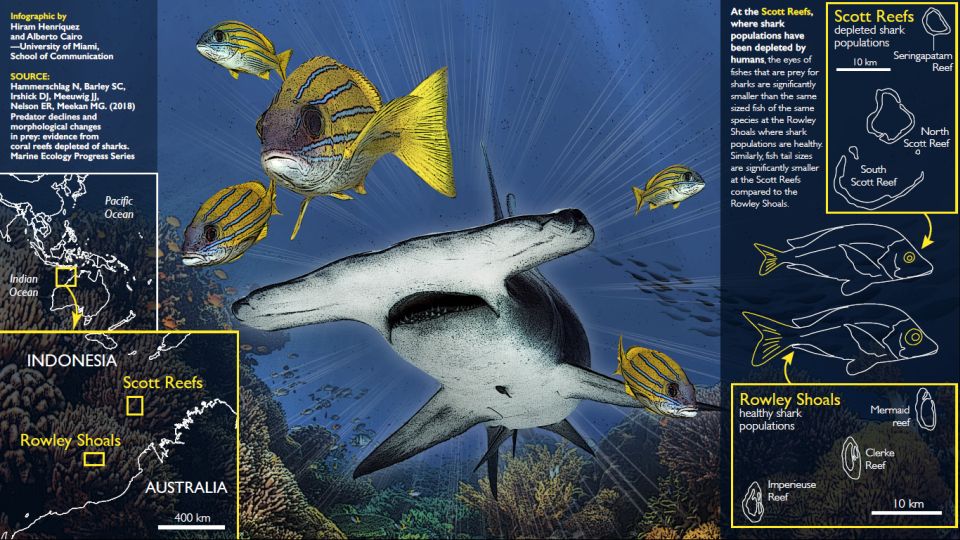 Scientists at The University of Western Australia have discovered evidence of body shape changes in fish due to shark population declines from overfishing.

Researchers from The University of Western Australia, Australian Institute of Marine Science, University of Miami (UM) and the Rosenstiel School of Marine and Atmospheric Science analysed seven different fish species from two neighbouring coral reef systems off the coast of North-West Australia.

The findings shed new light on the cascading effects that the loss of the ocean’s top predators is having on marine ecosystems.

Targeted shark fishing has intensified in the region in recent decades to fuel the demand of shark fin soup. As a result, shark populations have been decimated at the Scott Reefs, but remain healthy at the Rowley Shoals.

The research team collected 611 fish from seven species across multiple sites within the Rowley Shoals and the Scott Reefs. They then took photographs of each fish and digitally analysed photographs, measuring body length, body width, eye area and tail area of each fish.

At Scott Reefs the researchers found the eyes of fishes that are normally prey for sharks were on average up to 46 per cent smaller compared the same sized fish of the same species on reefs at the Rowley Shoals.

The same pattern was seen for fish tail sizes, with tails being up to 40 per cent smaller at the Scott Reefs compared to the Rowley Shoals.

Shanta Barley, a postdoctoral fellow at The University of Western Australia who conducted the fieldwork said there was a need to understand the consequences of shark declines.

“The differences in fish body shapes between the two coral reef systems could have consequences for energy flow throughout the ecosystem, ultimately impacting the food web,” Ms Barley said.

Lead author Neil Hammerschlag, a research assistant professor at the UM Rosenstiel School and UM Abess Center for Ecosystem Science and Policy said the removal of sharks by humans had potentially caused a reduction in the size of fish body parts that are important for shark detection and evasion.

“There is an urgent need to understand the potential cascading ecosystem consequences of shark declines, especially on coral reefs that we rely heavily on for tourism, food and recreation.”

The results are significant as sharks are among the most threatened animals globally. The consequences of the removal of the wolves-of-the-sea are increasingly recognised as far-reaching.

“Predator declines and morphological changes in prey: evidence from coral reefs depleted of sharks,” is published in the Marine Ecology Progress Series.