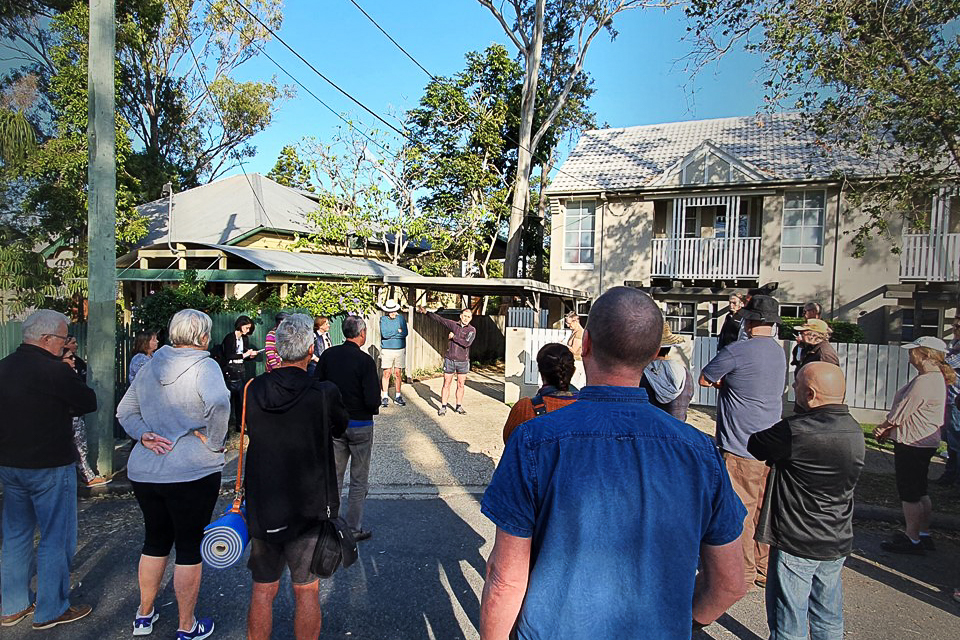 About 30 local residents met in a suburban street in West End early this morning to talk with local member Jackie Trad about poor traffic management in the area.

Vikki Uhlmann, who called the meeting along with residents of Rogers, Raven, Ida and Mitchell Streets (often referred to  locally as the “little streets”), said that rat-running has been an issue for some years. However, concerns were recently heightened when they discovered that the carpark for the Ballet Centre redevelopment on Montague Road will have cars entering and leaving via Raven Street.

“I was stunned because it’s a little street,” Ms Uhlmann said.

Ms Uhlmann said she has met with the Ballet Centre[1] and was very pleased with their understanding and sympathy, but the issues of rat-running still need to be resolved.

Residents attended from a range of nearby streets to express their frustrations with the lack of proactive planning by Council to address the traffic and safety impacts of new developments. They cited, for example, the new Montague Markets on the corner of Ferry and Montague Roads which is due to open in September and includes a full-sized Woolworths store and other retail. 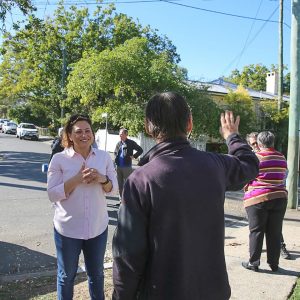 Apart from rat-running, residents raised concerns about traffic speeds, pedestrian safety, particularly the safety of children, and increasing car numbers: “speed, safety and volume”, as one resident neatly summarised it.

Residents of the little streets want to see some immediate relief.

“We can’t wait five years for that to happen. We need it to happen soon,” one resident said.

Local community group Kurilpa Futures was represented at the meeting by Maurice McCallum and others. Mr McCallum told the gathering that Kurilpa Futures members recently met with Brisbane City Council traffic planners and were dismayed that Council does not undertake traffic studies on the combined impacts of multiple developments. He said that Montague Road has not had a traffic study for up to five years, despite the number of new developments along the strip. Kurilpa Futures representatives said that they are seeking a comprehensive traffic plan that includes the Dornoch Terrace, Ganges Street and Drake Street corridor.

In response to the matters raised, Ms Trad said there is no doubt that the degree of infill and development occurring on Montague Road is having an extraordinary impact on community livability. She was also critical of what she says has been a piecemeal approach to traffic management in the area.

Ms Trad said that traffic management should be considered with a view to the impacts in other areas locally and across all peninsulas in Brisbane.

“We are a river city. And one of the things that I think Council wants to do, and I think is a good thing, is to connect different parts of the city where there are peninsulas. But we can’t talk about more bridges for West End unless we fix Montague Road and Dornoch Terrace, and unless the community understands what’s going to happen to these major roads, because all we will be doing is inviting more people into the Peninsula to access our services, our businesses, our local economy, without actually understanding how that is going to impact the local residents.”

Ms Trad said that the community is craving a masterplan for Montague Road, and she committed to pursuing the issues raised within State Government and with Council.

The group resolved to continue to meet and to agitate for change.

Ms Uhlmann said she is not surprised that wider traffic issues are being expressed locally.

“I was really delighted with the numbers that we had today and the level of participation, and the positivity in putting forward suggestions for change.”

Talking after the meeting, Ms Ulhmann said that local Councillor, Jonathan Sri, has been incredibly supportive of local residents and she would like to see both levels of Government working together on these questions.

Asked about working with Cr Sri on the problems raised this morning, Ms Trad said:

“What people are crying out for is collaboration and coordination, and all of us working in the same direction.”

[1] The refurbished Ballet Centre will have a 349-seat Studio Theatre built over three levels for full-scale Company rehearsals and performances. The new centre will also include cafes and bars.