Sturdy, not Shaky – Queensland’s economy beyond COVID and Coal 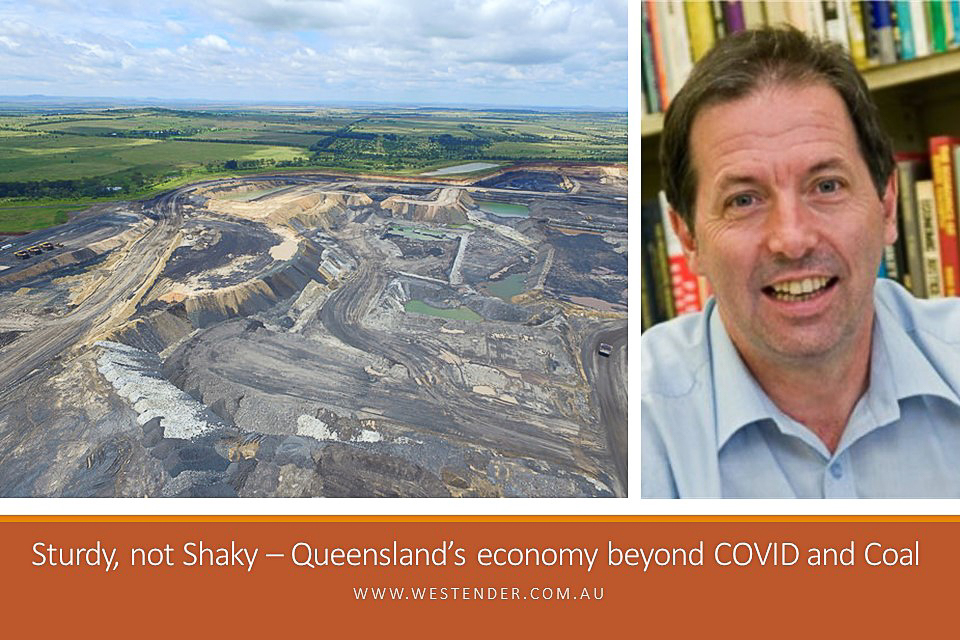 In August, leading economic researcher and commentator, Professor John Quiggin presented his work at a forum organised by Workers 4 Climate Justice on how we can ratchet up the decarbonising process in Queensland. He talked about why mining jobs are not what they seem, and what jobs will emerge when we transition to renewables, which he said is inevitable.

Coal-fired power is disappearing around the world, we are seeing significant declines in investment in new coal-fired power across Europe, the US (despite Trump’s promises) and Asia, and the winding back of the existing coal-fired power supply. China is the only player having another turn at coal after a big emphasis on renewables. Germany is setting the example world-wide with its smooth transitioning out of their coal mining, and out of coal generation.

Professor Quiggin said Queensland is trying to have it both ways (fossil fuels and renewables) and it would be preferable if we had a more direct and over-arching renewables strategy state-wide.

Mining jobs do not add up

Mining has been a vital economic sector, but its significance today is different, especially in relation to work.

Thermal coal has 25 000 jobs, not a large number nationally when we have three million people are on Jobkeeper.

Though the renewable energy sector has been hit hard by successive Federal governments, especially the Abbott government, it currently employs 20 000 people. This could easily increase to employing 50 000 if the many policy barriers were removed.

Out of those 25 000 jobs in thermal coal, about 5000 are the actual miners and drillers, while 8000 are white-collar workers who are generally city-based, and ~12000 are skilled tradespeople. In terms of loss of jobs from going beyond coal, it is highly likely that people in the white-collar and trades will find alternative work.

COVID has shown that our understanding of Australian jobs needs updating. Australian jobs are no longer heavily weighted towards the trades and there are many more people employed in Service work

In mining, some are good jobs, some are not. Union membership protects some workers but there has been an increasing trend towards contract labour. Increasingly people on $150K per year are working alongside people on $100K.

FIFO (Fly in-Fly out work) has reduced the meaningful sense of community in most coal-based communities. There is high turnover of staff in the mining industry, 30% per year, and this high level of movement in and out of mining jobs will make transition easier.

There are several Queensland towns in the Bowen basis that can be said to be reliant on coal – Moranbah, Emerald, Clermont and Dysart – though they are now largely reliant on FIFO workers. Historically these towns have had a more diverse economy. There is an excellent solar and wind resource in this Basin which offers transition opportunities, as well as tourism.

We have seen effective transition in Australia. In the Latrobe Valley the closure of the Hazelwood power station has been handled well, after late notice was given to that community.

Queensland is paid royalties ($7 a tonne average, making 1.7Bn a year return) but royalty-earning States, through the Federal Grants Commission, have their GST income payments adjusted depending on the royalties earned.

Thermal coal represents about 2% of GDP which makes it a low value commodity. Australia also pays international mining companies large amounts for equipment and borrowed money. Large payments go out of the country.

And climate impacts are costly:

Thermal coal represents 2% of GDP….the drought and catastrophic bushfires have cost a lot more than that.

Professor Quiggin argues that mining jobs are not all they are claimed to be, he says COVID has also taught us several things.

The cost of compensating workers for the transition out of thermal coal is about $25- 50 million a year. Over ten years this will amount to one week’s worth of Jobkeeper. And this would be an investment if we moved many of these workers into the construction of renewables. The call on the public purse is very small though public sector investment in renewables is to be encouraged.

COVID has shown us that, given the right reasons, Government will step into the labour market and offer real solutions. With the right motivation, Government can easily respond to the transition of the workforce.

First phase of going beyond Coal

Professor Quiggin sees the steps for Queensland to move beyond coal built on:

A price on carbon would yield a positive net return on all these initiatives.

The jobs pathway through this decarbonisation process

An orderly transition is possible, Professor Quiggin says, and there are many new jobs in the renewables-based economy. A solid commitment to workers and their communities will be necessary and this will mean ensuring:

The second phase of moving Queensland’s economy beyond coal will see a price on carbon and a phase-out of all fossil fuels.

“It can be done, and for the sake of our future, it must be done.”

Workers 4 Climate Justice hosted the forum at which Professor Quiggin provided a summary his report Getting off coal: Economic and Social Policies to manage the phase-out of thermal coal in Australia.

For the full presentation see HERE.