When superheros go to war 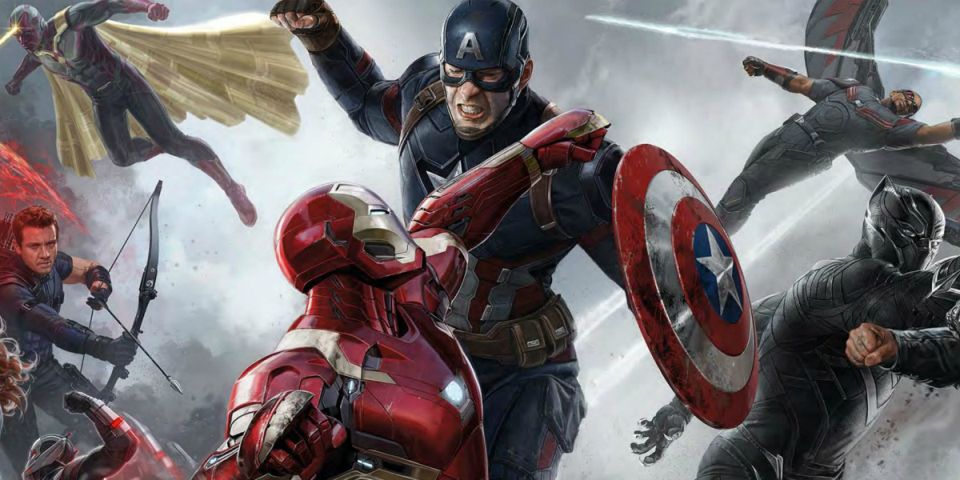 Captain America: Civil War is the third and final film in the Captain America series. This series may have started out in the weakest link in Marvel Entertainment’s series of superhero origin films leading up to the big superhero team-up in The Avengers (2012), but has become some of the strongest and most realistic-feeling material in the Marvel canon.

Civil War and its predecessor The Winter Soldier have both been helmed by the Russo Brothers, and the shift in tone and quality is instantly noticeable. Their Captain America is a stark political story in a superhero landscape, and this instalment deals with the idea of accountability. Being a third movie after two huge-scale adventures in the Avengers series, the dust is (literally) settling on the carnage that was created during the Avengers’ battles, and a series of governments have decided that these superheroes need to be registered – it’s too dangerous for them to keep operating out of societal laws. Half of the team – championed by billionaire tech genius Tony Stark – are all for various reasons happy to have someone impose some boundaries on them. The other half – championed by Steve Rogers a.k.a Captain America – are warier of signing away their control to the governments.

This is not a film that you should see if you’re not familiar with at least the previous film, and ideally the rest of the Marvel Cinematic Universe (MCU). Apart from being very confusing if you’re not familiar, this film is much more enriching if you understand why the characters make the decisions they do. This is why it’s such a strong entry in the MCU canon though – it seems easy from the marketing to pick a “Team” but when watching it, you realise the complexity of the conflict. Not to say that each team is as in the right as the other, but it’s understandable why they hold to their convictions so strongly. Perhaps it’s just because recently, before watching this film, I saw another conflict-driven superhero blockbuster film where the conflict was so muddled, nonsensical and devoid of emotional investment, but this stands out in sharp relief as a well written conflict between people with different emotional ties to each other, enhancing our investment because we’ve seen these relationships develop over several consecutive previous films.

Unfortunately, while several of the relationships shown are ones you might be invested in if you’ve been watching these films for a few years, one in particular is confusing and badly done – I wanted to like Sharon Carter, a secret agent who was briefly in the previous film undercover as Steve’s neighbour, but the combination of her not having much real importance in an already character-stuffed film and an underdeveloped romantic thread with Steve where she was revealed to be the great-niece of his love interest in the first film made me annoyed. Why is there an unimportant and perfunctory romantic plotline when there were events both recent and important to certain other characters, like Scarlet Witch (Elizabeth Olsen) that the film never spent any time on? In fact, she herself has a surprising semi-romantic plot of her own that even feels more real. If the emotional realism of the film stumbles occasionally, it largely it feels accurate to each character’s journey.

The Russo Brothers have described Civil War as Avengers 2.5 and in a way it does feel like that – not only is this the first non-Avengers standalone film to feature characters from the other films (giving it a nice sense of connectedness that the wide-ranging MCU sometimes loses) but newer characters appear here to pick sides and join the fray. One of the best is the first appearance of Black Panther/T’Challa (who will be the first black superhero to headline a Marvel film, in 2018) the prince of a small fictional African country. Chadwick Boseman is an up-and-coming talent and he’s eminently watchable as a more serious superhero, not having had a relationship to anyone involved and so just becoming involved when his personal goals clash with one of the fighting teams’. Also Paul Rudd’s Antman is an enjoyable source of levity in a fairly heavy film, along with newcomer Tom Holland’s Peter Parker/Spiderman (although you could be forgiven for having Peter Parker exhaustion – this is the third actor, and the sixth appearance of the character since 2002. This reviewer certainly thinks it’s time for a change up!)

All in all, the themes of this film are mostly topical and hold up as an interesting film even without all the context – the Russos and co. have created an interesting conflict that’s both political and deeply personal to the characters and it stands up as one of the best Marvel films to date. But watching this film without knowing the context would be doing both yourself and the film a disservice, so I recommend experiencing it if you’re already a fan.