The battle for Riviera: What is happening at 5 Dudley Street? 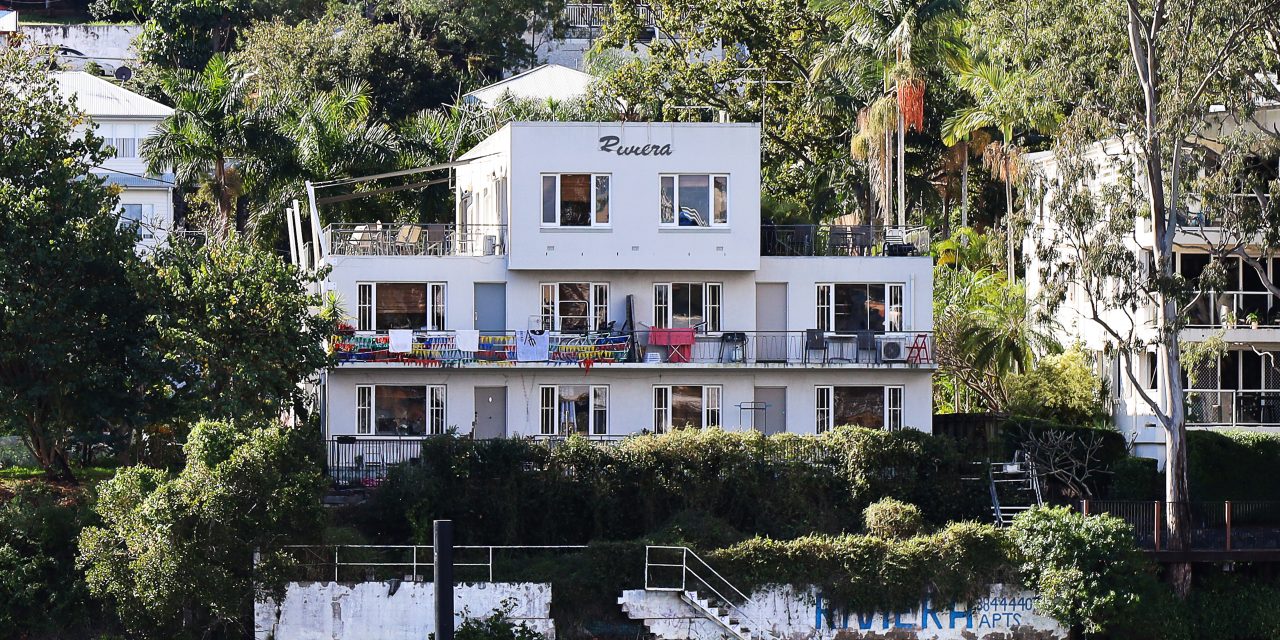 Free food gardening collective, Growing Forward is planning a rally in Bunyapa Park on Saturday 28 August at 2.30 pm against a development application that they say will result in loss of affordable housing and further gentrification of the suburb.

The proposal (DA A005732911) is for a 5-storey block of eight apartments at 5 Dudley Street to replace the 14 unit Riviera building next to a State-owned site where Growing Forward has been cultivating a food garden since April 2020. 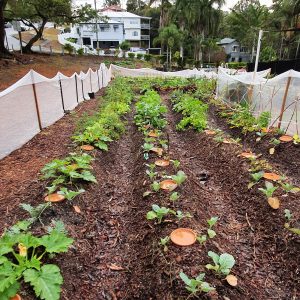 Council has determined that the development application by Bluebird is ‘impact accessible’ because its proposed height is above the zoned limit. Impact assessable applications require a merits-based assessment by Council to determine whether they are appropriate in the zone or not. Members of the community can make formal submissions to Council in support of or objecting to the proposal. However, as residents in the area know, the right to object does not guarantee that they will influence the outcomes.

The developer made public notification of its intention to proceed on 6 August 2021, so anyone wanting to make a submission has 15 business days from that date – ie, until Monday 30 August.

Pam Bourke, spokesperson for community group Kurilpa Futures says the DA is emblematic of the issues around gentrification and loss of affordable housing on the Kurilpa Peninsula.

“Our concerns with this development are as follows: the Riviera building is a landmark building in West End and shouldn’t be demolished, the developer doesn’t address the loss of affordable housing, the impacts on the existing tenants, why they allowed the building to run down over many years, the flooding risk, and the impacts on the established community garden. The building is bigger than allowable under the neighbourhood plan but has fewer apartments.”

Councillor Jonathan Sri has written a detailed post on his website about the development application. In his post, Cr Sri says he is concerned about the loss of low rental housing and notes that while the existing 14 units are not in particularly good condition, they are cheaper than most newer units in the 4101 postcode. In addition, Cr Sri says the development directly conflicts with the current City Plan and, if approved, will lead to “another wave of gentrification.”

“It threatens to demolish an existing block of affordable rental accommodation and replace it with luxury apartments. The desire for a large new sewer connection means this proposal would also dig up the neighbouring community garden,” Cr Sri wrote in a recent email to his constituents.

Cr Sri has encouraged residents to make a submission to Council objecting to the development and to join and support protest rallies and other forms of civil disobedience. 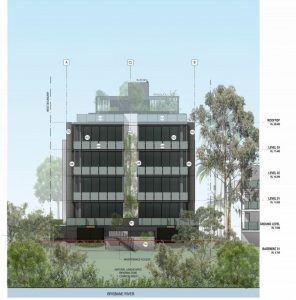 Growing Forward states in a Facebook post that their garden is under threat from the development. They also raise concerns about the demolition of the Rivera building at 5 Dudley street to make way for the new development.

“The proposal is to demolish a perfectly functional building, one with flats that are affordable to working class people, and build an expensive six-storey building in its place with all the green capitalist lies on the brochure like “carbon neutral” and “eco-friendly”.”

“They say they want to collaborate with us, whatever that means, but the reality is they’ll tear down a building, evict all the old tenants, destroy the garden, tear up the fruit grove, rip down the swing, take away the compost and the garden bench and the trees, put up an ugly six-storey building for rich people, wash all the waste into the river, and leave us with nothing.”

The developer vigorously rejects claims made on social media about their plans for the garden and say that they have been misrepresented. They say for example, that while there will be temporary disruption to the community garden of 3-4 weeks, it will not be destroyed. Furthermore, they say they have assured Growing Forward that they will reinstate the impacted garden beds and plantings after upgrades to sewerage infrastructure are completed. Bluebird says they have also met with Cr Sri to present their proposed development plans.

“I’m interested in exactly where the developers say they will get these ‘locally sourced produce boxes’ because I don’t know anywhere else in the 4101 postcode that’s growing the same volumes of produce as the Growing Forward garden.”

“Bluebird doesn’t own the block of land that the garden is on, so I don’t think they’re in a position to make any firm or reliable guarantees about reinstatement or the long-term future of the garden. If the State Government gives Bluebird permission to dig up the site, that’s a genuine threat to the garden.”

“This isn’t just about the garden itself – it’s about the replacement of low-cost medium-density housing with resource-intensive luxury apartments that don’t leave enough room for trees and which take up more space to house fewer people.”

Growing Forward representative, Ruby, told the Westender that the developer did engage with them early in the process but have themselves misrepresented the nature of the meeting in their statement and in their consultation report, where they claimed the meeting with Growing Forward was ‘supportive’.

“The reality is that the developer didn’t make any detailed or specific compensation offers, including boxes, and repairing damages in the meeting that we had. The first that we heard of any of this was through a comment on our Facebook page.”

Ruby said Growing Forward did not want to make a separation between the garden and the development.

“All developers offer nice things to the community they are evicting at first, and it’s always a lie.”

“They’ll try and twist it as much as possible. But I think ultimately, this is what developers do.”

Bluebird sent the Westender a statement which we publish below in full in the interests of informed debate. 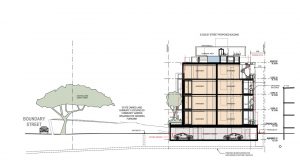 Over the past eight months we have personally met with many neighbours and residents to discuss what we hope to deliver at 5 Dudley Street, and distributed information to over 300 households who live nearby.

We have also met with Cr Sri to present the proposed development plans and discuss our commitment to protecting the community garden during the construction phase.

We met with Growing Forward earlier this year and again on 10 August. We have explained that the repair and upgrade works to the existing sewer line, which visibly sits in a portion of the garden, would take approximately 3-4 weeks.

We assured them that we would reinstate the impacted garden beds and planting, and would like to provide additional resources to make the garden more accessible and productive. We’ve also committed to funding locally sourced produce boxes to offset any lost production.

Among other support, we have offered to help relocate the existing compost system to another part of the park, which is potentially damaging the root system of the Poinciana trees.

We have also offered to explore how the group might be able to formalise the garden and benefit from the possible extension of the adjacent Boundary Street Riverview Park.

Growing Forward have refused to engage with us further, or explore how the wider community could benefit from this assistance, because they do not believe in private home ownership.

It has been disappointing to see that the calls for a community rally are based on the misconception that we are in some way destroying this special community project. That couldn’t be further from the truth and goes against who we are as people and as a business.

The existing building has a mix of tenants that also includes professionals, Airbnbs, and family members of the existing landowner. A number of the tenancies are short-term and turn over on a regular basis.

We commenced communication with tenants in January 2021, many months prior to lodging the Development Application and at least a year in advance of any possible construction works.

We have continued to reach out to them on a regular basis to offer relocation assistance if required, as well as project updates. To date, only one tenant has responded to our offer of assistance.

Site neighbours will be kept regularly informed of construction updates by a dedicated project representative.

Brisbane City Council sets out the process for making submissions in respect to development applications HERE.

Westender stories on local developments can be found HERE.

Items published in the Westender do not constitute an endorsement of the views or opinions expressed.

If you have any comments, you can add them at the end of this story.