The Day of the Troll 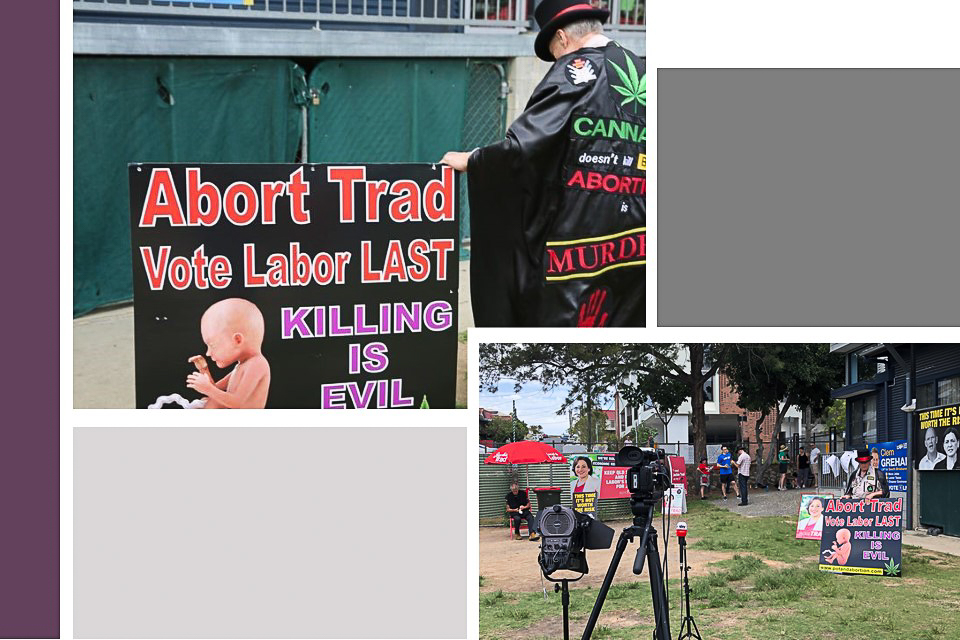 On Election Day an anti-abortion activist entered the polling area at West End State School with a sign depicting a foetus and a cannabis leaf, and the text, “Abort Trad, Vote Labor Last, Killing is Evil”. Only a few days before, Extinction Rebellion had stolen a Jackie Trad banner, vandalised it and dumped it at Parliament House with a load of manure.

Ms Trad posted an image of the two signs, saying, “I’ve been copping it from the far right and the far left.”

Dr John Jiggens, one of the seven candidates in South Brisbane, was incensed, and is the only candidate, apart from Ms Trad herself, who has called out the behaviour. Of course, if you don’t call out the one, it can be difficult to call out the other.

Dr Jiggens is now urging voters to write to the Electoral Commission of Queensland.

See from John Jiggens below.

As a candidate in the recent South Brisbane election, I am writing to complain about the hateful vilification of the former member Jackie Trad by a troll who was permitted by the Electoral Commission of Queensland (ECQ) to display a large Abort Trad sign in the school grounds at the very front of the entrance to the voting booths at West End primary.

This hate-filled troll also smeared me and my campaign for the legalisation of cannabis by wearing a cape with a cannabis leaf on it, and putting another cannabis leaf at the bottom of his Abort Trad poster. Because of the cannabis leaf, many thought he was associated with me and HEMP, who have used the cannabis leaf as our symbol in West End for over twenty-seven years. Some even thought the troll was me!

This is a sickening slander!

My campaign was grossly defamed by the troll and by the decision of the ECQ to allow him into the polling grounds at West End primary.

I found the situation extremely hurtful. It was terrible to see the lovely cannabis leaf so defiled by being associated with this ugly insult to a person so many of the South Brisbane community respect and love, and one who has suffered being pilloried over many years by the Murdoch empire who own all the newspapers in Queensland.

I did confront the troll angrily, but then Jackie Trad, who the troll had positioned himself within eyesight of, came over and asked me in a very gentle way to cool it. I explained the outrage I felt by his gratuitous misuse of the cannabis leaf, and she replied. “How do you think I feel? I put up with this all the time.”

The troll had also positioned himself in front of a Sky News cameraman, so I realised the optics could turn ugly; my blood pressure had gone sky-high and I was REALLY angry.

Things did not bode well.

I agreed not to make a scene and decided it would be best if I left. My corflute displayed a large cannabis leaf, and the troll was cowardly sheltering behind a cannabis leaf too, so naturally everyone would associate me with this despicable creep and his hateful sign, and loathe me.

I decided to find another polling booth and leave West End primary to the troll, so I picked up my corflutes and walked across the oval, but by the time I reached the gate I had decided I could not allow the troll to so dishonour the cannabis leaf!

After all, I was a candidate in the election; I had paid my fee and campaigned over several weeks! This creep was just a freakin’ troll! Why should the troll rule West End? Surely as a candidate, I had my rights? I would go to the ECQ and complain and find out why they had allowed the troll into the school ground!

I spoke to Gaysley Hagan of the ECQ and explained the problem that the troll created for me: he had appropriated the cannabis leaf that has been the symbol of HEMP in West End since 1993 and gratuitously associated it with his vile Jackie Trad troll and in doing associated my candidature with despicable little him.

People hated him, with his top hat and his crude cannabis cape, but most of all for that ugly ABORT TRAD text. The ALP had already complained about that and I wanted to find out why it had been allowed.

Before I begin my summary of this meeting, allow me to say Ms Hagan was polite and attentive and this is meant as a criticism of the ECQ rules, not her. According to Ms Hagan, under the ECQ’s new sign laws, third parties have equal rights with candidates to display signs. As long as the signs are authorised, with a name and an address, they are lawful.

I spoke about how offensive the sign was and Ms Hagan replied, “Unfortunately, it doesn’t seem to take any priority this year whether they are offending people.”

I would be delighted if you email Ms Hagan to inform her that the removal of offensive signs does take a priority with voters as well as with candidates like me and Jackie Trad, and I certainly shall be writing. I spoke to many of you at the school who were offended like me.

I wanted him removed.

This complaint too was dismissed on the grounds that the hemp leaf was not a trademark. So, email Ms Hagan or next election you can expect to see a new iteration of the troll with an Abort Amy sign, this time with cannabis leaves plastered all over it.

And who knows what will happen with my blood pressure then?

See an earlier piece from Dr Jiggens below:

Independent candidate calls out treatment of rival by Murdoch Press

John Jiggens is a writer, former academic and a journalist, who was the founding editor of the Westender and The Cane Toad Times and who has been a 4ZZZ journalist over several decades. John was an independent candidate for South Brisbane in the most recent State election.