The new member for South Brisbane faces the press 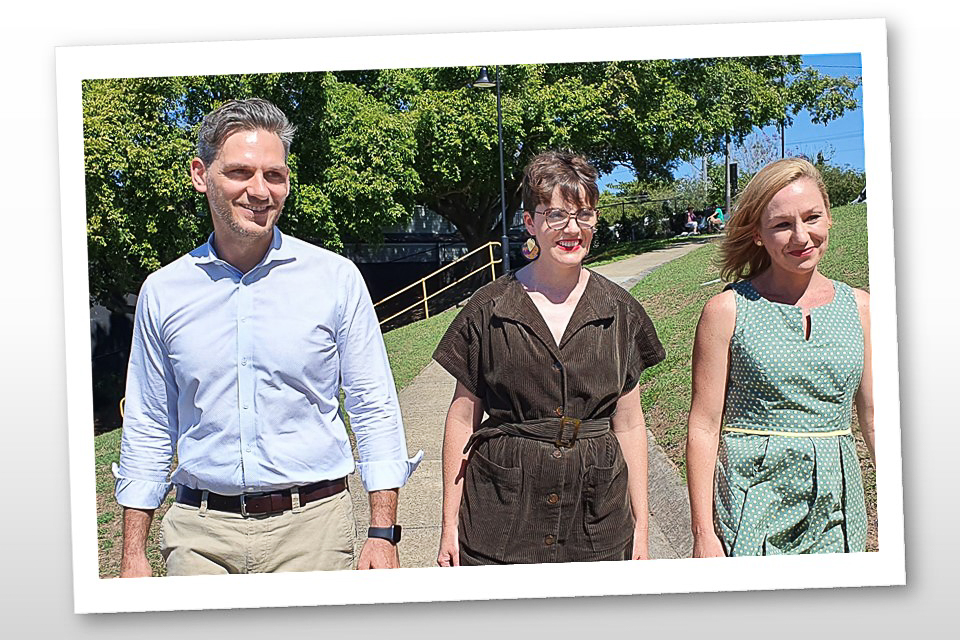 It is not often as a citizen journalist that I get to attend press-conferences: they are frequently at a difficult location or time. On Sunday, however, the first press conference for Amy MacMahon since her historic win in South Brisbane was just a short walk from home.

Press-conferences probably reveal as much about the media groups represented as they do about the people interviewed. The Courier Mail seemed intent on pursuing the issue of LNP preferences and Extinction Rebellion. The Brisbane Times reporter on the other hand was more concerned with how the party is going to influence a majority government to implement its policies and to act on climate change. These latter concerns are, I suspect, what many electors are now wanting to hear more about from the Greens.

When a party offers a sweeping package of reforms, it is often hard to know which policy or policies resonated most with the voters. My sense from talking to South Brisbane friends who voted Green is that their vote was primarily strategic. For some who know and like Jackie Trad, or who recognise that she has championed renewable energy within Labor, it was a painful choice. What they wanted most from this election was a result that would have put pressure on Labor to take urgent action on climate change. Oddly though, while renewables were part of both the Greens and the Labor platforms, the parties barely mentioned climate change or the reef during the election campaign.

For many in South Brisbane, Amy MacMahon is still an unknown quantity. Voters are wondering who their new member is, and most importantly, how she will bring together the community after a bruising and divisive election campaign. Of course, Greens supporters are deservedly thrilled with their historic achievement, but many others in the community are grieving the loss of a local member they liked and respected.

The first few questions from the media were predictable and revealed little. “Have you heard from Jackie Trad?” and “What did it feel like to win after Labor has held the seat since 1977?”

“Did the LNP preferences secure you this win?”

Ms MacMahon said she attributes her win to more voters putting the Greens first, enabling her to win the first preference vote.

“Amy, how are you going to be a different local MP to Jackie Trad?”

Ms MacMahon has studiously avoided any direct criticism of Jackie Trad during the campaign, but those who know Ms Trad well might be surprised by the implication in Ms MacMahon’s response.

“The Greens approach to politics is about going out and communicating with people face to face and having a really good understanding of what’s going on in the community.”

Ms MacMahon added that she expects to be able to get some good work done for the community with Jonathan Sri on Brisbane City Council, and with the Greens now holding the State seat.

We finally got to the questions I most wanted to hear about. How will the two Greens members work with a majority Labor Government? After all, we had all heard Deputy Premier Steven Miles say on Saturday night that Labor would not work with the Greens in the next Parliament.

Ms MacMahon said she and Mr Berkman are looking forward to sitting down with the Labor Party and talking about their positions and “having a productive next four years in government.”

“We will be in there pushing those issues that we brought to the campaign. We will continue to fight for things Queenslanders need …” Michael Berkman said.

“… we absolutely need to see stronger action on climate change …”

“Do you realistically think you can achieve any of the policy proposals that you put forward in the election?”

“The question is for the Government whether they’re going to take the steps necessary to give people the things they need to make their lives better, or whether they’re just going to continue to side with those vested interests in the mining billionaires and the big banks and the developers,” Mr Berkman said.

Next up was the inevitable question on Extinction Rebellion. Labor has strenuously maintained that The Greens are the political wing of Extinction Rebellion, and they, in turn, have been accused of focusing more on the group’s tactics than on their concerns. Issues surrounding the group boiled over in South Brisbane on the Thursday before the election, when Extinction Rebellion stole a Jackie Trad banner, defaced it, and dumped it at Parliament House with a pile of manure.

On Sunday, Ms MacMahon refused to be drawn on these tactics, as she had done with me on Thursday.

“Look, I think, regardless of what you think of that particular protest technique, this is the result of people feeling so frustrated with a political system that doesn’t listen to people. People only engage in protest and civil disobedience when they’re faced with a political system that is no longer meeting their needs; that is no longer listening to them.”

“Do you intend to emulate, Jonathan Sri and join in protests?”

Ms MacMahon said she has been involved in many protests over the last few years and doesn’t intend to stop now she is an MP. She was critical of what she referred to as punitive laws introduced by Labor to crack down on protestors.

Larissa Waters stepped up for the final segment, and the focus shifted finally, to climate change.

“Were you disappointed that climate change was a very low issue in this campaign, and how do you propose to raise its profile?” This from veteran Brisbane Times reporter, Tony Moore.

Senator Water said that jobs can be created, and the climate crisis addressed, by building 100% publicly owned clean energy, by investing in schools and hospitals, and reviving the State’s manufacturing base.

“I think people understand that even though we’re in a global pandemic, and an inequality crisis, the climate crisis hasn’t gone away…”.

Asked how The Greens plan to do that with just two seats in the House, Ms Waters said:

“We are happy to be the ideas factory for the other parties. Often that’s what happens. We are very pleased if they want to adopt more of our policies, and get on board with what Queenslanders want: they want services, they want climate action, they want inequality addressed, and they want the big corporates to stop getting a free ride and pay their fair share.”

Finally, my question: I wanted to know what Senator Waters thought The Australian Greens would need to do to create an outcome similar to that in New Zealand, where the majority Labour Government has appointed the Leader of the Greens as its Minister for Climate Change.

“I’m hopeful that that will eventuate Federally. It takes two to tango though, doesn’t it? So, we will continue to campaign strongly for climate action, for action on equality, for publicly funded services. And, if the Federal Labor Party want to actually consider the fact that many of their voters support those ideas as well, then we would be very happy to have discussions about joint government in the future.”

Senator Waters said the Greens would have to gain more seats first and is hopeful they will have a second senator for Queensland in the next Federal Election and to win one, maybe even two, lower house seats.

“At that point, we can then start having those discussions in earnest.”

And with that, it was over.

Did I leave knowing anything more about Amy MacMahon or about The Greens strategy to influence Government? I’d have to say no.  The question is, will she take the opportunity in these early post-election days to let us get to know her, or will it be a slow reveal?

I am looking forward to a more personal and in-depth conversation with the new South Brisbane member in coming weeks.