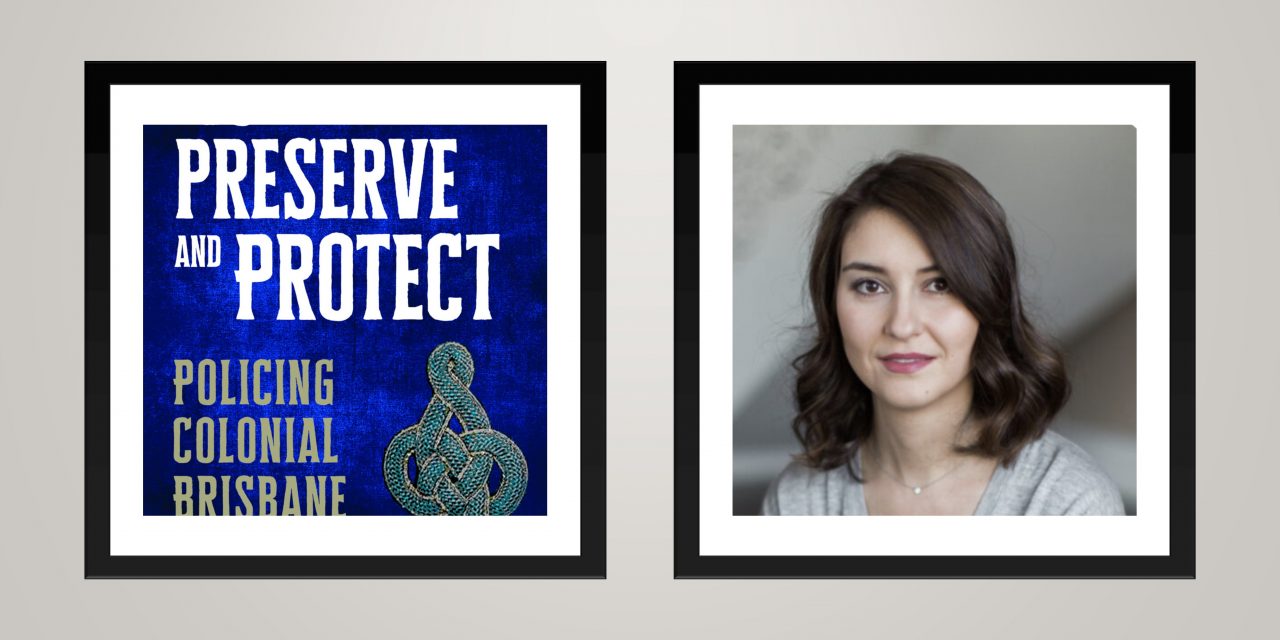 Dr Dukova’s doctoral thesis was a comparative study of the Dublin, London, and Brisbane police detailed in her book, A History of the Dublin Metropolitan Police and Its Colonial Legacy.[1] She found that early Australian policing had its roots on the streets of Dublin and London, and that is where many of Australia’s first law and order enforcers came from.

Her new book, To Preserve and Protect: Policing Colonial Brisbane[2], draws in part on her PhD research and was funded through the Lord Mayor’s Helen Taylor Award for History.

“I had an opportunity to expand and build on that [research] significantly, due to funding from Brisbane City Council.”

Each chapter of Dukova’s book focuses on a particular individual, and she explores the colonial experience through their lives. Two of her favourites are Peter ‘Duff’ Murphy and Susan McGowan.

Murphy was a lifer from Dublin sentenced to penal servitude for life. But he went on to become the first district constable of the Kangaroo Point. The chapter that focuses on his life story also explores the evolution of early colonial policing within Brisbane’s towns and town areas. 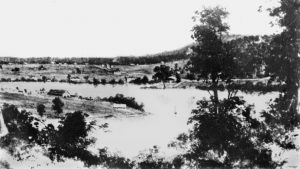 Murphy was from an impoverished area of Dublin and, after several run-ins with the Police, was indicted and convicted of street robbery in the Dublin City Court and sentenced for transportation to the Australian colonies for the period of his natural life in 1826. He arrived in Sydney in June 1827.

In 1838, he was assigned as a servant man to Patrick Leslie, a pioneer and a grazier who had arrived in Sydney from Scotland. Fourteen years after being sentenced in Dublin, Murphy was pardoned and himself made a District Constable. His diligent and zealous application to his duties saw him briefly act as a chief constable of Brisbane Police in 1850.

Susan McGowan was a ‘lady of negotiable affections’, and through her life Dukova explores the lives of other labouring class women in colonial times.

“A woman once fallen, it was deemed, cannot rise again.”

“I traced her life as I was writing this book and explored gendered justice and female criminality and it’s a good comparison for where we are today. We know that custodial numbers are driven by women who come from troubled lives, and it’s still very hard to break that cycle.”

Susan lived as a prostitute in Albert Street and died young. She is buried in Toowong cemetery in an unmarked grave.

“I actually went to try and find the grave to give myself a bit of closure, because I’ve been following her story since 2008, but unfortunately, it’s unmarked grave because she was buried as a pauper.”

“Why history is important, is that it allows us to see societal change, and the change of the organisations that are part of the society and shape it, and vice versa. So, as Queensland has changed throughout the 20th century, so did the Queensland police force.” 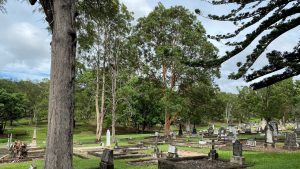 Policing is a social contract between the enforcers and the community. As Dr Dukova said in an interview with Lyndon Megarrity last year for Australian Policy and History.[3]

“The history of colonial era policing highlights the long and winding road to community acceptance and trust.  Although today the concept of Police is firmly and seemingly irreversibly integrated into the social fabric, its legitimacy is predicated on community trust.”

In the late 1980s, police corruption and abuse of power had so broken that social trust that the State ordered the Fitzgerald commission of inquiry.

Queensland separated from New South Wales in 1859 and established the Queensland Police Force in 1863.

Dr Dukova writes in her introduction:

“At this time, the settled area of the colony was divided into 17 districts, each with its own police force under a chief constable who took orders from the local magistrate. The magistrates performed a dual role as prosecutors and adjudicators, which left ample room for corruption and abuse of power. This corruption continued to be part of the local State and police governance for decades to come until it was exposed by the Fitzgerald Inquiry in 1988.”

Dr Dukova says that historically in Australia, there is a wave of change and progress, and then Queensland catches on. For example, South Australia and Western Australia enacted anti-discrimination laws in 1984, but Queensland did not have similar legislation until 1991.

“Then, as the wave of change came from society it overwhelmed the police as well.”

Now, she says, Queensland leads the country in some respects. It has, for example, the second female Commissioner of Police in Australia.

“In Queensland, of all places, that is pretty phenomenal, and the executive also has a significant female presence. A First Nations and Multicultural Affairs Unit has recently been created within the Cultural and Community Engagement group.”

That is evidence of the Service striving to represent the community and build relationships, Dr Dukova said.

The book is for anyone interested in Brisbane policing, Brisbane history and heritage, Dr Dukova says. While written with academic rigour, it is presented as an interesting read for anyone.

“It doesn’t require a specialist knowledge to appreciate what lived experiences were like in colonial Brisbane.”

In an otherwise very positive review of To Preserve and Protect, Michael Bennett’s one criticism is that Dr Dukova’s analysis of those who suffered at the hand of law enforcement would have benefited from an Aboriginal perspective.[4]

Dr Dukova says that is a fair comment, but there is a clear delineation between city policing and rural policing, and her expertise lies within the context of the city. She says that that Native Police or Mounted Aboriginal Police, for example, operated primarily outside of the city and were not within the scope of her research.

[1] A History of the Dublin Metropolitan Police and Its Colonial Legacy, Anastasia Dukova, Palgrave Macmillan UK, 2016

[3] To Preserve and Protect: Policing Colonial Brisbane: A Q & A with Anastasia Dukova, Australian Policy and History, 24 June 2020: https://aph.org.au/2020/06/to-preserve-and-protect-policing-colonial-brisbane-a-q-a-with-anastasia-dukova/. 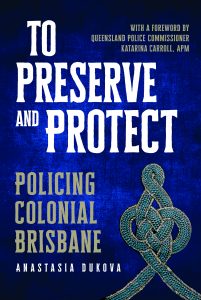