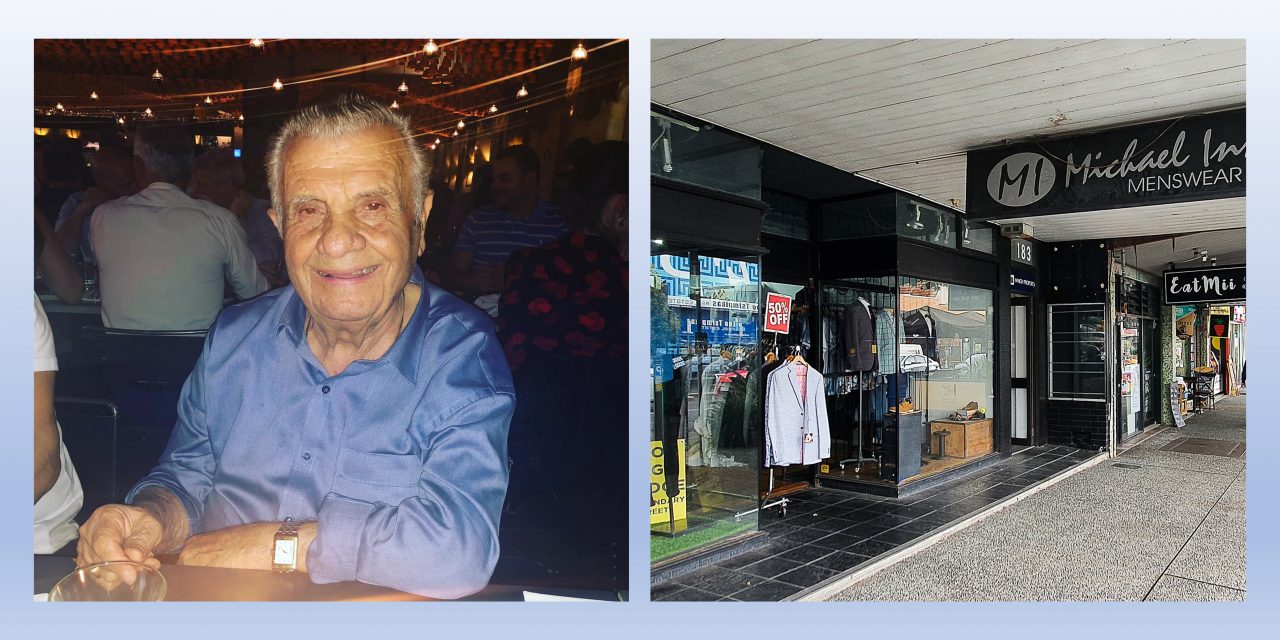 Michael Innis arrived in Australia from Greece in March 1947.

“I remember moving into a house in West End with many rooms and many people living in them.”

He and his family shared one room. The key was the sink in the corner; he had not seen anything as modern before.

“Friends and relatives invited us to stay,” he said.

It was relatively common for recent Greek migrants to stay with people from their village who were established in Brisbane.

Michael had learnt the skill and flair of being a tailor growing up on the island of Rhodes his home.  He was a skilled migrant which gave him access to work in Brisbane. In fact, just a few days following his arrival in Brisbane he says, “I started work with a tailor in Boundary Street, Mr Geronimos.”

There was great demand for skilled tailors. He worked with Mr Geronimos for around two years before he landed a job with city tailor, Rubens, a company that had three outlets in Brisbane city. The Ruben family were well known as quality tailors.

“I was very lucky, as I was able to work with a very skilled tailor at Rubens.” Mr Innes said.

He would follow the master cutter around daily learning the art.

“This man was one of the best cutters in Brisbane” he says, “as Rubens would have been in the top three suit makers at that time.”

He worked with the company for many years building a small financial nest egg prior to moving back into West End and setting up his own small business and renting with borrowed money. Located in Mollison Street in the future Gun Shop: a building that still stands.

Before long, the tailoring business became busy for Mr Innes. Locals in West End started to notice and the Greek community also started using him for their tailoring. Soon he was doing very long hours including weekends.

Michael bought his first shop after working in West End and the City for nine years. Located at 183 Boundary Street, it was a substantial wooden building of two storeys.

“Unfortunately, it caught fire one night, luckily not causing any harm to the tenants upstairs”.

He was legally able to rebuild on the site, which he did, following difficult negotiations with the City Council.

“I was fortunate because at that time being a tailor meant I got to know people who were in business in the city and other significant people in the community”.

“Everyone wore suits – it was a common way to dress”.

He rattles off a list of people too well known to mention.

“One of them was a gentleman who owned car-yards in Moorooka. He brought 56 suits to alter, all at once,” he remembers.

Many of the suits were originally tailored by Michael.  Illness had made the gentleman thinner.

Mr Innes was stunned but thrilled by his success. Soon everyone wanted his suits. Local politicians were no exception.

His early foray into real estate began via his local business contacts and social friendships. His work as a tailor meant he would hear about clients who were planning to sell or buy. They were happy to confide in him, keeping him informed.

Drakos Real Estate in Vulture Street were family friends, so he could introduce potential buyers to the agency.

“Sometimes I would be rewarded with a fiver [a five-pound note]. These rewards meant a lot to me”.

In the 1970s, as his family was growing up and his daughters were starting to help out in the tailoring shop, one of his daughters married a tailor, Michael Apolakiatis. The next step had been taken. His family started running the store “Michael Innis Menswear” a shop entirely dedicated to menswear.

With a lot of encouragement from friends it was the perfect opportunity for Michael to get his real estate licence and soon he was working in real estate for Drakos Real Estate.

“There was an exodus of Greek people from West End moving to the outer suburbs. Buying a house in areas like Carindale became a priority for some local Greek people,” he says.

“Some of them were afraid living in wooden houses, they caught fire easily they said, others went to where their relatives were”.

Ironically over the years some people who had moved to other suburbs decided that West End was really their home and decided to come back. Unfortunately, when they wanted to buy back, West End was much more expensive.

“People now needed a lot more to purchase and to do renovations to bring it back to a reasonable state.”

As a real estate agent Michael was again in the perfect situation: there was plenty of selling and buying going on. 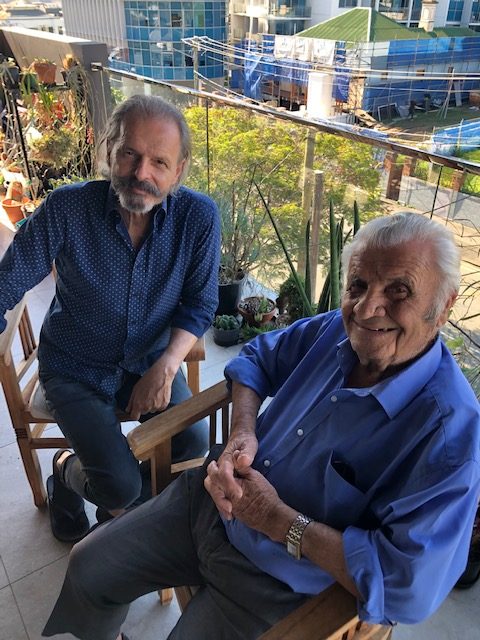 When clients dropped in for his real estate advice he would listen to their stories and in many cases advise them “not to sell”. They thought this a bit odd an agent advising them not to sell.

“Don’t sell in West End” became one of Michael’s mottos.

“I also felt that some houses in West End needed repair and in poor condition but still restorable.  I thought that West End was undervalued and would be for some time. Stick with the old stock, it’s close to the city. This was a place where you could invest and improve your wealth.”

“One of my best sales as an agent was to sell a string of houses to the same person, in a single deal.  12 houses next to each other in Grey Road,” he remembers.

Michael ‘s wife came from Sparta in Greece as young girl aged fourteen. Her father had moved to Australia a number of years prior to that. She arrived with her mother. She first came to Sydney and then moved to Brisbane where she met Michael. They married and had four children, all girls.

“My wife and I were very happy to have four girls and loved being cared for by lovely female children”.

Now he has a total of 22 grand and great-grandchildren.

Michael has always worked on the principle that one had to be generous and understanding to clients.

“Never cheat them,” he says ‘’the thief and liar is happy for some time, then there is destitution as people never talk to you or return for your services.”

He has been renting buildings in West End, often charging low rent, and making sure that people were accommodated reasonably.

To this day he is well known as a compassionate businessperson who never really saw instant money as a way to solve everything.

When asked about the current state of real estate in West End his comment was that “the buildings, that is tall buildings are very important and are good at housing lots of people as everybody wants to live close to the city. Who wants to drive a long way to get to work or get back home”.

“I have no issue with reasonable real estate development like in Europe, everyone can go shopping with their tiny little pushcart. It is all here.”

Michael is now in his 90s and still dishes out stories and advice. He is a happy humble man. His grandchildren visit frequently, and if they haven’t come over for a day or two, he gets concerned. He’s a caring grandfather. A large portion of his family lives in the local West End area in a family development enjoying each other’s company. He has distant family still on the island of Rhodes in Greece.

Michael Innis was the President of the Pan Rhodian Society of Queensland for over 30 years. Originally in Sussex Street West End, it was an organisation set up to support newly arrived migrants from the island of Rhodes. It was extremely popular organisation in its day holding functions, meetings and gatherings to keep the culture of Rhodes alive in Queensland. The Colossus Hall in Jane Street became the headquarters in later years.  Many people remember the location fondly.

The menswear store is now famously run by his granddaughters, with Kerry Constantinou and Renae Dardanis at the helm. One of his grandchildren is now in real estate. Unfortunately for him, starting a business with the Innis name proved to be a problem as he would get too many inquiries from people who just wanted Mr Michael Innis and no one else.

Michael is indeed one of our local legends.