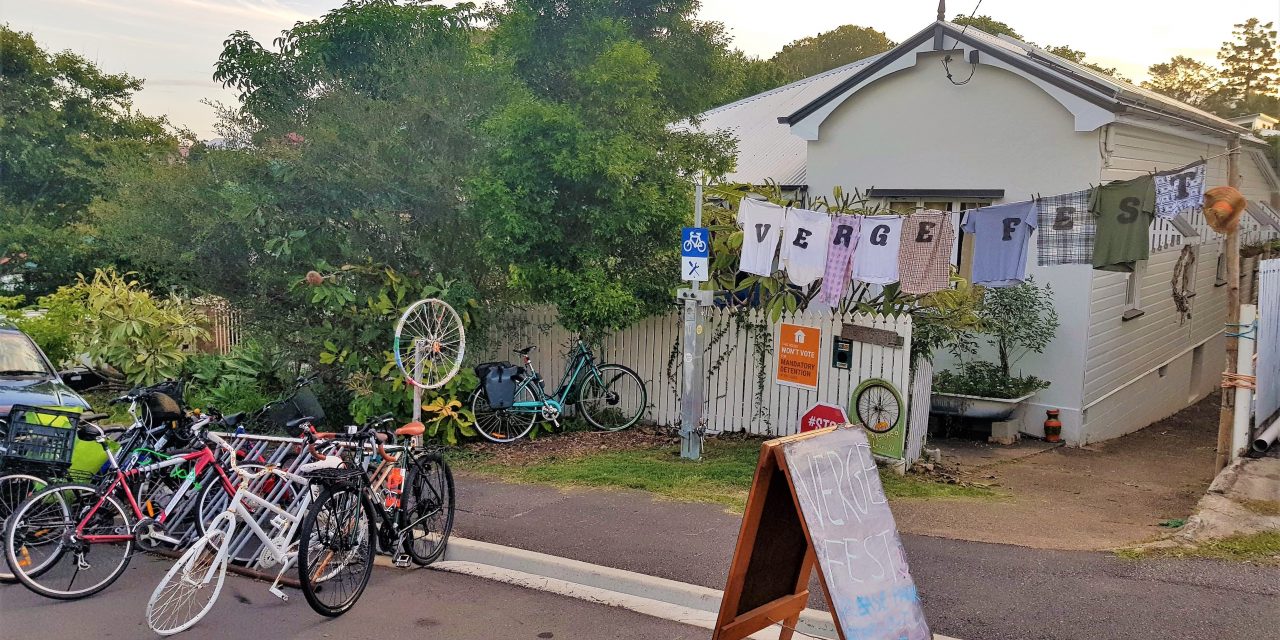 After 30 years as a share house, and half of those under the iconic name of ‘Turnstyle’, 10 Laura Street, Highgate Hill is coming to its end-of-lease, and the community has turned its attention to forging a path forward for this share house so the community hub to continue.

Turnstyle is a not for profit, collectively run community hub that has operated out of a residential Queenslander at 10 Laura Street, Highgate Hill, for nearly two decades. Residents of Turnstyle share the downstairs area of their home, providing a non-commercial space for community initiatives to grow. Over the years, Turnstyle has been home to countless community activities, including everything from band nights to dancing classes, workshops to film screenings, and much, much more.

Turnstyle is a free to use space by the community. Groups are asked to make a donation if they have the capacity, though Turnstyle remains one of the few spaces in Brisbane that the community can gather without a financial transaction. The activities at Turnstyle are supported by residents who live above, and oversee the management of the community space and members of the community who volunteer their time and effort in organising events. The relatively affordable rent of 10 Laura Street has enabled residents to create and develop this unique community space, though now the residence has reached its end-of-lease, Turnstyle is under threat.

While Turnstyle has hosted thousands of events over the years, it is perhaps most widely known for being home to the Turnstyle Community Bike Shed; hosting the Turnstyle Bulk Buyers food Cooperative, and being the ignition point for the Laura Street Community Festival.

The Turnstyle Bike Shed is run by bike enthusiast volunteers who teach cyclists how to repair, modify and build bicycles using tools we have purchased collectively from donations over the years. Like all Turnstyle activities, the Bike Shed is not-for-profit; one of the main drivers is to get as many bums on bikes as possible! Volunteers from the bike shed repair and build bikes from donations, and we sell them to the community at an affordable cost.

The Laura Street Festival is a wholly community-run and oriented festival brought back to life in 2021 by residents of Turnstyle (and much wider community support!). The festival is unique in that it is not commercial and all the performers, organisers and creatives who make the festival happen, do so for free. This year’s festival hosted more than 97 local bands, and workshops as residential properties along Laura Street turned their yards into ‘venues’ for the day.

One of Brisbane’s first and longest-running food cooperatives, Turnstyle Bulk Buyers, celebrated its tenth birthday this year. The bulk buying food cooperative has been the seed for many other cooperatives in surrounding areas. Driven by a community-centric approach to the food system, Turnstyle Bulk Buyers supports local, regenerative farms around Brisbane and is connected to a network of sustainable businesses within Brisbane.

Why does Turnstyle need saving?

The Turnstyle community has thrived in Highgate Hill thanks to having an affordable rental agreement with the owner of 10 Laura Street for two decades; now the time has come when the owner has decided to sell the property in early 2022. However, members of the community believe this unique share house and community space should continue.

What can you do?

At a community meeting in early November 2021, a number of community financing options were raised. We are now asking everyone with a connection to Turnstyle to fill out an Expression of Interest form to gather stories about Turnstyle and have their say in how Turnstyle should continue into the future.

Our next community consultation meeting about the future of Turnstyle is on Monday 6 December from 6.30 pm – 8.00 pm at Turnstyle. In a true Turnstyle tradition, the residents invite the community to join us before the meeting for a plant-based potluck dinner from 6.00 pm.

If you have any questions about Turnstyle, feel free to check out our website here, we update our calendar regularly with events that are open to the community. In addition, residents are happy to answer any questions you may have – email us at turnstylecommunity@gmail.com. We look forward to welcoming you into our community.