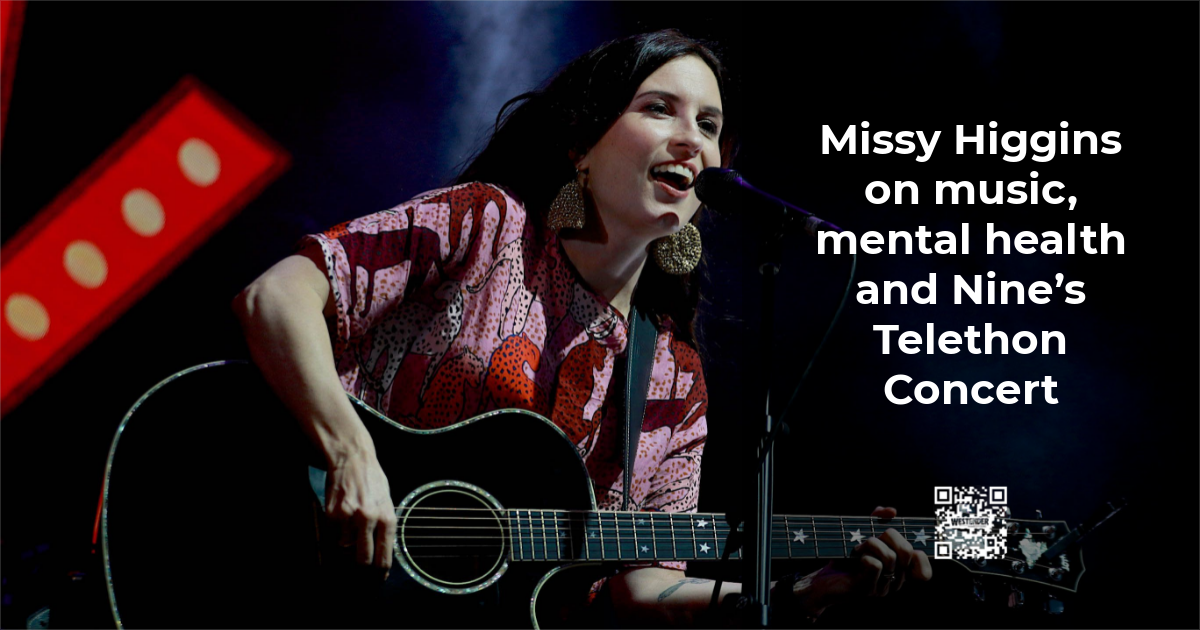 Featuring nine-time Aria Award winner Missy Higgins, the Channel Nine Telethon Concert in support of the Children’s Hospital Foundation will return on Saturday 23 April at Brisbane’s Fortitude Music Hall. After a postponement in 2021, the organisers intend to shatter fundraising records for sick kids and their families.

“We raised over $11 million for the Children’s Hospital Foundation at the 2020 Nine Telethon,” said Managing Director of Nine Queensland and Nine Northern NSW Kylie Blucher. “We cannot wait to bring everyone together for a fantastic and worthwhile event in 2022, where we’ll hopefully surpass our previous fundraising efforts.”

Missy Higgins spoke to the Westender about her music, her sense of self, and her involvement with the Children’s Hospital fundraiser. Over her career, Higgins has seen her music propagate like a living thing, spreading from the charts to car radios, fathers to sons, mothers to daughters.

“It’s pretty cool to know that the themes in my songs are universal enough to relate to people of different generations,” she said. “It’s really wonderful seeing the journey some of the songs have taken live over the years… older people grabbing each other and hugging, and these sorts of knowing looks between people of ‘oh my god, we listened to this when we were kids!’ so it’s pretty special to see the journey that the songs have taken in peoples’ lives.”

It hasn’t always been an easy ride for Higgins, who has struggled with her mental health and describes herself as somewhat of an introvert.

“It’s okay to be like that,” she said. “Most performers are, I think most people in the arts industry are [introverts] because that’s how we make good work. We think really heavily about everything.”

“For me, what’s always worked is vulnerability and honesty, because that’s just my thing. It’s always been the natural way I express myself, my songs have always been confessional in a way.”

Acutely aware of the seemingly incompatible relationship between introversion and a stage career, Higgins focuses on how performing can give her the power.

“There’s something about performing on stage that doesn’t sap my energy at all, it gives me energy. It makes me full of all the good things,” she said. “I think because I’m expressing myself and I’m in control, there’s not this kind of exchange going on where I’m doing anything I don’t want to do. It’s my show, I can say what I want to say and do what I want to do, and everyone has to shut up and listen!”

The confessional nature of her songs is her therapeutic outlet, and she’s a strong proponent for making music from a ‘selfish’ place, rather than pandering to the desires of critics and consumers.

“I’ve tried not to think about what people might like to hear or what might be successful because if you concentrate on that too much, you’re gonna make something that sounds really middle of the road and contrived,” she said. “Songwriting always needs to come from a selfish place, you have to do it for yourself and no-one else, and the rest will hopefully follow.”

There is nothing selfish about Missy Higgins, however. Frequently turning her talent to the service of social causes, she has spoken at length about mental health, environmental causes, feminism and more. It’s hard to think of a more fitting headliner for a Children’s Hospital Foundation fundraiser.

“I just always think that working in a children’s hospital must be the hardest job in the world, and the most rewarding. But it’s such an intense thing to take on, and I imagine one of my kids going through something where they need to go into hospital, and that’s my worst nightmare, and I can’t even begin to think how hard that would be on the parents to go through that,” she said.

“I thought it would be a lovely thing to do, to support them in any way I could.”

Higgins sees work like this as natural for those in the music and arts industries, but she doesn’t begrudge anyone who wants to “stay in their lane”.

“There’s a lot of musos who are very socially conscious. I guess when you’re an artist you usually wear your heart on your sleeve and feel things very strongly, and get probably more emotional than the normal person.”

The Channel Nine Telethon in support of the Children’s Hospital Foundation will take place on Saturday April 23 at the Fortitude Music Hall, with proceeds going toward sick children and their families.

“Come along! I think it’s going to be very fun. I’m looking forward to playing some songs from my new album [Total Control],” Higgins said. “I’ve got an album coming out March 4, and it’s a pretty kickass feminist album with a lot of stompy, clappy singalong numbers so I think it’s going to be fun. I’m also gonna be playing a lot of songs from my older albums and it’s gonna be just a fun family vibe!”