Electrified: The case for all-electric homes. 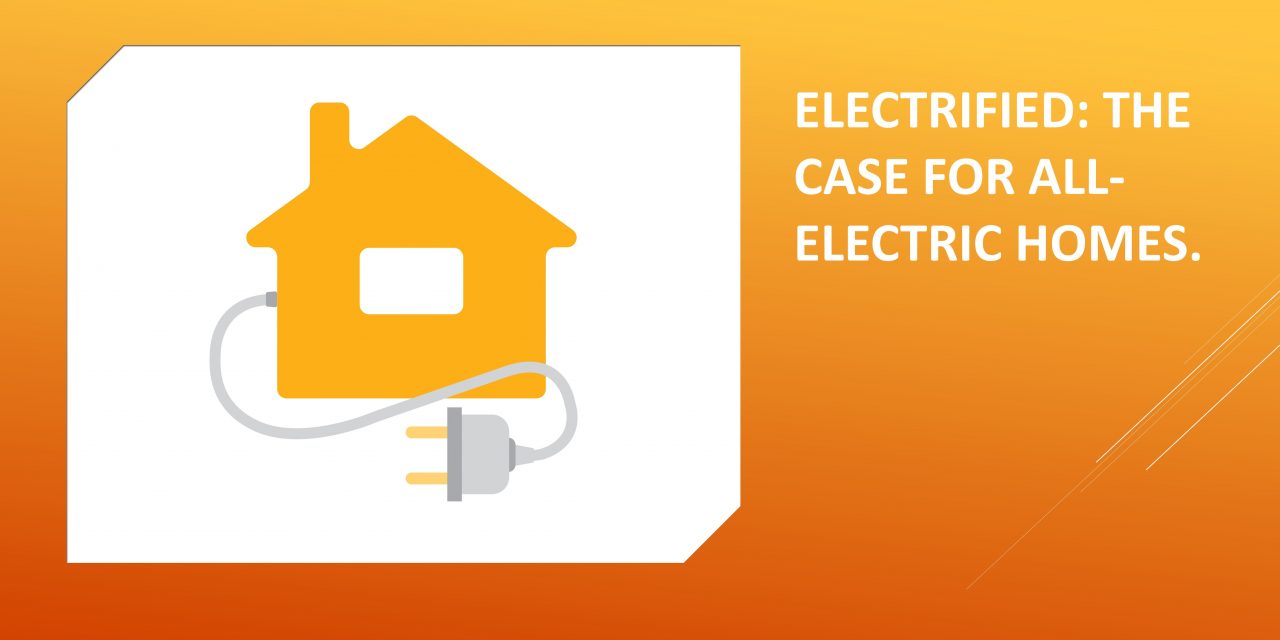 Climate journalist Bill McKibben (350.org fame) once wrote how “The first principle of fighting the climate crisis was simple: stop lighting coal, oil, gas, and trees on fire, as soon as possible”, and has followed up with a second, “…definitely don’t build anything new that connects to a flame.”

An all-electric home replaces any existing fossil fuel powered household appliances and services with electric versions. A good example is the gas hot water heater, which can be replaced by a super-efficient, electric hot water heat pump (more on these later). Fossil fuels like gas and petrol are expensive and highly polluting, releasing greenhouse gases such as carbon dioxide and methane into the atmosphere – not to mention into your home. Electrifying our homes has huge potential to reduce environmental harm, with Australian households responsible for at least 20 per cent of Australia’s greenhouse gas emissions. It is also cheaper, by electrifying everything we will reduce the cost of energy for nearly everyone, rich or poor. This fifth topic in a series of articles considering how better design and thoughtful public policy can help to improve the energy efficiency of my 1920s Queenslander home, will offer what I view as the most practical and achievable options to electrify your home.

The small-scale renewable energy scheme is a federally funded program incentivising individuals and businesses to install small-scale (less than 100kW) renewable energy systems, such as rooftop solar PV panels. The scheme offers up-front financial incentives based on the expected clean energy generation from the time of installation, to 2030. For homeowners, this rebate effectively lowers the up-front capital required to install renewable energy, an investment providing long-term savings on electricity bills and reducing the home’s reliance on non-renewable energy from the electricity grid. Less reliance on the grid is important since the electricity from rooftop solar is about five times cheaper than from the grid, and in many parts of Australia the grid is still dominated by non-renewable generation (although this is changing). The success of this program has made Australia the per-capita world leader when it comes to rooftop solar, with somewhere north of three million rooftop solar installations around the country. If your financial situation allows it, installing rooftop solar just makes so much sense. That being said, the average system costs approximately $4000, making this a significant investment.

Heat and cool your home and water with electricity

Wood heaters are a common way to heat our homes, although less so in the mild Brisbane climate. That being said, my house does have a relatively modern wood burning heater. Wood heaters certainly have charm, and they can look great in a home, but in my opinion these benefits do not outweigh the health risks of indoor and outdoor air pollution. Based on my research, we decided to have the wood heater removed. Wood burning heaters are also not very efficient, with a heating efficiency rating of 0.75 – meaning one unit of electricity is converted into 0.75 units of heat energy. For those of you with a gas heater, the number is 0.9. By comparison, reverse cycle air conditioners have a heating efficiency rating of 3.8, roughly five times better. In short, reverse cycle air conditioners are the cheapest and most efficient way to heat the home.

The hot water in my house is supplied by an instantaneous gas hot water system, via the mains natural gas connection. This is bolted on to the side of the house and looks at least ten years old. It’s at the point in the product life cycle where it might run for another ten years, or it might stop working tomorrow. When a gas hot water heater stops working, it can be simpler and quicker to replace it with a similar system. And this is what most of us do – I know I have in the past. We want a hot shower or bath, and we don’t have time to consider a different technology like a hot water heat pump. But these decisions are important, water heating is the second largest energy use of appliances in an average home.

So, what exactly is a hot water heat pump? It works similar to a reverse-cycle air-conditioner when run on a heating cycle, instead using electricity to extract heat from the air and heat a storage tank full of water. Hot water heat pumps are expensive to purchase (~$5000) but cheap to run, using about 30 per cent of the energy of a conventional electric hot water system. If you have rooftop solar, installing a hot water heat pump makes even more sense. Water heating can be timed to coordinate with the optimal solar generation output of the rooftop solar system, with the storage tank storing the hot water for on demand use throughout the day and night. Hot water heap pumps are also eligible for rebates under the small-scale renewable energy scheme, the successful federally-funded incentive to install renewable energy systems.

Disconnect from the gas network

Now that I have decided to heat my home and water with electricity, the only remaining connection I have to expensive and polluting fuels is the cooktop. Replacing the existing gas cooktop with an electric model means the mains gas connection can be disconnected. This removes our reliance on non-renewable energy and gets rid of the on-going fixed costs of maintaining a mains gas connection. Using the same ratio comparison as I did for space heating, electric cooktops have a heating efficiency rating of 0.7, compared to a gas cooktop’s rating of 0.3, making them more than twice as energy efficient. There is also a lot of research highlighting the health risks of burning gas indoors, with the nitrous oxides and fine particulate matter released during cooking potentially creating respiratory issues. Even worse, methane can leak from gas burners even when they are not being used. I understand the connection we have to cooking over a flame, I really do get it, but I also think it’s time we moved past it – particularly when we now understand the risks.

Think about your transportation options

It would be remiss of me not to briefly mention the potential of the electric vehicle (EV). Vehicle fuel use currently accounts for 69 per cent of a household’s total energy use. As it stands, the price of an EV is still far more than a comparable petrol or diesel model. This will change, and quickly, with many analysts expecting price parity by 2027. Apart from the lower costs and a reduction in noise and air pollution, there are other benefits to owning an EV. Because they are basically a battery on wheels, the EV can be used to store surplus electricity from a home’s rooftop solar system, to be used (or traded back to the grid) when the sun goes down or when it is cloudy outside. This requires vehicle-to-grid technology, with many trial sites around Australia looking at how to best integrate this into our electricity system.

Electrifying everything is transformative, and we have all the technology we need to make it happen. Replacing fossil fuel powered appliances with electric versions will clean up our homes and reduce our energy bills. If we rolled out all available technologies across Australia, energy use per Australian household could be halved by 2030. Our electricity grid is relying more and more on renewable energy, meaning even if you don’t have rooftop solar you can be confident that your decisions are helping to reduce carbon emissions.

So let’s get on with it.