We All Have Some Connection To War 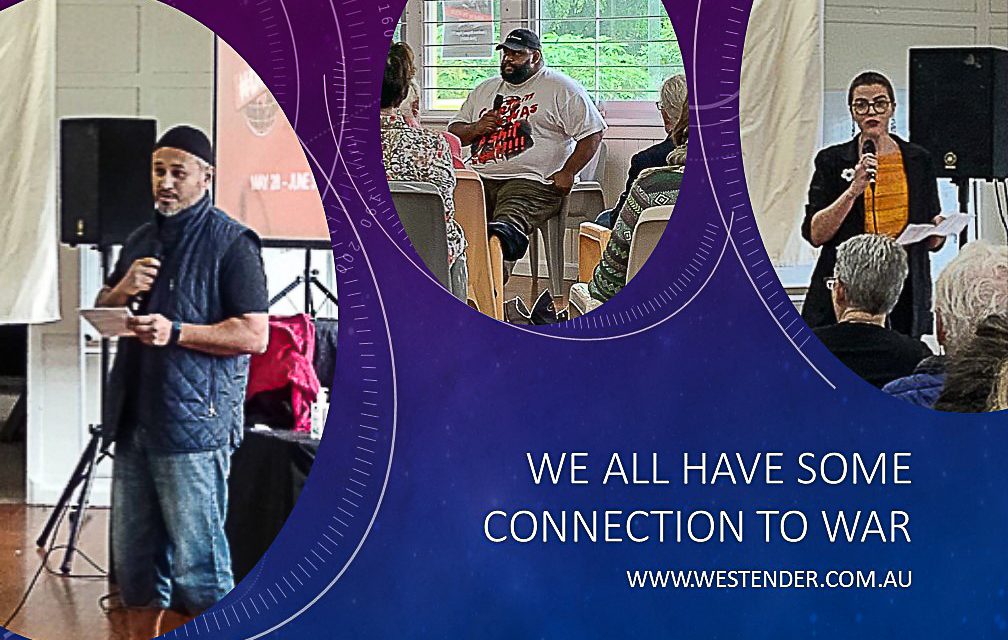 At the Disrupt Land Forces meeting on Saturday 2 May, organiser Margaret Pestorius said she wanted to find people with direct experience of war who could speak at the meeting and wondered where she might find them; she discovered “they live among us”.

The meeting was held to inform and organise action against the weapons expo being held at the Brisbane Convention Centre from 1-3 June.

Ratz Velasco was born during the war in El Salvador. She became emotional and struggled to speak as she described growing up in an environment where when a family member left home she couldn’t be sure they would return. Ratz said she risked stepping on a landmine on the way to school and worried her brother would be killed or kidnapped and forced to join the military, or that her sister would be taken from university and raped. When she was 13 her father decided to take the family and flee to safety. They arrived in Australia where they were safer but were then subjected to racism.

Nathalie Farrah was 14 and out on a second date with her boyfriend on Valentine’s Day 2012 in Damascus, when they heard screaming. The Syrian rebel forces had been bombing the outskirts of Damascus trying to work their way into the centre and as Nathalie and her boyfriend rounded a corner they came face to face with the military. They ran for their lives, knocking on every door they came to until an elderly lady took them in. Like Ratz’s father, Nathalie’s also decided to take his family and flee the violence.

When Caroline Dimara was a baby, her parents left her and her siblings with their grandparents while they left West Papua to find a safer place for their family. Her father was part of the resistance movement and knew he would be killed sooner or later. Her parents canoed by sea across the border into Papua New Guinea where they found a refugee settlement to which they brought their children. Caroline said there was no school and no jobs for the refugees and her mother sold corn in the market to try to make some money to feed the family. Her father arrived in Australia in 2000 and spent time in Baxter detention centre before settling here with the family.

Aunty Karen Coghill of the Jagera people opened the meeting with a welcome to country and spoke about the history of her people since first contact with Europeans, when John Oxley came searching for escaped convicts who had been shipwrecked on Stradbroke Island.

Boe Spearim, who hosts the Frontier Wars podcast, and who wore a T-shirt with “Captain Cook was a sh*t c*nt” emblazoned across a picture of Cook, spoke about the use of military and police violence against the Aboriginal people.

Boe said the Aboriginal people did as much as possible to avoid conflict, but as the white men began encroaching on their land and killing and raping their women they had no alternative but to fight back. He said traditionally, when Aboriginal people had needed to settle a dispute, they had designated areas where they fought, but the white men would fight them wherever they found them. Boe said the Native Mounted Police was formed by the colonising government to carry out violence against their own people and operated for 50 years in Queensland. Their title was changed to “trackers” helping the police move Aboriginal people off their land, take their children, and massacre them in their hundreds of thousands. He said it is the reason so many Aboriginal people have a distrust of the police, police who are always armed.

Zelda Grimshaw from Wage Peace is one of the organisers of the action against the Land Forces Expo. She said “where you find famine and where you find refugees there is war”, that in war, fields are bombed and forests are burned, starving and displacing the people who rely on these environments. “One of the problems with the Frontier Wars is that they’re not over,” she said, adding, “80% of the Earth’s wild places are being defended by 3% of humans,” and that they are struggling against militarism whether because of war or violence being used to take land for mining. Zelda claimed many of the companies exhibiting at the expo supply weapons to Indonesia who then use them on the West Papuan people. She said the Indonesian government has justified the use of violence against the West Papuan resistance by declaring them a terrorist organisation.

Zelda said the aim of Disrupt Land Forces was to make it “uncomfortable” and “unattractive” for the government to hold weapons expos and that similar actions in other countries have been successful in achieving this. Their plan is to use non-violent direct action in whatever form that takes, to use “sound, sight, smell, movement and music” to bring attention and disrupt, and show projections of art and play recordings of the voices of those directly affected by war. Zelda said the long term goal is to “develop a broad-based campaign for disarmament”.

Binil Kattiparambil from the Islamic Council of Queensland spoke about how the term “refugee” has developed negative connotations and that it took the death of three-year-old Syrian boy Alan Kurdi, washed ashore in Turkey, for the world to see them as human beings; but even that has now been forgotten. He said there are now 98.5 million people displaced around the world due to war. He offered a quote from his tradition:

Binil said that during Ramadan they are praying each evening that “this nation becomes a nation that puts people before profit”.

State Member for South Brisbane, Amy MacMahon, spoke about how public money is being used to hold the weapons expo and how such events “are designed to pressure governments into spending more money on militarisation”. She said Rheinmetall, one of the weapons manufacturers exhibiting at the expo, is hosting a private dinner for those invited to the expo. Ms MacMahon claims the Australian Government’s aim is to make Australia one of the top 10 arms dealers in the world[i], and that the money invested could be better spent on investment in renewable energy, public housing, and education. She said there is a “continuum from weapons manufacture to gun control” citing Bob Katter’s son-in-law, Robert Nioa, who owns local weapons manufacturing company Nioa, (and who has donated almost $600,000 over four years to the KAP and the LNP) is active in the gun lobby. Ms MacMahon said, “There is a direct line between what will be happening [at the Expo] and what’s happening in the rest of the world.”

In her closing speech Margaret Pestorius encouraged those present to go home that evening and share the stories of their own families’ connections to war.

“We all have some connection to war. There are a number of points where war has shaped you as a person.”

[i] Australia unveils plan to become one of world’s top 10 arms exporters https://www.theguardian.com/world/2018/jan/28/australia-unveils-plan-to-become-one-of-worlds-top-10-arms-exporters