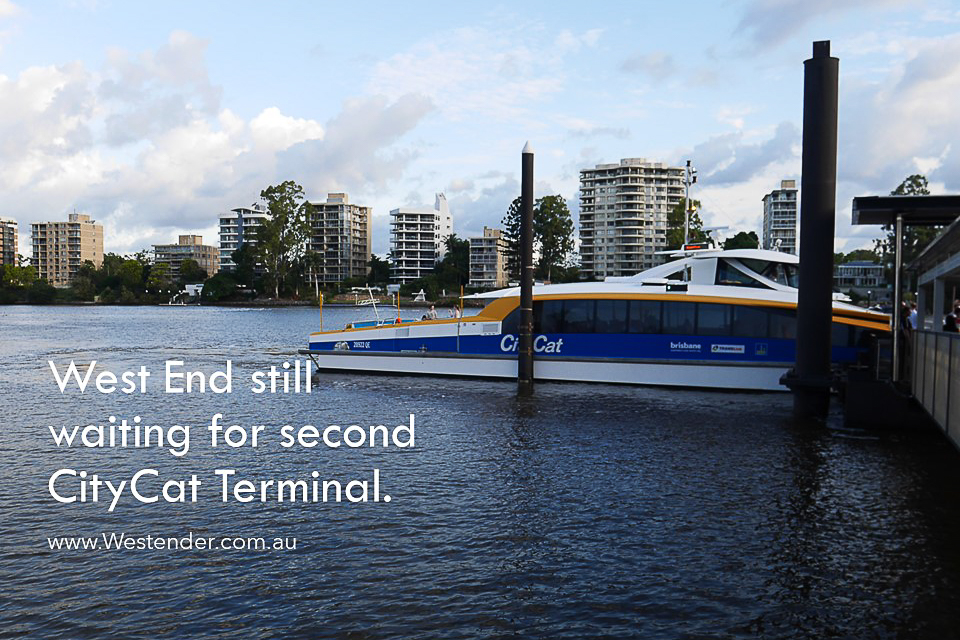 In 2015, the Courier Mail reported that then Gabba Ward Councillor, Helen Abrahams, ‘implored’ Lord Mayor Graham Quirk to set aside a portion of the Brisbane City Council budget to establish a new ferry stop in West End.

“Every land plan put out … including the South Brisbane Riverside Neighbourhood Plan … always shaped a CityCat terminal at the end of Victoria St,” Ms Abrahams is quoted as saying.

At the time, Ms Abrahams said that in around 2011, Council had gone so far as to call for tenders to build the terminal, but that the project did not proceed.

The community has continued to put its case for a second ferry terminal in West End.

In 2016, Nicole Lessio, a previous Labor candidate for The Gabba Ward, submitted a petition to Council for a new ferry terminal at Victoria Street. This was rejected, though in its response, Council said it would, “consider the location as part of any future expansion of the CityCat, CityFerry and CityHopper network.”

And just last week, after considering a petition signed by over 700 residents, the Public and Active Transport Committee made a recommendation to Council to turn down the requested CityCat terminal.

In a statement provided by Council, the decision not to provide a new terminal at this time was justified because, in its judgment, West End is already well serviced by public transport:

“A CityCat terminal currently exists at Orleigh Park, West End. The site at Victoria Street will remain preserved as a future location of a terminal.

“Council’s high-frequency Blue CityGlider already services this area with services every five minutes in peak and 24 hours on Friday and Saturday.

“Further, Council is working to deliver two green bridges in West End, which will connect the area to Toowong and St Lucia.”

Cr Jonathan Sri, like his predecessor, has long been a proponent of a second CityCat terminal in West End. He has rejected arguments put by the Committee that existing services with the proposed new green bridges to West End will fulfill the peninsula’s public transport needs.

“Recent and anticipated population growth for the western side of the Kurilpa Peninsula (particularly along Montague Rd) means that new high-capacity public transport services will be needed to move people in and out of West End,” Cr Sri said.

At the Council’s general meeting on 19 May 2020 Cr Murphy said in respect to the decision:

“… we haven’t ruled out building an additional CityCat and CityFerry terminal at West End. We haven’t done that at all. It is part of our long-term neighbourhood plan for the area and it’s something that I think all Councillors would agree we would like to deliver in the future.”

The Westender asked for a comment from Cr Murphy on what he means by “in the future”, i.e., what needs to change in terms of demographics or any other factors that would make a new CityCat terminal a reality for West End?

“Council will continue to monitor all new developments in the area and liaise with Translink on the need for further public transport options,” Council said in a prepared statement.”

C Sri said, “The words ‘long-term’ don’t give me much confidence”.

“At some point, Council will have no choice but to provide improved public transport infrastructure for 4101 because of the sheer volume of people moving in and out of the area. This isn’t just about catering to local residents – it’s about the thousands of people who travel into South Brisbane and West End for work each day.”

“4101 needs both a new footbridge to Toowong and a new CityCat terminal for the western side of the peninsula. They fill different roles in the transport network and are not mutually exclusive – both are necessary.”

“The fact that other parts of the city are also under-served in terms of public transport options is not a legitimate justification for further delays to delivering the CityCat terminal. Instead, it highlights the broader citywide problem that there simply isn’t enough money coming into council’s coffers to cover the costs of all the essential transport infrastructure, parks, community facilities and drainage work that our growing city needs.”

President of the West End Community Association, Seleneah More said that the Association supports a CityCat terminal as another option to meet the active transport needs of the growing population.

“Given we have been waiting over a decade since the city cat was included in the South Brisbane Riverside Neighbourhood Plan, the terminal location must consider the volume and concentration of residents and the possibility of Green Bridge landings as new variables,” Ms More said.

Ms More says that there needs to be reform of State Government legislation for developer infrastructure contributions to ensure they are spent in proximity to the development that created the demand.

Referring to the recent consultation process for green bridges, community group Kurilpa Futures said it is concerned that the engagement process did not ask people if they preferred alternatives to the bridges, for example, new or more frequent ferry services.

“In that sense the consultation was deemed a ‘post decision’ consultation. This makes the recent decision to exclude a new ferry terminal even more unacceptable. A cost-benefit analysis should have been conducted on all alternatives,” said Pam Bourke of Kurilpa Futures.

The Group said Council’s decision is very disappointing, noting that a second ferry terminal would service a long stretch of the river from the University to the city as well as the western side of West End. They also consider that the green bridges engagement process indicates that there is some support for better ferry services.

Ms Bourke of Kurilpa Futures said, “There is no evidence base for the decision. Saying West End has better public transport than elsewhere in Brisbane completely ignores the massive and rapid population increase on the Kurilpa peninsula that justifies the additional service delivery. No other post code in Brisbane has come close to the increased population density. The Kurilpa peninsula is shouldering the lion’s share of the SEQ population targets for the whole city and there should be a nexus between development and the timely provision of infrastructure and services.”

“Council should as a priority release an infrastructure schedule for the Kurilpa peninsula that details what has been collected and how the funds are allocated between different projects,” Ms Bourke said.

In similar vein to the West End Community Association, Kurilpa Futures also said that there continues to be insufficient transparency around the amount and use of infrastructure charges levied in the postcode.

Cr Sri told the Westender that he intends to keep pushing for a new CityCat terminal for the western side of West End.

“…but I think we also need to remain open to other high-capacity public transport options. It’s not entirely out of the question to one day extend the Brisbane Metro down Montague Road, but that would involve a major redesign of the whole corridor,” Cr Sri said.