What will the big swing to Jonathan Sri mean for The Gabba? 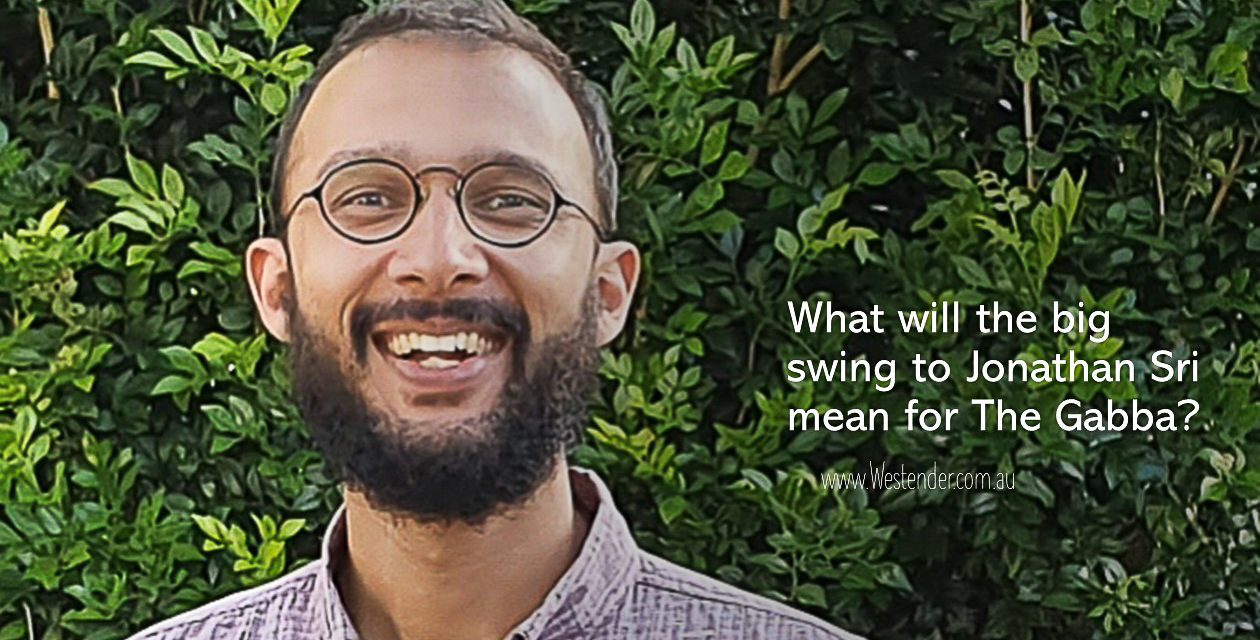 Its nearly three weeks since the Brisbane City Council election on 28 March, but the Electoral Commission of Queensland (ECQ) is yet to complete counting.

There is no doubt however about the outcome, with Councillors declared for all but five of the 26 Wards, the ABC’s Antony Green has given 19 Wards to the LNP, five to Labor, one to The Greens and one Independent.

With a swing of 5.3% to The Greens, and a whopping 45% of the first preference vote, it was clear very early on that Jonathan Sri had secured The Gabba for a second term. His critics can no longer claim that Jonathan Sri’s win in 2016 was a fluke, nor that his policies are fringe or radical[1].

Given Brisbane voters have essentially returned us the same council we had before the election, I asked Cr Sri what the big swing to him in The Gabba means in terms of his capacity to influence the Schrinner regime on behalf of Gabba voters?

Cr Sri thinks that the strong swing to The Greens in The Gabba will give him a much stronger mandate than he had in the previous term but says his capacity to influence Council will still depend on each issue and portfolio.

“There are some issues where the key obstacle to getting a certain outcome is that they [the LNP] believe there is not popular support for a particular change.”

“A good example might be taking cars off the northern end of Riverside Drive. In the past, I’ve asked for that to happen and the response from Council has been, ‘we not sure that everyone supports that’ ”

Cr Sri thinks that issues such as The Green’s proposed Vacancy Levy, while popular with voters, is also something the LNP is likely to be more ideologically resistant to.

“But generally speaking, even though we haven’t won balance of power, simply getting a strong swing is a big endorsement of the platform,” Cr Sri said.

Cr Sri says that one advantage is that The Greens took a very clear platform to the election.

“Our mandate is stronger because we made very clear election campaign commitments. If we got a strong swing but had been a little bit vague in terms of what we were calling for, then it might be a bit harder to prosecute the case for some of the changes we’re advocating”.

Cr Sri said that almost one in five residents right across the city voted for The Greens.

“That shift in terms of the city-wide swing towards The Greens is going to have to influence what issues [the LNP] will prioritise and where they direct funding for some of their bigger projects. And hopefully, that puts to bed some of the detractors.”

Why were The Greens able to reach progressive voters in the inner city, where Labor fared less well?

Progressive voters are increasingly concerned about the health of democracy as a whole, Cr Sri told me.

“They feel frustrated that all establishment political parties are to some extent getting co-opted by big business influence over political decision making”.

“What ultimately cuts through for The Greens is that we were acknowledging the broader problems with a dysfunctional political system and offering solutions such as community voting and banning corporate donations”.

Cr Sri said that Labor was tapping into some of the frustrations about political corruption and fraud, but he said they were trying to blame the LNP rather than defining the problems in more systemic terms.

“I think a lot of engaged voters can see that while the LNP definitely has had its problems, a lot of the problems with our political system are bigger than any one party”.

Priorities for The Gabba

Before the election Cr Sri outlined for The Westender a number of priorities for his second term from making public transport cheaper to supporting more arts hubs and music venues.

“Pedestrian safety and supporting public and active transport will be the areas where I can find most common ground with the Council administration, because those sorts of changes don’t cost as much and don’t necessarily threaten the property industry’s profits directly,” Cr Sri said.

Cr Sri thinks he will be able to win Council support for ideas like planting more street trees, verge gardens, and community gardens.

“That will continue to be a big part of what I’m advocating for,” he said.

Cr Sri considers that the foot bridges to West End now have support across the political spectrum.

In a piece published this week on his website[2] Cr Sri said he thinks the election result indicates that voters prefer candidates who take definitive positions on issues. He compared his own position on the West End to Toowong Green Bridge with Labor’s Rachel Gallagher. Where he made a fairly definitive statement of support, Ms Gallagher said she would prefer further investigation.

Cr Sri said that there will definitely be a feasibility study and a business case about the bridges before they proceed with the project anyway.

“I think the broader question of how you balance competing needs and views is that we need a strong commitment to participatory democracy and deliberative decision making”.

Cr Sri says that it’s inevitable that some people will not be happy with all decisions, but participatory democracy processes in which people can trust that the process will have identified the key issues of concern can go some way to ensuring that the minority doesn’t feel completely disenfranchised.

“I am learning as a Councillor, that even when you have a really good consultation and decision making process, and I don’t think Brisbane City Council does do that, but even if you have a sort of best practice approach to community consultation and participatory decision making, there are still going to be people who are unhappy with the results. And that’s just part of living in a community”.

Cr Sri thinks that some issues, like pushing for Council to acquire more private land for public green space, will require stronger community campaigns across the whole community.

“It won’t happen without strong advocacy”.

“I think we need a stronger commitment to solidarity and coalition building. And I think we saw that a little bit with the Mount Coot-tha Zipline campaign, where residents from across Brisbane took an interest in that issue and advocated collectively”.

“Rather than pretending that different residents’ groups and everyone in different parts of the city will have 100% the same interests, it’s just about making sure that where there is a particular issue that speaks to a broader systemic problem, that community groups practice solidarity”.

Cr Sri says its unfortunate that a term such as ‘solidarity’ is out of vogue, particularly in conversations about urban planning and sustainable development campaigns.

“But what it really requires is those community groups and the communities that have the biggest capacity, rolling in behind and supporting communities in other geographic areas that have less organising capacity”.

Cr Sri says that historically West End has probably had more community organising capacity and much more engagement with urban planning issues than other parts of the city.

“So maybe the first step in building those coalitions is for Westenders to get out of the Peninsula and support some of those campaigns in other areas. And hopefully, as those relationships build, they will return the favour”.

Cr Sri says that while it is much harder to get people to mobilise around a single local development in a certain suburb, he thinks that the vacancy levy might be one issue that could be campaigned for across the city.

“The issue of vacant shops and vacant homes is definitely a citywide problem. And I think there’d be community groups across the city that would be more supportive of something like that.”

How do you judge your own performance?

Voters get to judge the performance of Councillors at the ballot box, but I asked Cr Sri how he judges his own performance.

Cr Sri said that Councillors do not have a clearly defined job description, and as a result, everyone has slightly different expectations of what they are supposed to focus on, and that can be a tricky balance to navigate, he said.

“I judge my own performance partly on my ability to shift the parameters of acceptable debate. I look at the issues that were considered fringe issues or very unlikely, four or five years ago, such as rental law reform, where when I started talking about it, it wasn’t really on many people’s radar, whereas now, it’s definitely shaping up to be a key issue in the coming state election.

Cr Sri said he also judges his performance on tangible outcomes such as new pedestrian crossings and park upgrades.

“And partly I judge my performance on the welfare of the community as a whole – so if the community is struggling, I think that also to some extent, reflects on me and my representation”.

The State Election in October

Cr Sri reiterated his previous comments to The Westender that he will not be standing for South Brisbane in the State Election.

“… personally, my commitment is definitely more towards bottom up social change. I’m not as excited about hierarchical centralised government.”

He said that The Greens will announce their South Brisbane candidate for the State Election in the next few weeks. He thinks they have a strong candidate, but wasn’t throwing out any hints.

Cr Sri thinks the issues for swinging voters at the local level, such as over development, are different to the issues that will be influential at the State Election, but considers that overlapping issues such as public transport and political corruption will definitely be in play.

“The State Labor Government is on the nose a little bit because of their projects like the Queens Wharf mega casino, and I definitely think that’s going to have an impact,” he said.

Cr Sri also thinks that in the inner south, a key local issue at the State Election will be renters’ right, an issue he said, that Labor promised to fix as part of its 2017 election campaign.

“I don’t think any of the political parties have fully grasped how being in a precarious housing situation, can very quickly politicise someone and change their political allegiances. Bad public transport networks probably aren’t going to catalyse a revolution in Brisbane, whereas a lot of people are really frustrated about renters’ rights, and I think there are a lot of Labor voters in particular, who are frustrated that Labor hasn’t done more at the State level. I think that’s going to play out in the state election in a way that people haven’t quite recognised yet”.

And to his own political future, Cr Sri has not ruled out running for Mayor at some stage, but adds, “…who knows what the politician situation will look like in four years time”.

[1] Cr Sri was penalised by Council just today (17 April 2020) for comments and actions in respect to the Police and Extinction rebellion in October 2019. See his response HERE

Next week The Westender will talk with Cr Sri about the impact of the coronavirus pandemic on the election results, on Council’s role and response to the virus, and in particular on the role of Councillors at this time.