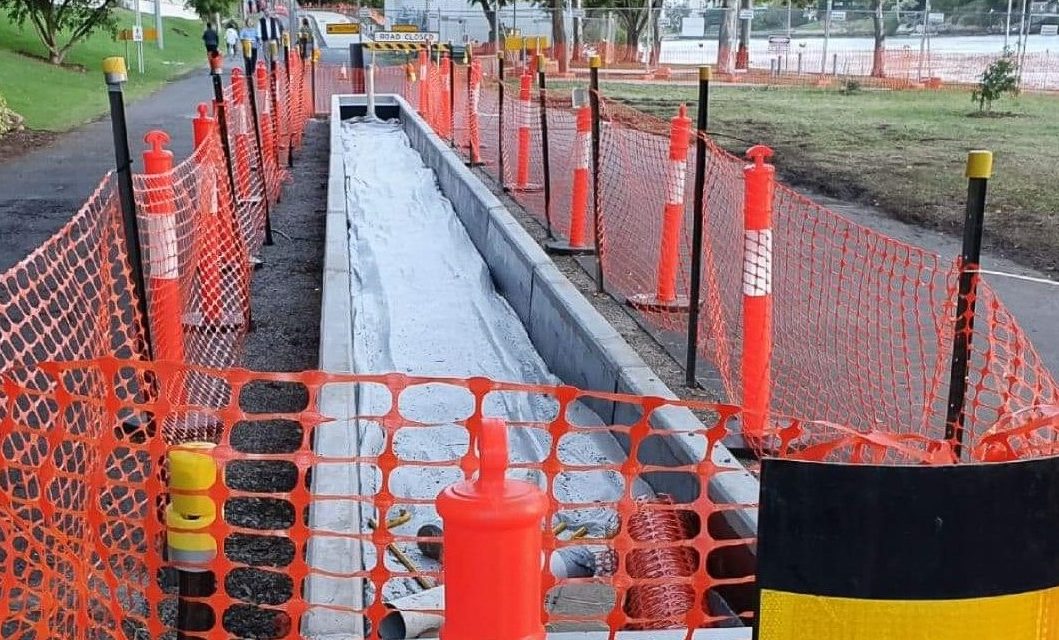 Many will have noticed the public works on Riverside Drive to create separate walking and cycling lanes. The Gabba Ward Councillor, Jonathan Sri answers questions about the works below:

Q. Riverside Drive is quite wide and many feel it was very adequate as it was to safely accommodate cyclists and pedestrians. How was the decision arrived at to create separated cycle and pedestrian lanes, ie. was there a consultation process and if so who was consulted?

A. This project came about because I was advocating for more spending on park improvements around West End. Council allocated $2 million in the budget for Riverside Drive last year but the budget allocation didn’t specify what to spend it on. I suggested some of the money should be used to convert bitumen to green space at the southern end of Riverside Drive, and I was pleased the LNP agreed to that. The administration declined my requests to run a formal public consultation process on the project because they said their options were pretty limited and there wasn’t really that much to consult on, but they said they were consulting with the body corporates of nearby apartments. They advised me of the plans to partially separate the bike and pedestrian tracks and these were published online, but there wasn’t much meaningful consultation with the wider public. The broader problem here is that we don’t have a current holistic masterplan for Riverside Drive to guide future improvements. It would be better to run a wide-ranging and inclusive participatory design process to develop a masterplan for the whole parkland that has broad community support, rather than making ad hoc decisions.

Q. Have there been any reports of accidents or incidents occurring between cyclists and walkers ?

A. I’m not aware of any serious accidents, but we do get reports from time to time of near misses and complaints that a minority of fast-moving cyclists are not doing a good job of respectfully sharing the road with pedestrians.

Q. Was the Queensland Walks groups consulted, or was the consultation primarily with cycling groups?

Q. The works appear to commence at Forbes Street and move towards the city. How far will the separated lanes extend?

A. The project extends as far as Victoria St, but there are only a few sections with hard physical barriers between the footpath and bike path. In some sections, the two paths are separated by raised garden beds and seating, while in other areas the paths are only distinguished by painted line markings. Personally I think this strikes a good balance because it means there’s enough clear delineation to encourage pedestrians to avoid the path of commuter cyclists and vice versa, while still allowing a bit of flexibility and free-flowing movement of different path users (e.g. smaller kids on bikes who might prefer to ride in the pedestrian pathway).

Q. Who prepared the design?

A. Landscape architects and parks planners within council, working in partnership with other council departments such as the active transport, storm-water management and engineering teams.

Q. Was it based on evidence of best-practice from similar sites or cities?

A. Generally speaking there’s growing acceptance that on busy cycling corridors, it’s better to have some form of separation between pedestrian and bike paths, because fast-moving commuter cyclists or sports cyclists use pathways quite differently to people who might be going for a leisurely walk or even a slow recreational ride. If you spend a bit of time on the South Bank riverfront, you’ll see that when pedestrians, bikes and escooters share a path that’s not clearly delineated, there are a lot of near misses and minor accidents.

Q. Is there a plan or are there drawings that you can share with the community?

A. I have asked for a copy of the detailed designs so I can share these with the community, but the administration has refused. They have brought the detailed designs to show me at a meeting, but refused to leave me a copy. The only plans we have access to are the same ones that have been published online and in the council newsletter. I could put in a formal Request for Information to get the detailed plans, but that’s a time-consuming process that would mean I have less time to advocate on other issues (e.g. over-development). 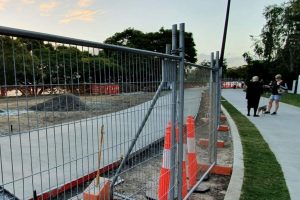 Q. What is the cost of this exercise to rate payers?

A. The total budget (including design work etc) is around $2 million, but council hasn’t published a clear breakdown of the different components of the project.

Q. Some of the work appears to have encroached into the parkland. Is this the case, and if so, will the loss of green-space be off-set in some way?

A. While the path alignments have changed a little bit, overall this project is significantly increasing the amount of useable green space, mainly at the southern end where around 500m2 of bitumen is being restored as green space.

Q. What side of the track will be dedicated to which mode of transport, and how was that decided?

A. The side closest to the river is for pedestrians. I understand the main justification for this was so that pedestrians can flow freely between the pathway and the adjoining green space and river. I think that’s preferable to having a situation where pedestrians who are walking along the path are cut off from the river by bike lanes.

Q. There appear to large concrete trough-like structures along the track. They are hard to see in dim light at either end of the day. Will they be lit in some way to prevent accidents?

A. I think in general there should be more lighting along Riverside Drive, but there’s not enough money within this particular project budget to do that, as there are lots of challenges in getting power down to the riverside (just getting power connected to the BBQ at the end of Victoria St was a massive hassle). I’ll keep pushing for lights along Riverside Drive, though I’m mindful that some nearby apartment residents might have concerns about light pollution. I’m not too concerned about the risk of someone running into the concrete garden beds, but I’ll be keeping an eye on this. 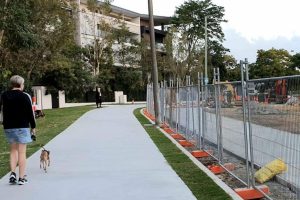 Q. What is the purpose of the troughs?

A. The concrete troughs are part seating and part garden beds with internal drainage channels. Initially the council was hoping to dig into the bitumen and plant garden beds that connected through to the soil, but they backed away from this for a couple of reasons:

Although there are some things I would have done differently (particularly in terms of public consultation) if I had absolute power and unlimited resources, I think overall this project will be a positive improvement for the neighbourhood. It really highlights for me the need for a democratic masterplanning process, because the old Riverside Drive masterplan (which never got beyond draft mode) is now very out-of-date, and didn’t anticipate the level of density we’ve seen, nor the potential impacts of a future bridge over to Toowong. Proper masterplanning requires time and money as well as a genuine political commitment to collaborating with residents, and unfortunately that’s still sorely lacking with this council administration. I expect that over the coming year or two, there will be a lot more public consultation about options and impacts for the design, function and exact location of the proposed green bridge, and this will significantly impact future options and plans for both Riverside Drive and Montague Road. I strongly encourage residents to sign up to my email updates via www.jonathansri.com/updates so I can keep you informed about changes in the local area.

Thanks to Jonathan Sri for participating in this Q&A – if there are other matters you would like The Westender to ask our elected representatives, please provide comments below.

If you enjoyed this story you can share on social media by clicking on the links below.