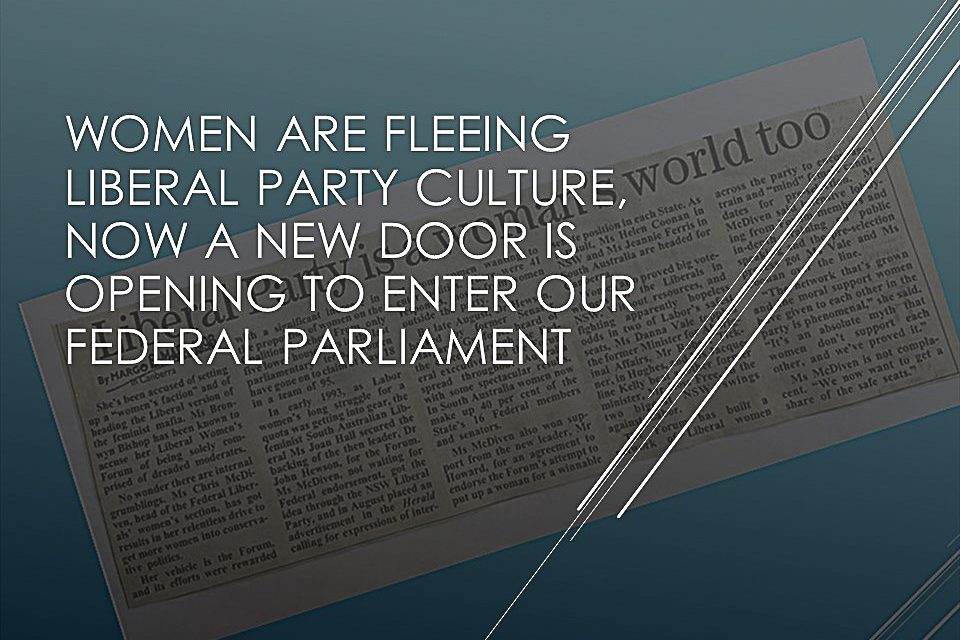 “This place attracts and rewards narcissists, and many narcissists are sociopaths,” a ‘Coalition figure with a long history working in Parliament’ told ABC reporter Andrew Probyn last week. Hard truth last month on who and what our political parties pick for us when we follow the brand not the person. Brittany Higgins’ steel-eyed testimony saw spiders crawl from under rocks and spread in all directions.

As women from both sides of politics unfurled their fury at the profoundly, deliberately unsafe workplace for women in ‘our House’ the Prime Minister, whether you believe him or not, defined leadership failure by saying he found out about an alleged rape in a Cabinet Minister’s office not from the several ministers and personal staff who already knew but by reading Samantha Maiden’s story, and that there would be no consequences for anyone who kept him in a dark on the alleged crime down the hall from his office.

In the early 1990’s a daring women’s recruitment campaign by moderate NSW Liberal Chris McDiven with the backing of then leader John Hewson  – including an ad in the Sydney Morning Herald asking interested women to give her a call – saw female Liberal MP numbers treble at the 1996 election. “The new government could for the first time put more than one token woman in Cabinet,” I wrote. Howard chose two, and his women’s minister Jocelyn Newman predicted the influx would raise ‘the tone – people outside badly want a better behaved parliament’.

But when Tony Abbott returned the Coalition to power 17 years later he appointed one woman to Cabinet and himself women’s minister. Howard and Abbott presided over the near collapse of the Party’s liberal wing; the outcome of hard right hegemony for women 23% of their federal MP’s are women compared to 47% of Labor. No surprise then that several female liberal ministers and backbenchers decried bullying and intimidation from the boys when they supported Malcolm Turnbull in the 2018 leadership spill.

The big parties are now tiny tribes run by nasty, ugly numbers men, as the recent Sixty Minutes reports in Victoria revealed. Loyalty is to the tribe, not the voters. Parliament doesn’t debate and finesse policy because decisions have been made in backrooms. Politics is performance, spin, donor service. The public interest, the pledge to govern for all of us, has collapsed; Morrison seems bored pretending sports roots was a fair process based on need. It’s a bit chicken and egg, but no wonder the talent pool is no narrow, insular, overstocked with the self serving, the corrupt, the narcissists, the sociopaths. Can anyone seriously imagine women of substance answering a Liberal Party ad for candidates in 2021?

When Turnbull fell for the second time trying to enact a solid climate change policy his exit saw Wentworth independent Kerryn Phelps take his seat with a 19% swing. I was in the public gallery to see Morrison lead a Coalition MP walkout when she stood to give her maiden speech, a contemptuous trashing of the civilised Parliamentary full house tradition. 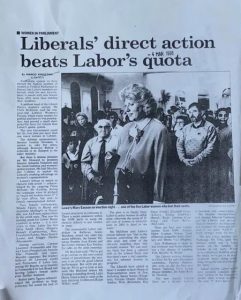 At the last election, Phelps nearly held on despite Labor being favourite to win the election, and Warringah, the blue ribbon seat the other side of Sydney Harbour, tossed Abbott for Zali Steggall with another 19 percent swing, again through a vibrant community alliance of blue, red and green voters.

Shades of 2013, when the only bright spot for Labor was Cathy McGowan, rural feminist, founder of Women in Agriculture and community development consultant, beat Sophie Mirabella in the safe Liberal seat of Indi on the back of a wildly innovative community campaign run by a group called Voices for Indi. It shared the playbook at workshops;  one participant, Louise Hislop, formed Voices for Warringah and is now an Steggall electoral officer.

When I spoke to Cathy the day after the 2013 election, she eschewed any suggestion her win had national implications. It’s all local, I have to stick to my knitting, she insisted.

Things changed after she helped her successor Helen Haines become the first independent to succeed an independent in Indi (1,800 local volunteers!). She wrote a folksy how-to-win-and-serve book called Cathy goes to Canberra and last weekend hosted the first #gettingelected conference for community independents, attracting ‘Voices for’ groups popping up in safe Liberal city seats and several regional and rural seats.

Women dominated the event – organisers, facilitators, speakers, participants. Many knew nothing about the practicalities of politics. It was, Cathy said, a gathering, a wide-eyed, excited, naive, supremely hopeful launch of a movement, full of ‘be your best self “be the change you want to see” and “never doubt that a small group of committed people can change the world”. Community before candidate, values before votes, principles before policies, that sort of thing. Has to be, because for an independent to win, she must come second on first preferences and harvest the preferences of the other candidates. That means some Liberal, Labor and Greens voters must vote 1 for her, and that means she must find enough common ground to embody the electorate.

The 300 people at Cathy’s conference last weekend want to seriously, positively disrupt our politics. They want to attract a class act to represent them, someone they trust to serve their needs and act in what they believe to be in the public interest who will always vote her conscience and be accountable to them, directly. No middle man.

An emerging community independents movement is, in essence, a response to the collapse of the liberal wing of the Liberal Party, a Party which under Andrew Peacock took Australia’s first emissions trading scheme to the electorate at the 1990 election. It is an experiment in participatory grassroots democracy to shift uncompetitive blue (and yellow in their dreams) seats into a competitive ‘conservative’ v small l blue, red, green alliance and elevate the practice of politics into a vocation of service. Buzzwords: Integrity. Informed. Inclusive.

It may lack ticker when there’s not a villain to feed off like Mirabella or Abbott or an outrage to protest like the killing of Malcolm Turnbull (Morrison is lucky Craig Kelly resigned; the Voices for Hughes contingent last weekend was very big and very focused).

But it’s getting organised, folks. IndependentsCAN is a new Party that will endorse ‘Voices for’ independents to give them the benefits of a Party without having to join it. Things like tax deductible donations, access to the electoral roll, and insurance. Founder Oliver Yates, a former Liberal Party member who stood against Josh Frydenberg as a climate change independent last election, told me “we’re trying to create an Uber service to help independents get to Parliament, to remove their competitive disadvantage against the Parties”.

This story was first published on No Fibs and is republished here with permission. The original is at this link: https://nofibs.com.au/women-are-fleeing-liberal-party-culture-now-a-new-door-is-opening-to-enter-our-federal-parliament-by-margokingston1/

Margo Kingston is Co-publisher and editor-in-chief at No Fibs, She is a retired Australian journalist and climate change activist. She is best known for her work at The Sydney Morning Herald and her weblog, Webdiary. Since 2012, Kingston has been a citizen journalist, reporting and commenting on Australian politics via Twitter and No Fibs.