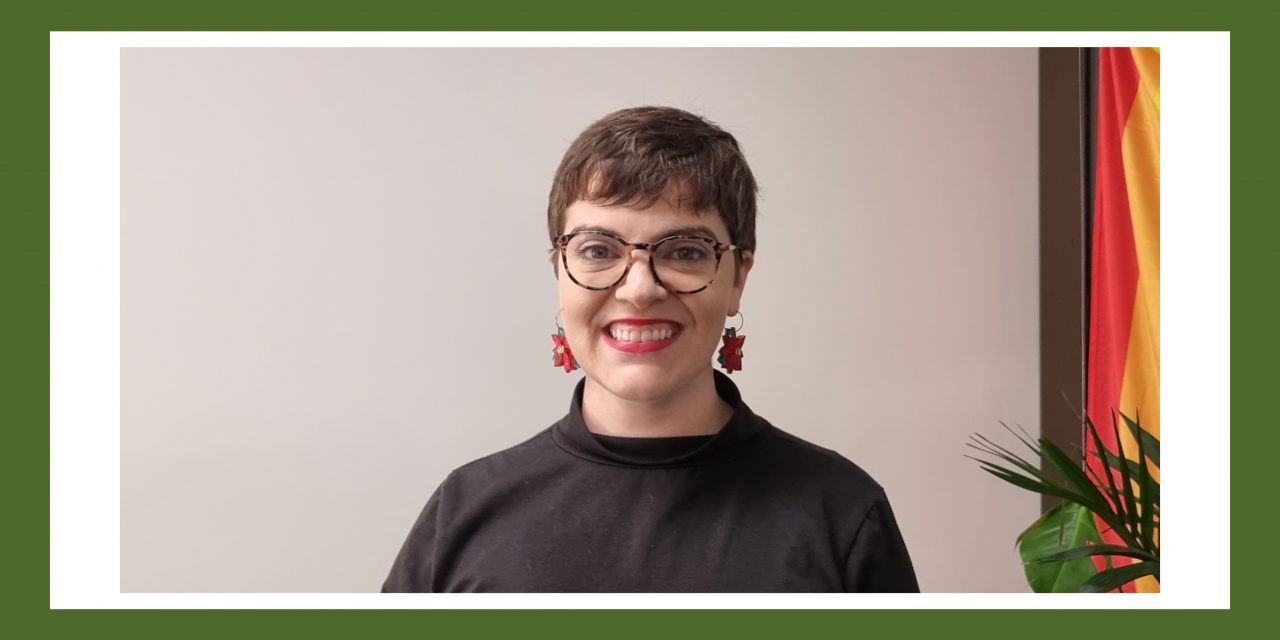 Amy MacMahon had her last face-to-face interview with The Westender on 3 December 2020 during her first sitting week as the new Member for South Brisbane. She met this month to reflect on her first year in Parliament.

When I spoke with her last year, I asked what Ms MacMahon would want to look back on in terms of achievements by mid-term. She said improvements to public transport, Montague Road, and greenspace around the cross-river rail stations. I asked her to reflect on progress in these areas.

“We have been doing some targeted campaigns around public transport and feeding into what the Council and the State Government are up to. And I think there are some really good opportunities we could be pushing further.”

“We’ve been doing a fair amount of work around the 192 bus service, to have the 192 running on evenings and weekends, which I guess is low hanging fruit in terms of improving the bus network. The community response has been really strong.”

“Beyond that, we need a pretty significant review of the bus network and we’re pushing for free public transport as well.”

“So, we’re seeing some early steps, and I think that’s feeding into a broader discussion and the community is looking at what we’re saying, “yes, that’s what we’d like.” So, green shoots, I guess.”

Ms MacMahon said that during the State election, the Government promised 50 per cent of the Gabba cross river rail site would be parkland.

“Now they’re saying open space: open space is very different to parkland. King George Square is an open space – it’s not a park. So, we’re potentially looking at what is essentially just a big, open paved boulevard to move people from the station into the Gabba.”

“This will be a terrible outcome for the community which really wants green space in the area. We’ve got this incredible opportunity in the heart of the city and the Government seems to be backing away from that commitment.”

“We’re still committing to green space there and that’s something we’ll keep pushing for – an actual commitment to 50 per cent Parkland is essential.”

Ms MacMahon has held three public forums on the 2032 Olympics during the year. Residents have raised concerns about impacts on the heritage East Brisbane Primary School and neighbourhood amenity around The Gabba and Raymond Park in Kangaroo Point.

“Brisbane, and Queensland more broadly, have never been given an opportunity to say whether or not this is something we want, or to feed into the potential benefits and legacies that could come out of something like this. So, we’ve been doing quite a bit of work to engage the community, running a survey, putting together a community vision, a series of community meetings, and connecting with community groups.”

Ms MacMahon said feedback suggests that people want to be excited about the Olympics and thinks there are incredible opportunities to come out of it.

“But in the absence of proper engagement and some assurances around East Brisbane State School, and around green space, the overall feeling is one of anxiety and apprehension. And it shouldn’t be like that. It should be a really exciting event.”

Ms McMahon said the evidence from Olympics Games held in the other cities suggested that they nearly always go over budget. She said they often displace people, especially those who sleep rough, and the flow-on economic benefits are never as significant as initially projected.

“So, Queensland does have a lot of work to do if we are going to see the benefits that have been promised to us. The games themselves should be a really joyful time for people, with long term benefits in terms of infrastructure and public transport.”

“This is one of the big issues for this community and for The Greens as well, overhauling the Planning Act, to remove this kind of loophole. Rooftop gardens are an interesting example because I think everyone would say that’s a great thing. We’d love to have some sort of requirement that any new developments have solar panels and rooftop gardens and water collection and so on. But particularly with the example of rooftop gardens, developers are able to use that as a way to get an extra storey on top and we know that the planning system at the moment is full of loopholes and developers can argue their way around all sorts of things.”

The Aria development on Glenelg Street is an example of this, Ms McMahon said.

“You whack a whole lot of plants on your renders for the building and say that it’s the greenest building in the southern hemisphere, and you’re able to get so many storeys over the neighborhood plan. This is basically free money that the community is gifting a developer.”

“I think we all hope that we will see some good outcomes, but there’s just so much green-washing that goes on from developers, and that is facilitated by the city council and by the Planning Act. So yes, we have been doing all sorts of things to get this issue on the agenda. And we know a lot of community groups are elevating this issue – there’s been so much community anger that’s been bubbling in West End for a decade or more. Now other neighbourhoods are starting to see the developments coming, and residents are saying, ‘hang on a second, I thought this was my home. I thought this was my neighbourhood and that I would have a say’.”

In the absence of opportunities for residents to engage with the Council and developers, Ms MacMahon said she and Jonathan Sri create spaces for conversations.

“People realise that the internal channels don’t work. We’ve seen developments where we’ve gotten hundreds of submissions, which account for nothing. So, what are the other kind of levers of power that the community can be pushing on to say, ‘this is unacceptable’?”

“There are still lots of big issues with development and communities getting organised. I think that’s still one of the biggest issues that we’re seeing in the intersections between development, sustainability, housing affordability and green space.”

“The housing crisis is a huge issue. We did a lot of work on this earlier around the reforms to the Renters Legislation, and we connected with lots of community groups who were pretty appalled by what was being offered by the Government. We were pushing for some real change that will actually help people on the ground who are seeing increased levels of housing insecurity and homelessness.”

“Down at the Wednesday Food Bank more and more people are coming for help – people you wouldn’t necessarily expect to need assistance. So, we know that there are issues out there.”

How does being a crossbencher in a majority government work?

Ms MacMahon said her role is to raise issues by asking questions and speaking in Parliament.

“I think one of the most powerful things we can be doing is supporting community groups to do their work as well and amplifying their voices. So, we share a lot of events, give resources to community groups, put out calls for donations: they are the kinds of things that we can do with the platform we have in a State MP’s office.”

“Parliament is such a slow, clunky institution that really isn’t equipped to respond quickly and appropriately to the needs of a modern society. But the power will really come from people on the ground.”

Ms MacMahon said she works sensitively with community groups and is mindful that not all groups are completely Greens aligned.

“We will work with anyone doing good work and who wants our help on any issue. We have a very open-door approach to all kinds of community groups.”

“We have a seat at the table, we have a say and it’s our job to be bringing community voices into Parliament with us.”

“I think community groups themselves will manage how they’re perceived. And I think less and less there’s a perception that this or that is just a Greens issue when you’ve got a wide array of voices, speaking about all kinds of things.”

“I think we have done a good job at being troublemakers, and that was always my intention. We’re not there to follow the rules and maintain the status quo. So, I think having an alternative approach to how we do things has been fun and exciting.”

“We know that people are fed up with politics. They’re fed up with politicians: no one is watching question time or listening to the clever things people say in question time. No one cares about the kind of rules that govern Parliament, that stifle debate and stop good ideas coming forward. So, I think people are looking for alternative approaches. These really old-fashioned institutions aren’t fit for purpose anymore.”

Ms MacMahon said the work The Greens did on renters’ rights was a highlight for her in 2021 because it changed the conversation about the needs of renters and raised the real possibility of change.

“We didn’t get the outcome that we wanted, which is difficult from the crossbench in a majority government. But, we’re looking forward to stage two, where we have many other reforms that the community is calling for. It’s entirely within the realm of possibility, and people can see that now.

“The disappointments have come when we’ve been pushing for things that we know are common sense, and we know the community wants, and we get stonewalled.”

“Most people want big corporations to be properly taxed. They want a levy on the big banks. They want big companies to be paying their fair share, so that we can be putting money back into the community and funding excellent free services. People want that. So, it’s disappointing to see politicians lining up behind a more conservative approach.”

“In 2022 I will be keeping an eye on the health system. It will be one of the big issues once we open up to see how our hospitals and our health care system, our aged care and mental health services deal with what’s coming.”

“We’ve been very lucky here in Queensland, really blessed, and in a lot of ways Queenslanders have done so much to keep themselves and each other’s safe. But I think that will be one of the big issues for 2022.”

“What support is there to make sure people have safe places to live?”

“Obviously, the Federal election will be a big and exciting time in 2022. There are lots of big issues we are hoping to support around climate, housing, and dental into Medicare.”