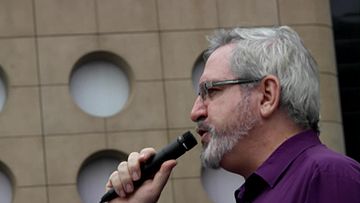 Queensland Greens Senator Andrew Bartlett has welcomed the decision of a Federal Court Judge in Brisbane not to jail six Queensland residents who engaged in peaceful protests at the Pine Gap Military Base.

The Federal government and Attorney-General George Brandis tried to escalate their charges using a draconian Cold War era law and urged the Judge to jail the protestors.

“Today marks a failed attempt by the Attorney-General and the Federal government to stifle the Pine Gap protestors’ freedom of speech and freedom to express their religious beliefs.

“The only thing this group of Christian pacifists did on the site of the Pine Gap spy base was to pray and sing songs of lament.

“The real crime is the role the Pine Gap base plays in enabling US drones to bomb and kill thousands of civilians.

“I congratulate these Queenslanders for their commitment to drawing attention to Australia’s ever-growing entanglement in US military action, and the pivotal part the Pine Gap base plays.

Senator Bartlett provided a character reference for one of the protestors, and was one of many Australians who urged the Judge to show clemency in this case.

The Judge explicitly rejected jail terms for all six peace protestors, instead fining them between $1500 and $5000.