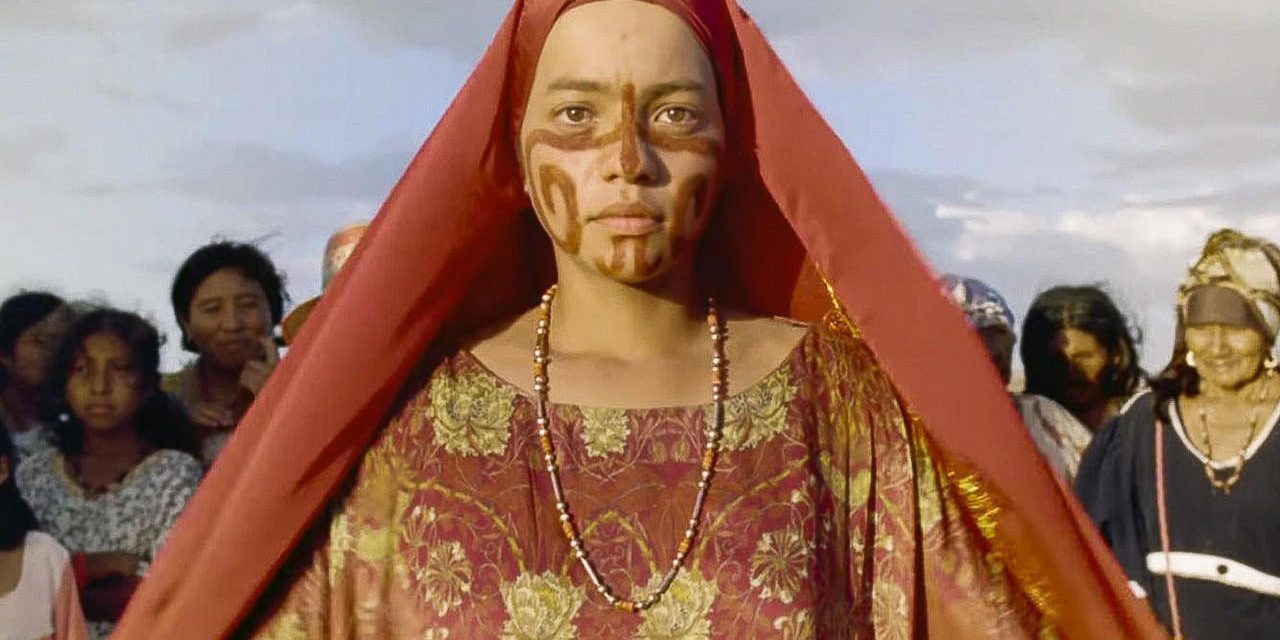 “We’ve lost the soul, nothing protects us anymore.”

From the director of Oscar nominated Embrace of the Serpent (2015) Ciro Guerra (now co-directing with producer Cristina Gallego), Birds of Passage tells the true (in the Hollywood sense) story of Colombian marijuana trade in the 60s-80s and its impact on the indigenous culture of the Wayuu people. Their previous work Embrace of the Serpent, a story about an Amazonian tribe losing their way of life, was renowned for its black-and-white visual storytelling and stood out as an arthouse gem. It’s clear that Ciro and Cristina are fixated on traditional Colombian culture and the impacts of western influence, so let’s take a good look and find out if their latest film is done as well as their debut.

The story is told in five songs (acts) (Wild Grass , The Graves, A Prosperity, The War, and Limbo). I’ll describe the first act but avoid spoiling anything beyond that.

The film opens on a young girl, Zaida (Natalia Reyes), in traditional garments and makeup. As she prepares herself inside a wooden hut, we hear whispers and unfamiliar instruments building a subtle quality of magic in the air. We learn that she has completed her year of isolation and must perform a traditional dance to celebrate her womanhood. Rapayet (José Acosta), a young and honourable man with ambition, dances with Zaida and decides he wants to marry her, however her mother and village elder Úrsula (Carmiña Martínez) sets her dowry extremely high, forcing Rapayet to find some way to pay it. Through chance, he and his fun-loving friend Moises (Jhon Narvaez) hear of Americans in town looking for marijuana and after Rapayet goes into business with his cousin’s weed-growing family, headed by strong-willed Aníbal (Juan Bautista Martínez) he and Moises begin their journey into becoming fully-fledged marijuana exporters to the USA.

Exploring a Loss of Spirituality

It should be said that while drug-trafficking is a large part of the plot, this barely feels like part of the tension. They may as well be shipping cloth, as it seems to matter more that capitalism and normal trade with the outside world is corrupting the tribe rather than drugs.

At this stage, Zaida’s desert tribe is immersed in its culture: it relies on traditional messengers to speak to tribe elders, uses a currency primarily consisting of animals, and all transport is done by walking with goats as beasts of burden. As Rapayet becomes more and more successful and immersed in trade, we see the tribe adopt more and more western ideas, and the theme becomes all too clear that this loss of culture is leading to their doom. Úrsula declares to Rapayet that, “We’ve lost the soul, nothing protects us anymore” and she is deadly serious, it’s almost as if a curse has dropped upon them.

Throughout the film many traditions are established to us that are slowly worn away at, my favourite subtle example being a native red-patterned cricket that Rapayet sees in the first act and then this same species is shown being killed en masse by pesticides to protect the ever-expanding marijuana fields. Its details like these that really speak to the film’s strengths and in my opinion provide a subtle and engaging way of delivering its political message (one that could easily be done in an obvious and contrived way).

The plot continues at this point in a very traditional structure, in layman’s terms like a Wayuu version of The Godfather. I think Macbeth is an even closer comparison though with the film’s sense of magical realism, its central tensions revolving around betrayals, hubris, greed, and of course its replication of the Shakespearean five act structure. If this is a deliberate choice, it’s an interesting one. Usually, stories as authentic as this have worked well in non-traditional subversions of plot structure, like Pather Panchali (1955) an observant realist sort of story following a poor and remote Indian family, or even Baraka (1992) which has almost no narrative and leans into pairing the raw power of visual storytelling with authentic cultural scenes. Birds of Passage however takes the route of something like Kurosawa’s Ran (1985), pairing elements of historical culture with well-told Shakespearean structure and subtle but masterful cinematography. In a way, by using a well-recognised western structure this could very well be a commentary on how western culture is influencing the Wayuu.

All this being said, the film’s storytelling feels a tad confused. At times ( like Baraka) it’s using powerful original music (by Leonardo Heiblum) and cinematography (via visions Úrsula and Zaida have, stalker-like POV shots and impressive landscape and weather shots) to instil a sense of mysticism; and at other times (like Ran) it feels reserved, i.e. most scenes where plot happens, encouraging us to watch the players. That being said, there is definitely quality to both sides of the spectrum and it feels like an adept hand is crafting each scene (the cinematographer David Gallego does a lot with natural lighting). Personally though, I would have preferred the film to lean into its visual power more as I felt some scenes were otherwise quite dry and could have used some visual oomph.

I should also mention the acting by the ensemble cast. There is a very strong core: Rapayet, Úrsula, Aníbal, and Zaida are sold really well by their actors and the conflict between them feels real and, well, Shakespearean. There are some weak links though, I felt Moises was a bit over the top and as such I didn’t buy into the guilt Rapayet feels later in the film. The English-speaking cast too could really be better. Unfortunately, like with any ensemble film, these performances drag down the rest of the cast and the believability of the plot.

With that in mind, the film is worth putting up with those flaws. There are some really engaging scenes (I’ll avoid spoilers). There’s a very Godafather-esque subplot concerning Zaida’s younger brother Leonidas (a selfish sadistic man) and his ploys to attract (the clan elder) Aníbal’s daughter which really upped the stakes of the film and created a strong sense of tension where it needed it. There’s one scene that involves a briefcase of money and a humiliation that’s particularly cringe-inducing in its implications. The other highlight for me is the final confrontation: it’s paced brilliantly and sums up the message of the film quite poignantly making great use of a black heron, a man arriving with a donkey and a gun, and the words, “We’re all dead already”.

To sum up, Birds of Passage is a worthy (if less artistically engaging) follow-up to Embrace of the Serpent. Though where it lacks in a consistent ‘wow’ factor and moments of weaker performance, it makes up for with a very solid structure that delivers its message in a way that sticks with you and begs to be analysed. I won’t give this film a rating, but I do recommend it, especially to those into arthouse cinema.