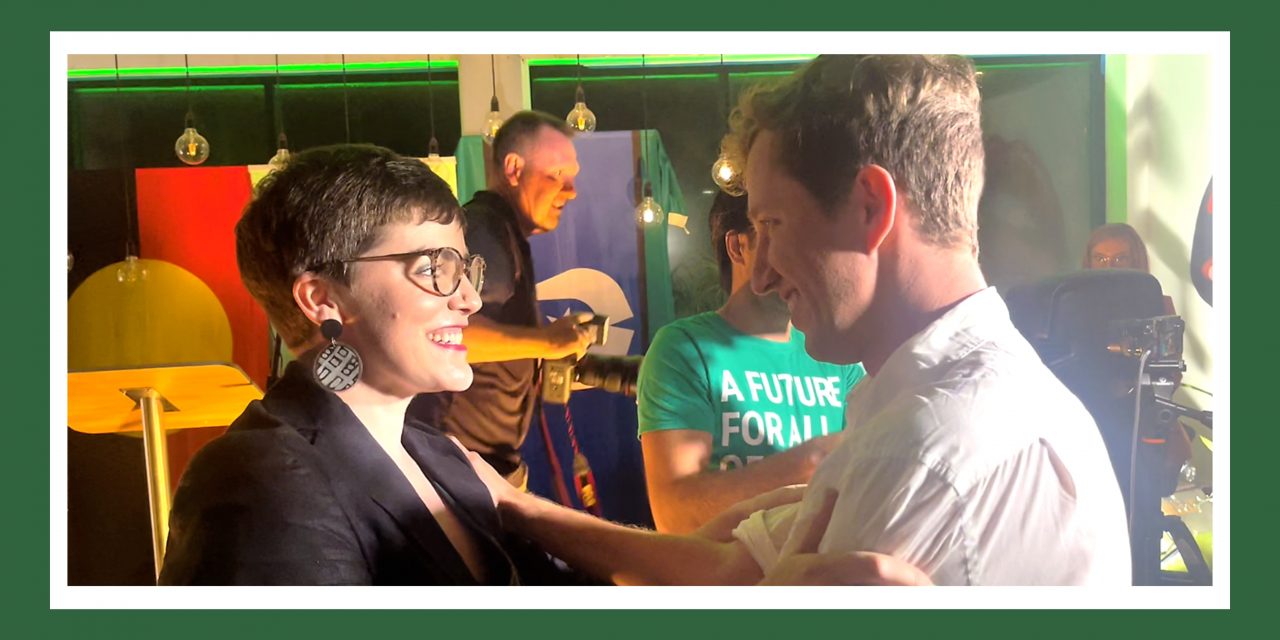 Volunteers, voters and campaign staff came together on Saturday night at the Montague Hotel in West End to celebrate the end of a long campaign fought door by door. It was quiet at first, but as results rolled in throughout the night, it became clear that the party had something to shout about.

Griffith, Ryan, and Brisbane, the city’s innermost electorates, saw huge primary vote swings towards the Greens, a staggering 12.5% toward Max Chandler-Mather in Griffith, 10.7% to Elizabeth Watson-Brown in Ryan, and 5.7% to Stephen Bates of Brisbane (at time of writing). This vote, paired with preference flows, saw the Greens pick up two more lower House seats. Griffith and Ryan have been called for the Greens, and Bates leads in Brisbane, one of only 12 seats still in doubt.

Energy was high at the Montague Hotel, volunteers in Greens shirts packed tightly into the venue to watch results as they celebrated their long campaign, dedication and hope.

“Put it this way: at our peak today [at our booth] there where 8 Greens volunteers, and every other party had a max of two.”

Upstairs, the stage was set for party leaders to address the crowd, Greens signs fighting art pieces for display, and chicken and vegan Nepalese curries being sold alongside Stone and Wood. The air was electric as graphics showing Greens swings rolled across the TV screens, with huge cheers interrupting speakers as the volunteers watched the results of their work.

Prior to speeches, the crowd was lucky enough to get a welcome to country from Derek Oram Sandy, a beautifully told story of the land Brisbane is built upon, the history of its animals, languages, and people. He spoke of hope and change, and getting people who care into positions of power. He then performed a traditional song.

“And they said we couldn’t do it!” said Chandler-Mather to rapturous applause.

His speech was run through with optimism and energy, and clearly struck a deep chord with the volunteers in the room, who were experiencing the rare joy of hard work really paying off.

“Tonight is a beacon of hope to people across this country – you do not have to settle for this political status quo,” said Chandler-Mather.

“We all have to think about that one person we spoke to. That one person in public housing, stuck for eighteen months on a dental waiting list, that single mum getting out of her house, not being able to pay the rent. Those people that we were helping clean up after the floods. And we have to think about every single one of those people and know that we were fighting for them.”

The Queensland Greens will be sending at least two new lower house members to Canberra for the next Parliament, and one new senator, teacher Penny Allman-Payne. She will accompany currently sitting Senator, Larissa Waters. As Labor tracks toward governing in its own right, it will be up to these new Greens representatives to find a way to deliver results for their electorates, and their newly grown supporter bases. Hopes will be high regarding climate, cost of living, and local issues such as aircraft noise and affordable housing.

All images by Ned Hammond