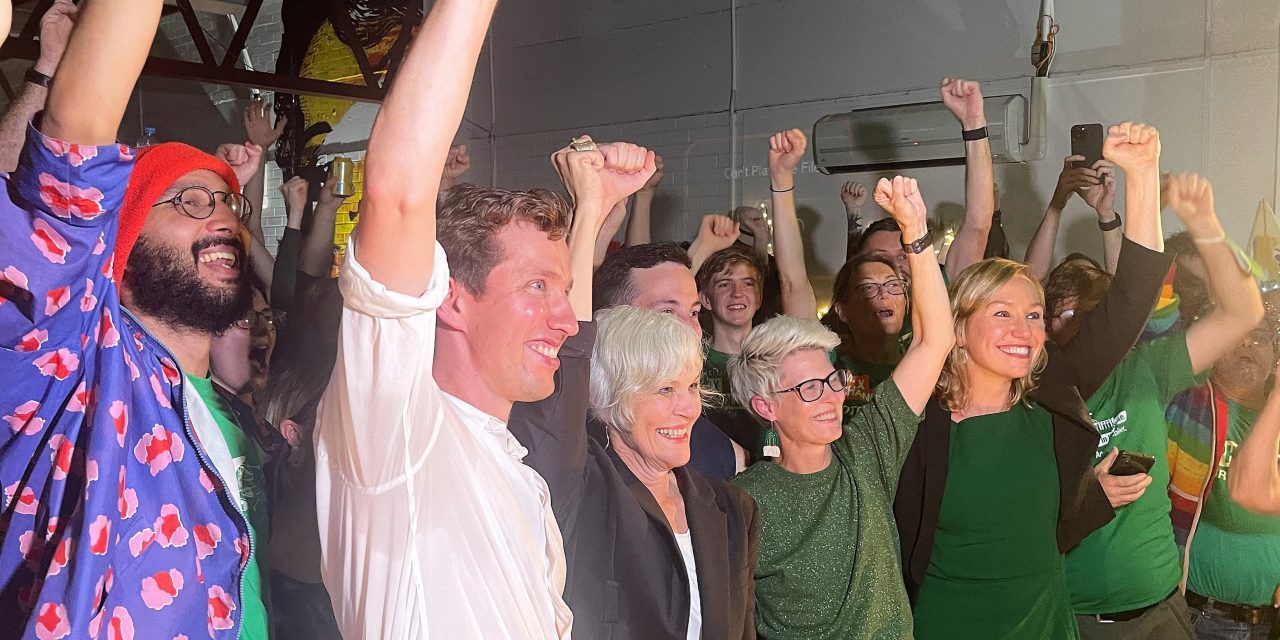 Congratulations to Max Chandler-Mather on an extraordinary result in Griffith on Saturday after a tireless grassroots campaign over the past fourteen months.

While some in the media have referred to the Greens’ surge in inner Brisbane as a ‘shock’ win, it is no surprise locally where we have seen a steady trend towards The Greens over the past decade. The move to The Greens has occurred in parallel with a growing disillusionment with two-party politics, increasing alarm about climate change, local concerns about overdevelopment, and the rental crisis. In addition, the recent floods in Brisbane, which impacted suburbs in Griffith, reinforced concerns about our preparedness in the face of the impacts of a changing climate. All issues we follow closely at the Westender.

Griffith attracted national attention from 2007 to 2010, and again in 2013, when it was the seat of the serving Prime Minister. It takes in the state seat of South Brisbane, which has been the seat of a Premier and Deputy Premier, and at the local government level, The Gabba, was at one time the ward of a Lord Mayor. Th historic win this weekend has again put Griffith in the national spotlight.

We now have Greens representatives in local and state government in parts of Griffith, and of course in the Federal seat itself. The Greens have also claimed the inner-city seats of Ryan and are on course to gain Brisbane, as well as a Queensland senate seat.

This election win, both locally and nationally, underlines community demand for more urgent action on climate change. It also changes the way politics will be done in Australia, challenging the two-party system, and bringing greater diversity and expanded representation to the parliament.

Max Chandler-Mather and the Greens have made some ambitious promises, including 100% renewables by 2030, dental into Medicare, free childcare, caps on rents, and free university and TAFE. Addressing aircraft noise and the promise to legislate a curfew on flights into Brisbane has been a key plank of Chandler-Mather’s local campaign along with his Greens colleagues in Ryan and Brisbane.

We acknowledge outgoing member Terri Butler. Ms Butler has been a hardworking, progressive woman in Griffith since being elected in 2014. She has worked closely with community organisations, sporting clubs, and charities. She has also been touted as a future Labor leader and has held a range of shadow portfolios, most recently as Shadow Minister for the Environment.

Ms Butler conceded her seat on Sunday. She wished her replacement well, and thanked her staff and supporters.

“Finally to the people of Griffith, thank you for the privilege of representing you since 2014. I spent all of those years in Opposition fighting the Liberals & Nationals.”

“I’m so pleased that as I leave the parliament they have been replaced by an Albanese Labor government with a plan for a better future,” Ms Butler wrote.

We wish Terri all the best in whatever she chooses for her future.

Whether Labor can secure a majority or governs with the support of the crossbench, this election heralds new hope for Australia. We can finally put the climate wars to rest, bring a more humane approach to asylum seekers, enshrine a First Nations Voice to parliament, and create opportunities to foster genuine support for diversity.

We look forward to keeping readers updated as these developments play out here in Griffith.