Ever thought of having a Coffee with the Cops? 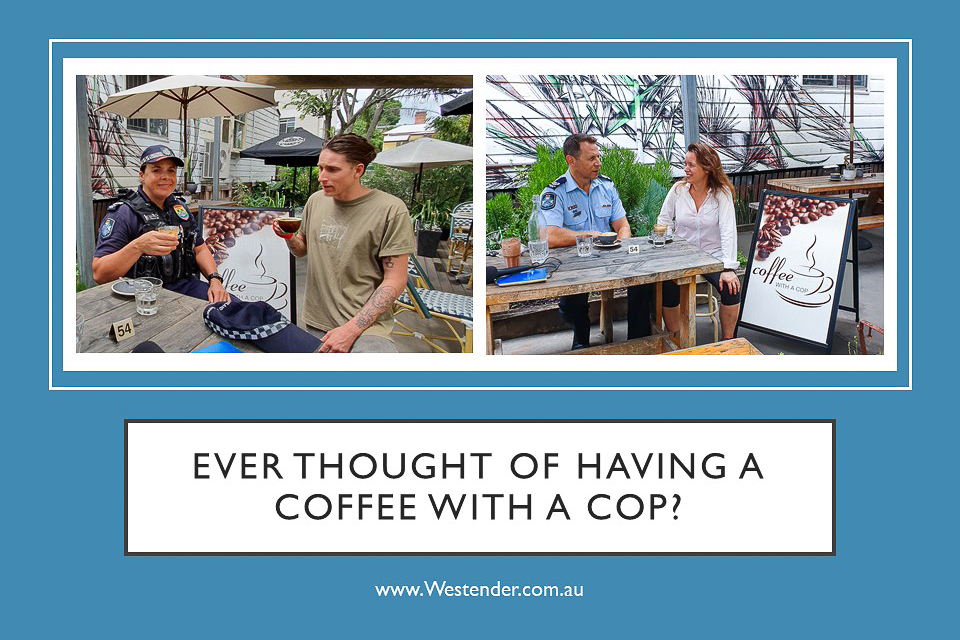 “Coffee with a Cop”

Sandi Trembath described Coffee with a Cop as an informal and relaxed community engagement tool that QPS uses to enable Police to interact with the broader community.

The concept originated in the United States and was brought to Queensland by Senior Constable Samantha Schofield and Administrative Officer Pauline Dunn from Capalaba, where it started a few years ago.

Geoff Douglas said that often people may have a question for the Police, but would prefer not to bother them, or they just don’t want to come into the Police Station – so the coffee shop environment he said, facilitates that conversation.

West End Police, with Sandi Trembath, plan to commence the program at Sol Bakery opposite West End State School, from 8.00am – 10.00am on Friday the 7th of February and to run it on every 1st and 3rd Friday of the month thereafter. The time and locations will vary, but will usually be in the morning.

To find out where the next venue will be Sandi will share information on local community face book pages, notice boards, and on the Westender.  She said that if people are really keen to come they can call the station and ask for her on 3840 9100.

Locations will be chosen based on foot traffic, crime trends, and calls for service. West End Police already have several local cafes on board.

Grab a coffee and ask a question

The idea is that people get their own coffee and take the opportunity to talk to local police.

That is exactly what happened when I sat down with Sandi and Geoff. Local Barista, Jack, joined us for a while and loved the idea.

Geoff Douglas told us that the problem for police is that they tend to only have contact with a certain proportion of the community – people who commit crime and their victims.

“We take our responsibility to keep the community safe, and to feel safe, very seriously,” Geoff said.

“So, we want to build trust in the local Police, and you get that trust by building local relationships, getting to know the community, and doing that consistently. Then if people need us, they know we are going to respond and take what they say seriously.”

Sandi Trembath is the ideal officer to be leading the Coffee with a Cop program in West End. She is well known locally as our Community Beat officer.

In October last year, Sandi was one of six QPS officers who were recognised for their on-going service to the community that went above and beyond their policing duties. Sandi was recognised for the way in which she builds trust with vulnerable people in the community through her knowledge of various cultures, especially Aboriginal and Torres Strait Islander people, mental illnesses and trauma.

I asked Sandi about various badges she wears on her uniform. She said she wears the Aboriginal and Torres Strait Islander flags, because “I always think it is important to acknowledge the traditional owners of the land.”

She also wears the rainbow flag which she said acknowledges the LGBTIQ community. Sandi said that wearing these badges can build immediate rapport with people. She has even had LGBTIQ people cry when they have seen the rainbow badge, “because it is acknowledging their rights,” she said.

My conversation with Sandi and Geoff was pretty free ranging. They said they are happy to answer anything, save of course details of current investigations.

Here are their answers to my questions – if you have questions of your own, see them at a coffee shop near you soon.

Posting about crime on social media

I asked Sandi and Geoff about the frequent reports I see on social media about local property crime, particularly bike theft.

“We love that the community is looking out for things that are happening and sharing it,” Sandi said, “but when you share on social media, you must make sure that you are also safe”.

And Geoff added, the QPS is not resourced to trawl social media for crime information, so sharing on social media is fine, but reporting the crime to police is also vital.

Property theft is a key issue in West End Sandi and Geoff told me.

Geoff said that the West End Police are dealing with recurring issues concerning insecure underground carparks in high-rise buildings, particularly as this type of dwelling is becoming so prominent in the area.

The QPS is working with the owners and operators of the buildings, by providing crime-prevention advice and sharing information about persons of interest who may be targeting certain areas.

Sandi said that while these carparks are often described as secure by building operators, this can lull residents into a false sense of security. People will often leave their cars unlocked. The simple message is she said, always lock your car, and do not leave anything of value in it. The storage cages common in these buildings are usually made of wire mesh and so they are also very easy to break into, she said. Further, these buildings can have up to 200 residents, so it is easy for people who enter them to go unnoticed.

Sandi said that another concerning issue in West End is the growing number of offenders who will enter homes via unlocked doors. They will enter through back doors and snatch purses and bags while residents are at home watching TV in another room.

“This is an indication of the levels of desperation some people experience as a result of addiction,” Sandi said.

While bike-theft is not necessarily the most prevalent or concerning of crimes in West End, it does get a lot of social media coverage and is clearly a real frustration for people, especially for those whose bike is their major means of transport.

Sandi said it is easy to report bike theft, by calling POLICELINK on 131 444 You can even report on-line.

While police are on the beat 24 hours, the reception desk at West End Police station is only staffed between 8.00am and 3.15pm. Dutton Park has a reception open 24 hours. So, Geoff and Sandi suggest reporting bike theft on-line or to PoliceLink. West End Police will receive these reports and will manage any follow-up.

But a frustration for Police is that people are often unable to provide the relevant details for their bike.

“We would love it if people would take photographs of their bikes, and of the serial number, and make of record of anything that is unique about the bike. That really helps us to find it. Every day Police will seize stolen bikes. Those bikes are taken back to the station, and we spend sometimes hours trying to find the owner, but quite often we can’t because the theft has not been reported, or there is no record of the serial number,” Sandi said.

Another reason the QPS has difficulties linking stolen bike with their owners, it that stolen bikes do not usually stay in the area, so even if the Police recover a bike, if there is no record of the theft, or no record of the serial number, it is very difficult to return it to the owner.

This is one of the reasons, QPS has set up West End Serial Hub. It is an easy way for people to register their bikes with police.

As to prevention, Sandi said that investment in a heavy-duty bike-lock may be worthwhile, because standard bike-locks are very easy to cut through.

When should I call the Police?

Sandi said when she visits businesses in the South Brisbane area, to discuss personal safety, she often finds that people will confide in her during conversations about crimes they have not reported. There is a reluctance she said for people to call 000.

The rule of thumb is, if a crime is happening ‘now’, for example if someone is trying to break into your home, or is stealing a bike, or even if someone is standing in the middle of the road yelling, (that’s a crime), call 000.

If, however, the matter is less urgent, for example, if you find that your car was broken into overnight, then call PoliceLink on 131 444. But do call, Sandi said, the Police do need to know what has happened.

The Westender plans to bring you more stories about Community Policing, so if you can’t get to Coffee with a Cop, and you have a general question, ask us here and we will pass it on for a response.

Coffee with a Cop

Where: Sol Bakery on the corner of Hardgrave Road and Vulture Street.

Then the first and third Friday of the month, with locations to be advised.

For more information about Coffee with a Cop, see HERE