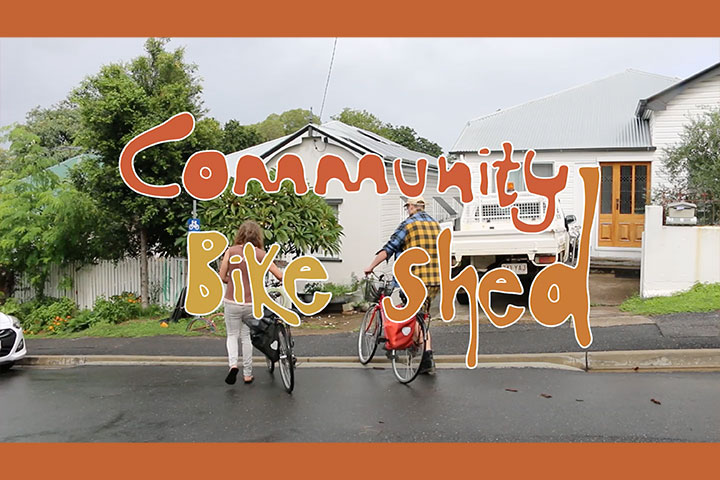 The share-house-turn-community hub of Turnstyle in Laura St, South Brisbane, first started with bikes for a climate conference and quickly morphed into the only bike kitchen in Brisbane.  Building bikes paved the way for a much larger community-driven space that has lasted for over 16 years. Community Bike Shed is a film on the beginnings of the Bike Shed at Turnstyle.

*The share-house of Turnstyle has been sold. It is currently looking to house the bike shed along with the various community groups that meet there.

Sam Wheat is an artist, musician, and active participant in grassroots community events in the South Brisbane / West End area.  A sign language interpreter by day and an avid cyclist between home and other destinations, he dabbles in helping out at Turnstyle’s Bike Shed along with organising ad hoc music jams in public parks that encourage friends to dust off their instruments and make tunes together.

*Izzy Bartlett also played an important role in making this film. Check out her photography on Instagram here.

TELL US ABOUT COMMUNITY BIKE TIME, WHAT INSPIRED YOU TO MAKE IT?

The story is told in the documentary about how this bike shed started. Basically, some community-minded young people living in a share house decided that maybe they could build bikes for people who needed them. It grew and grew into a bike kitchen in Brisbane. Sixteen years later it still hosts the bike shed. It’s still just a regular share house—people live upstairs and pay the rent on a private lease. What they’ve done though is curate a space under the house that is available to the community for things that they see are beneficial to social change or to community growth. This includes a food buyers cooperative, the bike shed, and a bunch of other groups.

The bike shed is a library of tools, an inventory of second-hand bikes, and bike parts that are available to the community to come and use. We also have some bike enthusiasts here who volunteer. We’re not here to replace the bike shop or fix people’s bikes for them, we hope that we can help people learn to fix their own bikes.

I thought it was a unique and interesting story to tell the history of its inception and how and why it started. I had the Brisbane Bike Film Festival in mind when I made it. We wanted to tell the story of the resource of the tools and the parts used by people who might know a bit about fixing a bike so they can exchange knowledge with each other in this space.

I’m a rank amateur filmmaker. So I enlisted the help of my then-housemate Izzy Bartlett. She has much more experience than me with a camera and she’s pretty good at getting a shot. She did almost all the camera work for the documentary. I’ve had a little bit of practice editing videos. So I did a rough edit and put the story together. Then Izzy came in again and really put the final touches on the documentary.

WHAT’S THE BRISBANE BICYCLE FILM FESTIVAL AND HOW DID YOU GET INVOLVED?

Brisbane Bike Bites is a fundraiser for Space for Cycling, a volunteer-run bicycle advocacy group in Brisbane. It’s the night of nights of cycling in Brisbane. It starts with a big group bike ride from the city to the venue. They have a cargo bike expo where you can check out some cool bikes and it’s just a nice opportunity to meet all the cyclists around Brisbane and watch some cute films based around Brisbane and cycling specifically. I’m a fairly active member of Space for Cycling Brisbane.  Around election time we invite everyone running for the government on a bicycle ride with us. We show them some of the really rideable infrastructure parts of the city, and then we show them some of the parts that are missing links. That’s a really good eye-opener for our politicians to see the infrastructure, and sometimes, lack of, in Brisbane. We attend the active transport committee meetings and council meetings and make our presence known to get our voice heard as the cycling community amongst the decision-makers in that space.

HOW HAS YOUR TIME LIVING IN WEST END INFLUENCED YOU AND YOUR ACTIVE CONTRIBUTION TO GRASSROOTS COMMUNITY EVENTS?

I met Turnstyle about nine years ago when I joined the bulk buyers group, the food co-op that meets here. I moved away from Brisbane and then three years ago, I had a big change in my life and moved back to Brisbane. I moved into Turnstyle. I was already a cycling enthusiast. I believe in cycling as the ultimate form of transport and incredibly convenient. Having worked on my own bikes a bit I had enough knowledge to be able to volunteer and be useful to some people who were coming to the bike shed here on a Sunday morning.

I really value a sense of place and belonging and community. That’s like a high need for me. I love the feeling of just going for a walk or to the markets and people bumping into me and knowing my name. That really gives me a sense of belonging. That’s what I love about it. I live very locally as well. I loathe driving cars so living very locally in West End allows me to do everything by bicycle.

Over the last couple of years, we’ve seen a number of houses in Laura Street be renovated and sold for surprisingly high amounts of money. I think we’ve seen six houses sold in the last couple of years in this small street.  Unfortunately, what’s happening to Turnstyle now is something we knew might one day happen but hoped wouldn’t happen so soon. The owner of the property is selling the house. Turnstyle’s got an eviction notice. The residents need to be out by late February.

There’s so much to say about how housing for profit is broken, in Australia, in Brisbane, and in West End. All I will say is that this place has been so welcoming of people, of community groups. It’s been a place that has done so much good. The number of good things that have gone on here is countless and it’s incredibly sad to see what was a home and a hub to so many people in so many community groups be displaced and a new fence built, to see the house painted gray and blend in with the rest of the street.

Since connecting with Turnstyle and meeting these people, it’s changed my politics and expanded my worldview. It’s made me more aware of my privilege and more compassionate for the whole spectrum of people that as humans we share the world with and share this society with.

WHAT’S GOING TO HAPPEN TO THE BIKE SHED? DOES IT HAVE A NEW HOME?

The bike shed has to move out of here in three weeks (end of February 2022). There’s currently no plan. We’re looking for a new home that needs to be free of charge. Preferably in 4101. It needs to be a space where diversity is welcomed.

For more information over Turnstyle, the bike shed, its community groups, or if you think you can house the bike shed – get in touch with the community through the Turnstyle facebook page.