Community Group says, “Thanks, but no thanks” to latest instalment at West Village 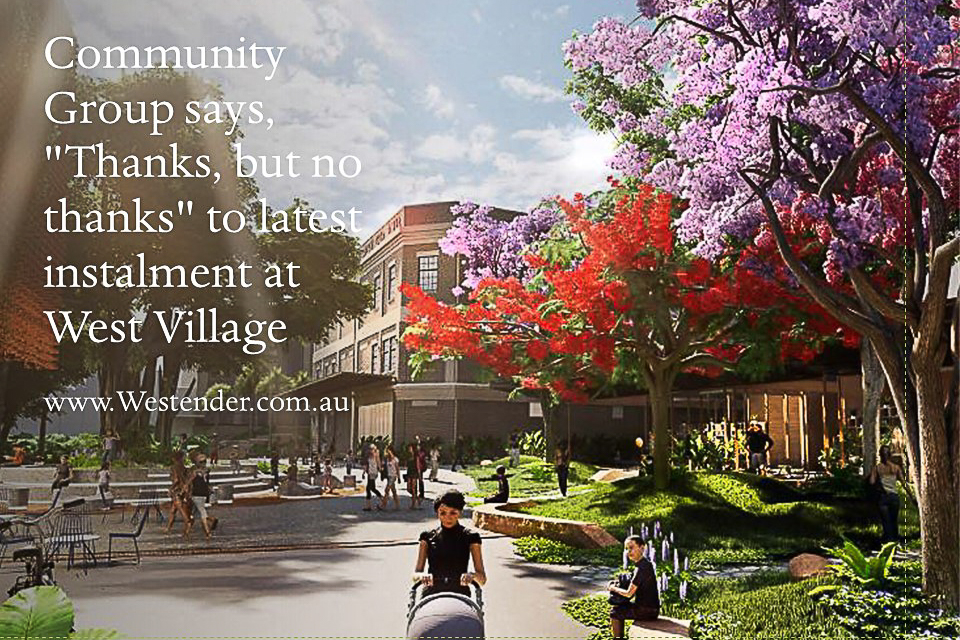 Kurilpa Futures has joined State Member for South Brisbane, the Hon Jackie Trad, and local Councillor for the Gabba, Jonathon Sri, in lodging objections to the most recent proposed extensions of West Village’s high-rise development in the heart of  West End.

The most recent application, lodged on behalf of West Village developer Sekisui House, is for a proposed change of designated use to offices, food and drink outlets, and shopping.

Ms Trad met with Kurilpa Futures to discuss a number of concerns raised by the community regarding the use of the space.

Ms Trad said, “the State Government’s provisional approval of the plan was conditional on the site having an improved layout and increase public open space.”

“I support calls from the community to reject the proposal, and for future decisions or redesigns submitted to the Brisbane City Council to consider the long-term planning of the peninsula, including access to public amenities,” Ms Trad said.

The developer’s intentions for the next instalment of this nearly three-hectare development, have been made clear in an application currently being considered by Brisbane City Council planners and its Planning Committee.

The proposal aims to secure approval for the completion of the intended 1340 new dwellings, rising 22 storeys to more than 70 metres above the busy street life and corner cafes of Boundary and Mollison streets. By claiming to be in accord with the overall Preliminary Approval of 2016, and the South Brisbane Riverside Neighborhood Plan (SBRNP), the application seeks to be “Code Assessable” which limits public rights of objection.

Kurilpa Futures’ Planning Spokesperson, Phil Heywood, an Adjunct Associate Professor of Community Planning at QUT, says that Council should reject the application out of hand because it does not comply with the SBRNP nor with the State Government’s Preliminary Approval.

Approval for the development had been conditional on improved site layout and increased areas of public open space.

Landscape plans drawn up by award-winning local Landscape Architect, John Mongard, indicate that about half the proposed open space would be for hard standing and circulation purposes and would be dominated by outdoor dining. 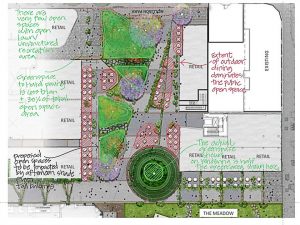 Mr Mongard said the result of the current application would, therefore, be to reduce the amount of proposed usable open space by promoting its commercialisation and conversion to small, hardstand areas more useful for outdoor dining and café purposes than for the intended informal family recreation.

“This area could best be described as a food court masquerading as public space,” Mr Mongard said.

Mr Mongard added that the deep planting indicated along the Mollison Street frontage would constitute a forest at the edge of the development, which would separate the open space physically from the public pathway and result in a visual rather than an active function.

West End resident and active Kurilpa Futures member, Mr Michael Kelly, added that the poor integration of the proposed open spaces with the existing streetscape would represent commercialisation of what was intended to be public space.  Instead, he said, the new open spaces should be freely accessible, irrespective of intention to buy or consume food.

“These characteristics, were already evident in the open spaces provided in Stages One and Two of West Village, fronting Boundary Street. Much of the designated open space there is cosmetic or commercial rather than active or recreational,” said Mr Kelly.

Mr Heywood noted that the State Government’s original Provisional Approval required that, “Mollison Green shall be embellished to provide a family-friendly environment with opportunities for children’s play and recreation”. Instead, he said, the smaller pockets of open space in the proposed “Mollison Park” may (in the words of the Council Planning team at the pre-lodgment meeting)  “function more as Greenspace amenity than as useable Greenspace or parkland as intended.”

From his perspective as a Community Planner, Mr Heywood said the application does not accord with the evident needs of the neighbourhood.

“We need genuine new public open and green space to match the population increase of over 2,500 persons involved in the proposed three stages of the West Village development.”

“Furthermore, it is not clear that it complies with the stipulations of Planning Outcome 4 of the SBRNP that all new developments should not exceed 80% of the site area,” Mr Haywood said.

Finally, the proposal conflicts with the conditions for family-friendly open space attached to the Preliminary Approval by the State government.

“As a consequence, this application proposes excessive amounts of hard paving within its open spaces and fails to provide adequate open lawn areas for flexible usage. Outdoor dining/leasable areas should not be situated within the public open space provisions.”

“The developer should be delivering its outdoor dining spaces and café areas within the planned commercial development area of 80% of site coverage,” Mr Heywood said.

Kurilpa Futures has therefore lodged an objection stating that Council should refuse the proposed development application, and advise the applicant to increase public open and green space to meet the existing conditions as originally stipulated.

“Mollison Green shall be embellished to provide a family-friendly environment with opportunities for children’s play and recreation”.

How to lodge an objection

People wanting to lodge a submission to Brisbane City Council will have to be quick: the closing date is this Friday, July 24.

Simply go on-line to Brisbane City Council PD online and insert the Application Number A005483067, and follow the prompts to lodge your submission. A link the application A005483067 is HERE