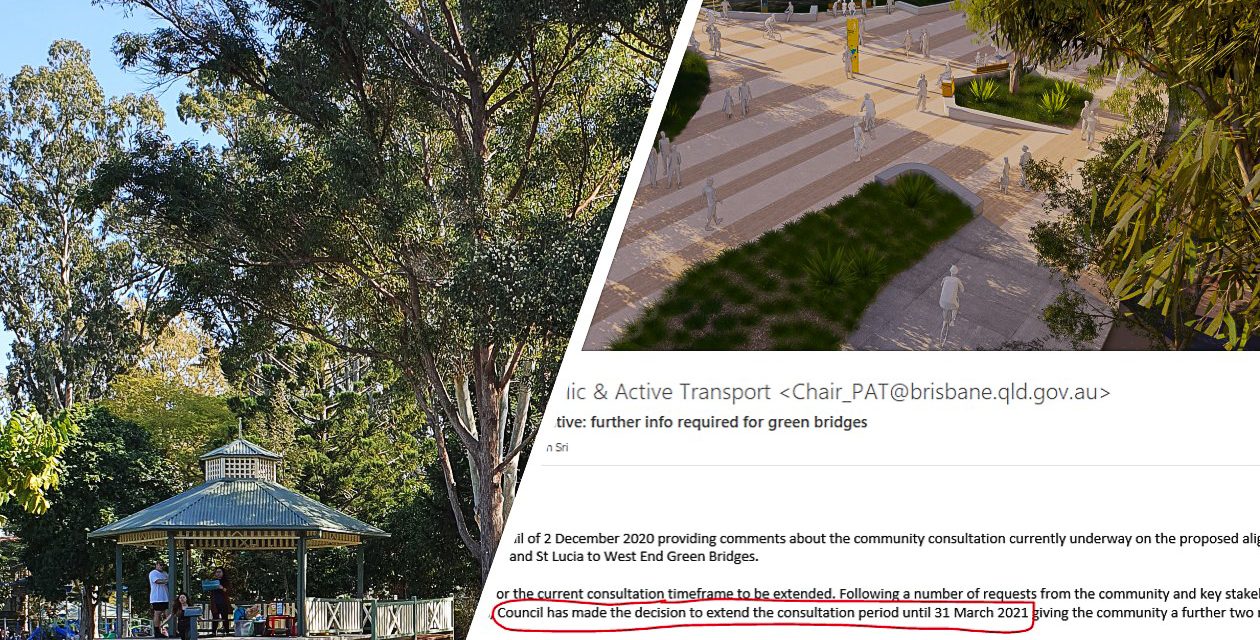 Yesterday, Chair of Council’s Public and Active Transport Committee, Councillor Ryan Murphy advised Councillor Sri that Council has listened to community concerns and will be extending the consultation period for its Green Bridges program for two months, to the end of March.

Residents and community groups may disagree on some of the detail, but they have been united in their concerns about the timing of Brisbane City Council’s Green Bridges engagement process being held over the Christmas and New Year season.

Kurilpa Futures and West End Community Association (WECA) on the West End side, and Brisbane Residents United (BRU) on the other side of the river have called for the consultation process, initially set to end on 29 January, to be extended.

Gabba Ward Councillor, Jonathan Sri, and Member for Maiwar, Michael Berkman, have also been calling on Council to extend the timeframe.

“A lot of residents have been raising concerns about the rushed consultation period over summer, which meant lots of people would’ve missed out on having their voices heard. I’m very pleased to see that Council confirmed today it would extend consultation until 31 March, which will give residents more time to deliberate and provide informed feedback,” Councillor Sri said yesterday.

Community groups have also welcomed the extension of time, but not without qualification.

“We welcome the extension of the consultation. It’s clear that river communities need more time and detail to make an informed decision on the value of significant infrastructure.”

“We hope council continues to act in good faith and deliver detailed design (building envelope), figures for trip modelling, and the impact on the river and green assets.”

“It is pleasing to hear that BCC has responded to residents’ pleas for more time. We hope they are as responsive about providing the necessary background information and their assumptions so the community can make a well-informed decision,” Ms Handley said.

Kurilpa Futures has been critical not just of Council’s timeframe, but of its online survey as well.

“We welcome Council’s decision to extend the consultation period to 31 March and would encourage Council to make changes to its survey to allow residents to choose no bridges as an option,” Kurilpa Futures spokesperson, Pam Bourke said.

David Pincus of Friends of Guyatt Park said the extension of time is a step in the right direction but remains unconvinced by Council’s broader process.

“The Council states airily that they will start formulating a business plan in 2024. They decide what to do, then find out whether it is justified. It is nonsense,” Mr Pincus said.

Mr Pincus said that Friends of Guyatt Park is trying to show that there is a groundswell of opposition to the idea of using green space unnecessarily, “… when (a) there are alternative sites that do not trash the valuable and scarce green space and (b) no convincing case for a Green Bridge from West End to St Lucia has been made by the Council.”

“…we don’t know what assumptions the design of these bridges has been based on, and there’s no information that we can make a reasoned decision from. The process is so important, because where you start defines where you end up, and the quality of the outcome.”

Ms Handley echoed concerns raised by residents attending Council information sessions on both sides of the river last week, about the quality of the information justifying the two bridges.

Speaking at one of Council’s pop-up information sessions last week, Pam Bourke said the consultation process is “too little and far too late”.

“… you only have a choice between A, B or C for either of the bridge options. There isn’t much flexibility …”

Margot and others have said that a consultation process that only engages people individually and does not provide for group discussion makes the process frustrating.

“… we think we know the [options] that the Council wants, but they’re putting us through this process and saying, okay, which ones do you want? And they’ve already made their mind up. That’s what it feels like,” Margot said.

“There’s also been very little information about what other locations were considered, and why other location options might have been excluded. There’s no clear information about how much money is going to be spent on associated, and I would argue, essential infrastructure such as connections to the bridge locations. And that’s important because for any bridge location, whether or not you think it’s a good location, depends a lot on whether there are going to be bike lanes connecting to it, and pedestrian crossings, and all the associated land-based stuff that gets you to the bridge, and particularly for any infrastructure around the Montague Road precinct.”

Robert Preston, President of the South Brisbane Sailing Club said he is optimistic that Council will improve its consultation process. He said that the Club has had a productive and fair meeting with Council, but hopes Council will provide information that is more than just conceptual.

“I guess that’s where we’re hopeful that the Council at some point in time will give more information to the community. And that way the community, and interest groups such as the Sailing Club, and the Rowing Club, can provide more informed feedback,” Mr Preston said.

He said that the main concern for the sailing club is any impacts, from bridge pylons for example, on the safety for sailors and rowers.

“If there was actually a lot of impact on maritime safety, then that would present an issue for the club, because it is a challenging section of river… three pylons may make it so impactful that it would not make the club viable in the long term,” Mr Preston said.

Several raised the issue of improving the ferry service as an alternative to building bridges. Nicole, a resident in St Lucia, wondered about a high frequency Kitty Kat service between Guyatt Park and West End, and another St Lucia resident, Margot, wondered why we don’t use the Council built recreational hubs on the river at West End and Dutton Park for river taxis, for example.

Cr Sri supports a bridge from Toowong to West End, but says that he thinks a second CityCat terminal for the western side of West End is probably a higher priority than a St Lucia footbridge.

Cr Sri says one of the difficulties with a consultation process such as this one, is that the benefits and impacts of the project are not evenly dispersed.

“So, lots and lots of people get a slight benefit in terms of increased access, and then a much smaller number of people probably have significant negative impacts in terms of additional foot traffic in their neighbourhood, or in some cases, impacts on views and in a few cases, home resumptions. So, for a project where the benefits and negative impacts are not evenly distributed, you need a consultation process that counteracts or adjusts for that. And consultation processes that rely on people to be quite proactive about having their voices heard, are going to tend towards bias in over-representing the voices that are most negatively impacted by a project.”

Cr Sri is also concerned that younger people are not being engaged with in the consultation process, and the dominant voices are those of older residents and homeowners.

Michael Berkman agreed that the impacts and benefits of the landing site options for the bridges will be different for different communities.

“We need to have an understanding of the full picture. It’s great to see this willingness to invest in big bits of important active transport infrastructure, because I think for too many years, Council has taken a very car-centric approach …. So, I really do welcome these proposals. We just need to make sure that the community voice is heard in the final design and the locations …”

Mr Berkman said that questions of land resumptions loom large, but said we also need to bear in mind the potential impacts on the green space that exists on both sides of the river.

“… we’ve got to have a pretty direct and open conversation about what resumption means and when it’s appropriate … but I think the inexorable trend has been the loss of green space. And I don’t think we can afford to see that continue,” Mr Berkman said.

The Friends of Guyatt Park are unapologetic when it comes to protecting the park. David Pincus said that the reason the favoured option for the St Lucia Bridge has landing points in Orleigh and Guyatt Parks is because that land is already owned by Council and therefore will not require the purchase of private properties.

Mr Pincus says he feels sorry for those people who are impacted by potential home resumptions.

“But as against their dislocation, the disappearance of Guyett Park may be too high of a price to pay,” Mr Pincus said.

Cr Sri said it would be helpful to see the conversation broadened.

“A best-case scenario would be if they said, “Here’s how much money we think a bridge is going to cost. How do you think we should spend it?” And really open it up and say, “Well, this is your money, what are all the options on the table of how we could spend $150 to $200 million.” That would be a better approach.”

How to provide feedback

Brisbane City Council has already run six community information sessions and had not planned to run more: that may change with the extension of the consultation period.

The consultation process will now remain open until 31 March, and residents and other stakeholders can complete an online survey and or prepare a submission for Council.

Community groups on both sides of the river have been sharing information between each other and with their communities, and are inviting community feedback. They can also assist residents with the submission process.

Friends of Guyatt Park, with their local Councillor, James Mackay, have a singular focus on saving the park. They are running an online petition and are planning to hold a public rally in late January.

Other groups have formed in Boundary Street and in Ryan Street where landing options include the potential for private home and land resumptions. Signs now line Boundary Street, saying “No Mega Bridge.”

Listen to the interview with Cr Jonathan Sri from 10 December, before the announced extension:

Listen to audio here with comments from residents and community group representatives, including Michael Berkman recorded at pop-up sessions held by Council on 9 and 10 December.

For related stories go to this link https://westender.com.au/discussing/news/local/