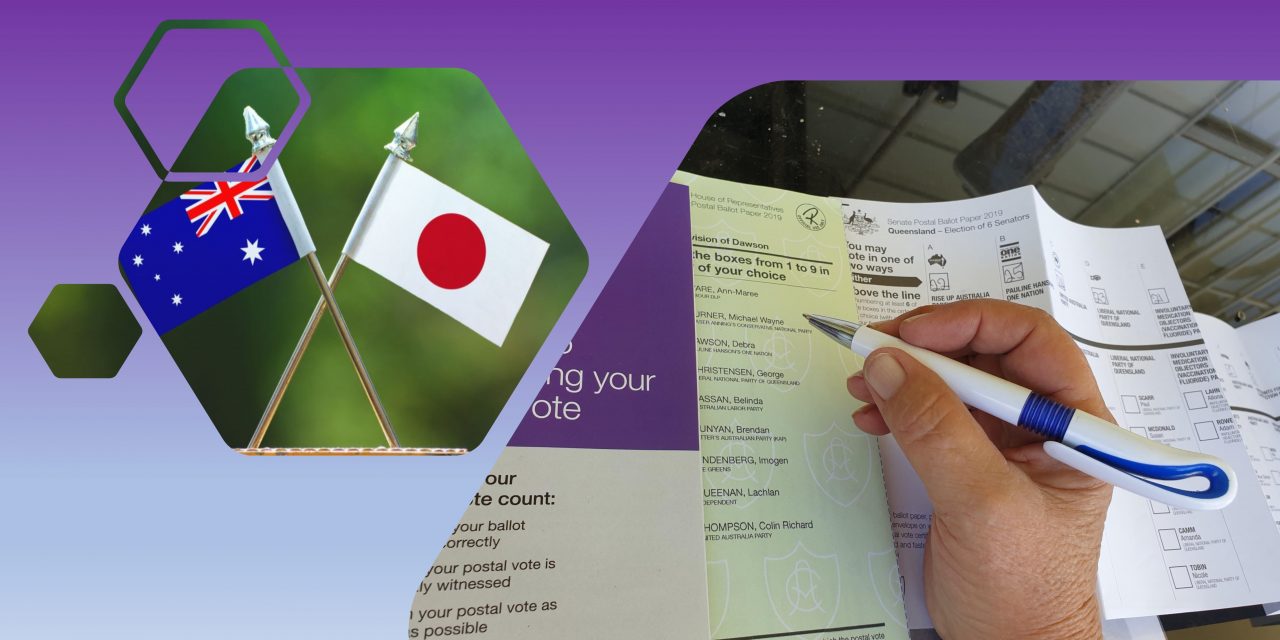 It is now approaching two weeks since the Federal Election and though not yet formally declared, we have a sense of what the new government will look like. I was supposed to be home for the 2022 election. I had voted in the 2016 and 2019 elections, from Tokyo during what was going to be a short-term stint overseas. Covid restrictions meant extending that stay.

Despite the result in Griffith coming through fairly quickly, I have spent some of the time wondering about my vote, or my papers to be more exact. You see, I am probably not your typical Griffith constituent, I am a political analyst by profession, and in particular, I follow elections in both Japan and Australia. I’ve been especially interested in the votes this time though because, at short notice, many Australians residing overseas planning to turn up to their local Australian mission to vote were informed that most overseas voting would be done by postal vote.

This caused some alarm among many overseas residents, compounded by the fact that postal services at the height of the pandemic were very slow or even non-existent in some cases. As sceptical as some of us were that a postal vote would be delivered in time, I requested one anyway. The package eventually arrived with just a few days to spare. I numbered the green and white ballot papers, provided the necessary documents and statements to say why no witness was available and travelled the 90 minutes or so across town by trains to deliver my sealed envelope at the Embassy’s guardhouse. Then a return trip on the trains, to wait at home to watch the results unfold.

Of course, one of the key differences in living overseas now compared with when I first lived here in Tokyo as a student is the access to events at home through social media or streaming ‘local’ news. Voting in the 1980s relied heavily on week-old newspapers flown in from Australia (when you could find them) or news from home in letters and the like. The immediacy of the information available via the internet really means the distance has diminished, no more so than being able to participate with other constituents in Terri Butler’s Virtual Town Hall meetings prior to the election. In normal circumstances, I am the type of constituent who would turn up in person, so to be able to participate from this distance and hear others concerns was a valuable part of the process this time too.

I have a long connection with Griffith, from the time I left home to study at the namesake Griffith University, to being enrolled in the Division. My recollection of members extends back to Ben Humphreys, Graeme McDougall, Kevin Rudd and Terri Butler. Since its creation in 1934, it has swung between Labor and Liberal parties. Despite presently being overseas, I do have an ongoing interest in the area, at all levels of government. Now, when I do eventually get home, it will be to a Greens representative for the first time. Depending on the final make-up of seats in the House of Representatives, it will be interesting to watch how the local representation goes.

Of course, there was no waiting to see how the new government would perform, when no sooner had the new Prime Minister and Foreign Minister been sworn in then they were off to my part of the world, Tokyo, for a series of meetings including the Quad, a four-way dialogue between Japan, the United States, India and Australia. As it happens, I am a keen observer of the Japan-Australia relationship so no better opportunity to see how the new Prime Minister was welcomed into this new setting. By all accounts, Prime Minister Albanese acquitted himself well and, not yet 24 hours into his government, offered reassurances on the direction of Australian foreign policy and security intentions. Foreign Minister Wong, meanwhile, held several sideline talks with her counterparts as well.

But back to my green and white papers I’ve been wondering about. Did they make it back in time? At the 2019 election, according to the AEC data, there were 754 overseas votes included in the final tally; that was from a worldwide total of some 61,000 and just over 1000 from Tokyo. The AEC reportedly arranged around 40,000 postal votes for overseas residents this election, well down on 2019 but of course, as you would expect in these Covid times, fewer people overseas this year too.

Ultimately, the proportion of overseas votes for Griffith this time won’t change the result. But the experience has raised many serious questions for those of us who find ourselves overseas for work, family and other purposes at election time. For a number of Australian friends and colleagues here in Tokyo, they have been ‘disenfranchised’ by the five-year rule, wherein residence overseas for five years or more, even if you wish to remain enrolled in your Division (as many of us do), means you are struck from the electoral roll. This year’s sudden switch to postal voting will have also cost people the opportunity to vote. I know of people whose papers didn’t arrive, or arrived so late that it would be futile to expect the return post to arrive in time. I was lucky I just had a 90 minute train journey across town on a Saturday afternoon to deliver my vote; but others outside the metropolitan region would have had a much harder time getting through. The witness requirement (and the associated paperwork if you couldn’t find a witness) would have been a further deterrent for many.

On the Quad in Tokyo

Dr Donna Weeks is Professor of Political Science and Director (Dean) of International Relations at Musashino University in Tokyo. She was Chair of the Department of Political Science from April 2019-March 2022. A specialist in Japanese politics and Japan-Australia relations, in recent years, she has been fortunate to be making observations from the second-row of seats, behind all the more important people in the front row.