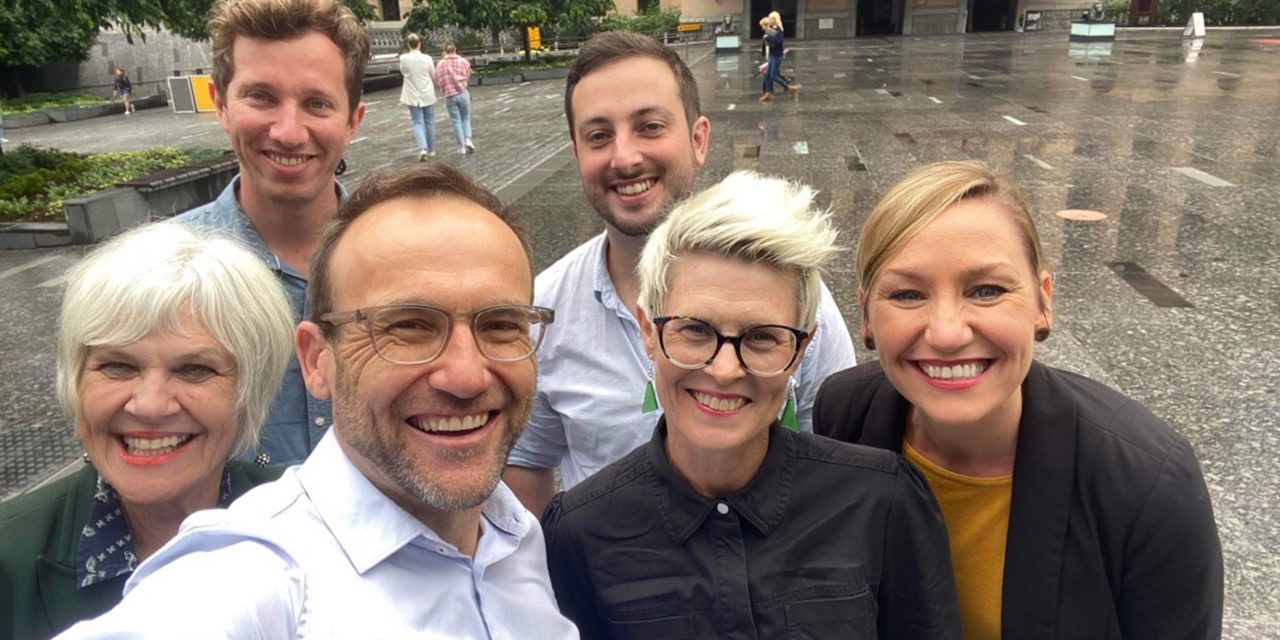 It is hard not to compare the outcome of election 2022, with the Federal election of three years ago. In 2019 the Bob Brown convoy to the mining town of Clermont served to enliven the climate wars and was touted by some as one factor in Labor’s surprise loss.

One of the more interesting outcomes of this election, though not yet widely reported, is that Senator-elect, Penny Allman-Payne, will be the Greens’ first elected representative based in a regional centre. And not just any regional town – she is based in the coal port of Gladstone in Central Queensland.

Ms Allman-Payne spoke with me by telephone from her home in Gladstone.

A teacher turned lawyer and now teaching again, Allman-Payne joined the Greens in 2010, standing for election in the state seat of Capalaba in 2012 and the Federal electorate of Bowman in 2013.

“I was really concerned about climate. That was the first climate election, I guess, and I was really keen to get a senator elected in Queensland. So, I joined the party and worked on that campaign.”

Allman-Payne has since served as the party’s State and National Convener and has been Convener of the Asia Pacific Greens Federation.

“It’s been a decade long project to build capacity in our movement to get us to the point we are today.”

The journey to Gladstone, where Ms Allman-Payne is now based, came after years of teaching across the state. After their first year of teaching, she and her husband transferred to Gladstone and spent six years there from 1994 to 1999. Then they went remote, teaching in Cape York and later in Bundaberg.

Allman-Payne returned to Brisbane to study for a law degree and then to the UK, where she did a Masters of Law in human rights.

After practising law for a time in Brisbane, Ms Allman-Payne went back to teaching and taught at a school in Cleveland. Then, in 2018, the family decided they wanted to go back to Gladstone.

“Our daughter was here, she’s a teacher. And we made the decision that we wanted to stay, and we have a home here now… we’re very embedded in the community. And it’s where we want to stay.”

The regions want change too

After the unprecedented success of The Greens in Queensland, with three lower house seats, and the elevation of Allman-Payne to the Senate, the state has been dubbed Greensland. But Queensland is still very split, with the LNP having a stronghold in the region. So I asked Ms Allman-Payne whether she thinks having a senator based in regional Queensland signals a different approach from the Greens to regional politics.

“I think there’s a couple of things to say about those observations. The first thing is that three-quarters of our vote for the Senate comes from outside Brisbane. But we do have to remember that whilst it’s concentrated, it’s not all there. And I think people overestimate just how much of the vote has to come from Brisbane.

“I would also make the observation that whilst certainly the LNP still holds virtually all of the seats north of the Sunshine Coast, their vote did go backwards, and in some places quite significantly. So, I think they’re certainly on notice that they’re not necessarily meeting the needs of the community.”

Nor does Allman-Payne think that it’s necessarily the case that the Greens need to do politics differently.

“The message we took to the election, was one that is very relevant to voters, right across the state, in all communities. Everywhere I went, people have real concerns about housing affordability, ability to rent, lack of supplies. Everywhere we went, we talked to people about the spiralling cost of health and access to health services, things like not being able to get dental, and why we’re pushing for dental into Medicare.”

“Everybody’s concerned about the cost of going to university and that’s actually more pronounced in the regions, because you don’t just have to pay the university fees, you have to pay to live away from home and all the things that entails.”

Referring to a report from The Next Economy, Allman-Payne said up to 60 per cent of people in the region want action on climate.

“There are such big similarities between what the community is saying they need and what the Greens have put forward in our Powering Past Coal and Gas policy.”

In another unmistakable sign that the electorate is ready for change, the Queensland Greens polled more in the Senate vote than the combined vote of Pauline Hanson’s One Nation and Clive Palmer’s United Australia.

The issue for The Greens, Ms Allman-Payne said, has been capacity. Because they don’t take big corporate donations, and they don’t have MPs across the state and the country, it is more challenging to get their message out beyond the southeast corner, Allman-Payne said.

“So, what really excites me and what we had hoped for in being able to win this Senate seat, is that we now have capacity in the region. So, I can go out into communities and talk to them about the sorts of things that we’ve been talking about, as well as listen to them about what they need.”

A new voice for the region

Ms Allman-Payne will base her office in Gladstone.

“I think this office is going to be a real combination of lots of community outreach, as well as doing the work with the Senate. And I’m quite excited by that. I’m also conscious of the fact that it’s going to be a significant challenge. But I’ll be thinking very seriously in the next few week – about the types of staff that we want to have, and the type of work that we want to do, to have an extension where the Greens have a whole new setting.”

Importantly, Allman-Payne said, the LNP would no longer be the region’s only voice.

“On Monday morning I was on Radio Capricornia. They spoke to Matt Canavan first, and then they spoke to me. And it dawned on me, as I’ve been saying all along, we need counterpoints, and getting other voices from this part of the world has already started happening.”

“No longer do representatives from the LNP get to be the only ones who speak on behalf of our region.”

Having taught all over Queensland, Allman-Payne considers she is in a unique and fortunate position.

“There are not many Senate candidates in the Greens or even outside the Greens who have worked extensively across the state. I think the thing about teaching too, is you are embedded in those communities. When you’re working there, you know what’s going on in families, what the pressures are on the community, and what’s happening in terms of employment because you see what happens with kids who are leaving school and what the opportunities are for them.”

Ms Allman-Payne said the Australian community has made clear that they want some meaningful action on climate, and it was good to hear Mr Albanese’s commitments at the QUAD meeting in Japan.

“But we also have a government that has said that they support the opening of 114 new coal and gas mines, and that is contrary to everything the IPCC, the International Energy Agency and the Climate Council are saying we need to do.”

“I think that there is going to have to be a new consensus about how we meet our climate targets. Obviously, what we’ve got in the new government is better than the government we had. But they’re not there yet. And so, whether that’s through a summit, whether that’s through dialogue between the Greens and the Independents, and the government, I don’t know. But certainly, there needs to be both if we are going to meet the targets that are going to keep us alive at 1.5 degrees.”

“They certainly will be on notice that they can’t take the community for granted. I think the rising Greens’ vote across the state also puts them on notice that they need to take meaningful action on climate. Their continued support for opening up new coal and gas will come under increasing pressure. It will be interesting to see how that plays out in the next couple of years.

Allman-Payne said that the Greens have time to get organised before the state election.

“There’s time for me to do a couple of years of work in the region. And it will be really interesting to see where that leads heading into a state election.”

In her roles as State and National Convener and with the Asia Pacific Green Federation, Ms Allman-Payne says she has had the opportunity to do a lot of consensus-building within her party.

“I really understand our party and our movement, and I’m looking forward to being a senator who is both community focused and also continues to be a movement builder. For 12 years now I’ve had to do two jobs, full time teaching and virtually being a full-time volunteer for the Greens. It’s going to be so exciting to have just one job. I’m really looking forward to that.”