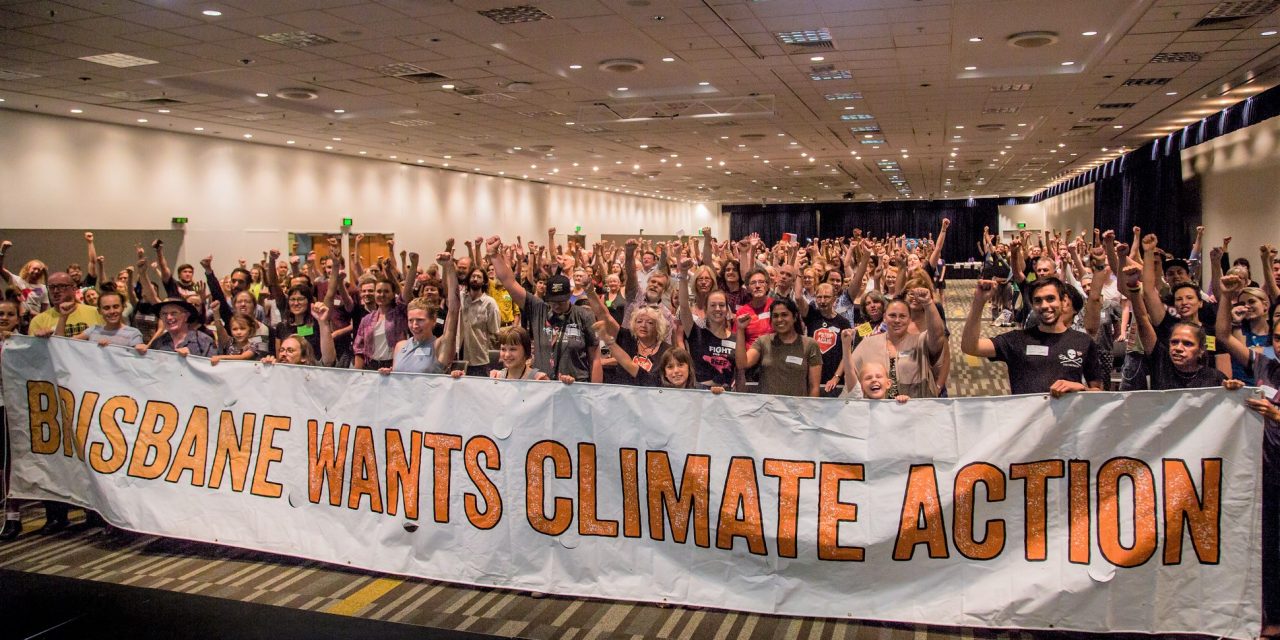 The Stop Adani Convoy left Hobart on Wednesday morning, 17th of April, with Bob Brown (in what looks like a bit of an “up you” to the Coalition), leading the way in a borrowed Tesla electric car.

Organisers say that the aim of the convoy is to, “…keep fossil fuel extraction, greenhouse gas production and global warming front and centre in the run to the election.”

The convoy has 754 registered cars with participants expected to join along the route. The convoy is traveling through Victoria, the ACT and NSW before arriving in Brisbane. It will then make its way to the Adani mine site at Clermont, and from there to Canberra for a rally before the election.

“We are a celebration in motion. It is a community commitment – an act of defiance – for the future of our planet. A peaceful protest against Gautam Adani’s mine, which his operatives say will be under way soon,” Bob Brown said.

Some media are reporting that the people of Clermont are not happy about the convoy coming to their town and that pubs and cafes will refuse to cater for them.

"Go back.. you are not welcome" That is what the people of Clermont are telling a convoy of protesters on their way to Queensland from Tasmania. They'll hold rallies across the state: to drum up support, against Adani. @ErinEdwards7 #7NEWS pic.twitter.com/EpDaJZodiM

Asked if the #StopAdani movement risks alienating the people it most wants to influence, a spokesperson for the Bob Brown Foundation told The Westender that their focus is the major political parties and putting pressure on them before the election.

“Our convoy will be a success if voters, on May 18th, have the Adani issue changing their vote,” Bob Brown said.

Tasmanian Farmer, Anthony Houston explained why he joined the convoy.

“It all started with me joining hundreds of kids on Tasmanian parliament house lawns, as part of the world wide climate strike. They were all demanding action on climate and asking where the adults were on this issue. I felt embarrassed but it also gave me hope, gave me courage to stand up and then join the Stop Adani Convoy. I know now, that together we can stop the Adani coal mine,” he said.

Tasmanian farmer speaks up for Adani protest and joins the Stop Adani Convoy. "The most important thing to me in the world is nature and climate change," Anthony Houston. https://t.co/NwuF6DC1Np #Climate #FarmersforClimate #ClimateElection #StopAdaniConvoy pic.twitter.com/IGNAc0Szw2

Brisbane residents are expected to join the convoy and march through Brisbane’s CBD at a rally at Queen’s Gardens on Easter Monday (22nd of April).