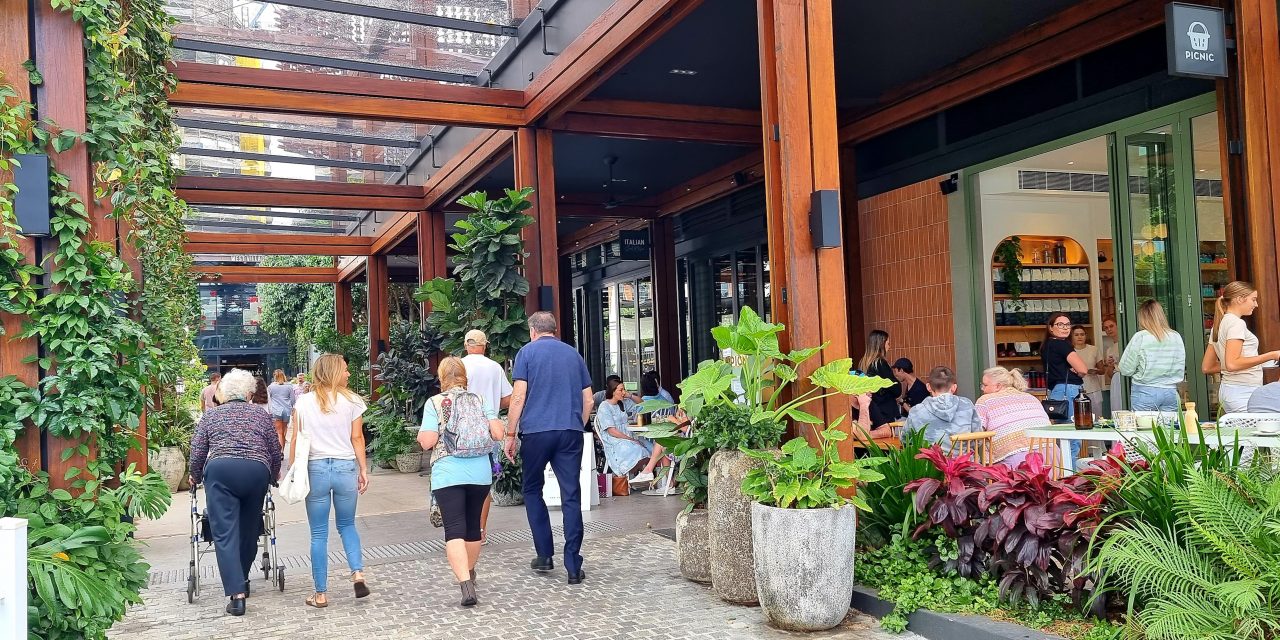 One of the things I enjoy most about election time is wandering around shopping precincts in West End and asking shoppers about the issues that will influence their vote in the 21 May Federal election. So, I started at West Village in West End’s Boundary Street last Saturday morning.

I am often surprised at the number of people who say they haven’t thought about the issues or don’t know the candidates in their electorate.

Less surprising is the number of people confused about the role of federal and state governments, even local councils.

While quite a few people didn’t want to talk to me, many did, and the messages they had and the issues they raised were quite mixed.

Voters raised concerns about defence, integrity, financial management, high rents, housing affordability, the handling of the COVID pandemic, health, the NDIS and aged care. Others spoke about the cost of living and Job Seeker. Climate change was also an issue for many of those who spoke with me.

I spoke to a tiny, self-selected sample, so it is hard to know how representative their views are. Still, overall the responses didn’t seem to favour any particular party, but I’m sure the candidates will have an opinion on that.

We hope to do more of these vox pops in different locations. Next time we hope to drill down into some of the policies we will hear about in coming weeks

Listen at link below

I am at West Village this morning, a slightly rainy and windy morning, a lot of shoppers around and I’m asking them, if they’ll tell me what the key issues are for them in the coming federal election. A surprising number of people told me they just don’t know or haven’t thought about it. Quite a number of people have asked me to pause while they think about what the issues are for them. It would also seem that people don’t know who the candidates are.

Hi, my name is Michael. The key issues that are coming up for me is probably the Solomon Islands security -taking sovereign risks off the table is important. I’d love to see that sorted.

Harry, what are the key issues that will influence your vote in this coming federal election?

Okay, thanks very much, Harry.

Jane, what are the key issues for you in this coming federal election?

I don’t like how the government handled and mandated so many things – I was really put out. I thought that’s not how people should be treated.

That was during the COVID shutdowns and things like that?

The shutdown, the mandate to be vaccinated. Totally disagree.

That was mostly the state government. What are the federal issues that that would influence you?

As far as I’m concerned, the federal issues back that whole behavior up, and I’m very concerned about the – it seems like dishonesty, and they’re not open. And I don’t trust them.

My name is Chris, but I’m not, I don’t have any real key issues, to be honest. So, I guess, infrastructure, and things. Well, my issues are more state policies I think at the moment, I feel so yeah.

My name is Sarah. And the key issues for me in the upcoming election are certainly things like climate change, integrity, financial affordability. And, yeah, that’s probably it.

And do you think any of the parties are really addressing those issues?

To be blatantly honest – absolutely not.

My name is Emmanuel. I think the key issue with West End or places like West End is the town planning, horrendous overpopulation, overbuilding, loss of character. It’s the gentrification of suburbs, which, to a degree is good for it but there’s a bad side to it.

How do you think the federal parties, the parties asking for your vote in the federal election, can address those issues?

I don’t think they will – it’s a local issue.

So, is there a federal issue?

Federal issue, and I think with regards to our treatment of refugees, our treatment of our indigenous people, and acceptance of the history of what we’ve done, I think they’re the important things for me.

So, my name is Jacques. And so, my thing is, I work in mental health. And, and just to say, since I’ve been in this position, what I’ve seen in regard to accommodation, boarding houses, and things like that, I think is absolutely disgusting. And I think there should be some more regulations put in place. You’ve got the NDIS, but also from experience, a lot of mental health clients of mine, don’t get NDIS. So, they’re basically left with what ever’s available for them.

My name is Rhiannon, and the issues that will be influencing my vote will be the cost of living and housing prices.

My name is Felicia and the issue that will be influencing my vote are the housing crisis and climate change.

Felicia, are the parties actually addressing those issues do you think?

My name is Michael. My key issues are defence and the economy and health.

My name is Gail. I’m concerned about the aged care situation with just the staffing of certain places, but I don’t know which one’s going to do anything about that.

My name is Charlie – my main issue is with aged care. I’ve seen, I’ve experienced with my mother, what happened with her and also with a lot of friends at the moment who have parents in aged care. And I just think it’s just the lack of staff – and it’s just a disgrace. And the thing that scares me the most is that that’s where we’re all going to end up. It doesn’t matter who you are or where you come from, or how much money you’ve got. That’s basically it. That’s the waiting room right there. And so, I just think it needs to be improved.

Ken what are the issues that are going to influence your vote in the coming election?

The first would have to be economic issues, because I want to strong Australia. And then I suspect defence is another one, because we’ve got a lot of stuff going on. China’s trying to take over the world, basically. So that would be a big issue as well.

Are you in the Griffith electorate?

Now I’m unsure? I always get confused with that.

Do you know who any of the candidates are?

No, but I tend to go towards conservative views.

My name is Zoey and my vote this year will probably be decided based on humanitarian issues, and maybe some healthcare considerations too.

When you say humanitarian issues, can you be a bit more specific?

You know, the way we deal with refugees, homeless people, you know.

Can you tell me do you know who the local candidates are in the local electorate?

My name is Mandy, and the key issues for me are housing affordability – I’m a renter, so rents keep going up. My income has gone nowhere in 20 years. And also, healthcare. I have bad bones; early onset osteoarthritis and I have to pay for my own health. I’ve never been able to afford health care — private health care. Yeah, so I grew up in Sydney, I had to leave because it couldn’t afford to live there. Came to Brisbane, I had to move out, of I’m still the West Ender, but I’ve had to move out a bit. because I can’t afford the rent and I’m in fear of my rent going to go up and up. And yeah, the pension – I can’t get the pension yet and I can’t afford to live on JobSearch.

I’m Emma, and I haven’t really thought about the key issue for the coming elections.

My name is Simon Black – key issues for me are education, and also transport.

And do you think any of the parties are addressing those issues?

Those issues cut across the state government and federal government. Can you think of an issue that’s primarily a federal issue that concerns you?

Off the top of my head, not really no.

My name is Nui – free childcare I reckon is really important and making Medicare more affordable because I feel like there’s not many bulk-billing doctors around anymore.

My name Charmaine – I think that this Medicare issue is a big one at the moment. I think that including dental into Medicare is important. So that’s come up as a topic and I think that’s a good idea. So, I think all parties should embrace that.

So, my name is Jayla Issues for me, and this upcoming election will be equal rights for the LGBTQ community. I feel that in Queensland, it is a problem. I went to an all-boys school and then I, after graduating, you know, five years after graduating, I decided to become a trans woman.

My name is Michael – Scott Morrison is a Hillsong advocate. I liked that about him. And Albanese is a boofy builder aficionado, to appeal to the commoner, and I like that too. And I’m not swayed by either. For the first time in my life, I’d consider a donkey vote.

You talked about the personalities of the two leaders of the main parties, and you think you might do a donkey vote, have you considered voting for a minor party?

No, no, I think we’re a two-party system in Australian democracy.

So, are there issues that you can pinpoint that might make difference?

Probably management of the COVID situation by Scott Morrison has been a huge thing that I’ve been considering when it comes to who to vote for.

My name is Luke key policies for me are affordable housing, restricting laws on developments and climate policy.