Exhibition: Art and Activism in the Nuclear Age. 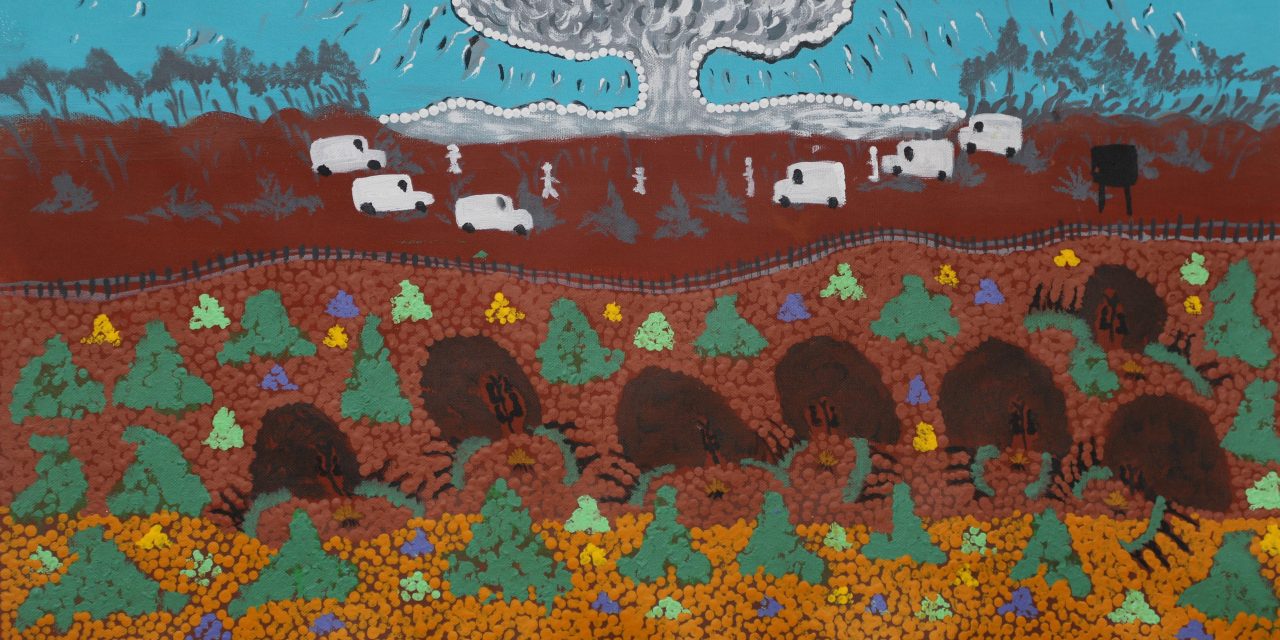 Concerns about nuclear bombing are confronting us all again.

On Monday 13 June, The Guardian newspaper reported an expected increase in the world’s nuclear arsenal for the first time since the end of the cold war. Quoting the Stockholm International Peace Research Institute (SIPRI), the article warned that the ‘risk of such weapons being used is the greatest in decades.’ The situation in the Ukraine, SIPRI reminded us, has ‘heightened tensions among the world’s nine nuclear-armed states.’

Art has been at the vanguard of activist resistance to nuclear weapons development ever since. There has certainly been much to resist, with nuclear warheads and missiles now having capacities far greater than the so-called ‘Little Boy’ used to incinerate the people of Hiroshima.

The people of Brisbane have a special opportunity next month to know more about resistance to the nuclear age through art. Art and Activism in the Nuclear Age, an exhibition showcasing selected key artistic responses to the era of nuclear weapons, will be held at the POP Gallery, corner Brunswick and Ivory Streets, Fortitude Valley from 6 to 16 July.

Opening Night is Friday 8 July, 6-8pm and all are welcome. The Combined Brisbane Unions Choir will perform, and speakers include Councillor Jonathon Sri and the Very Reverend Dr Peter Catt of St John’s Anglican Cathedral.

The centrepiece exhibit is a full-sized replica of the acclaimed 7.2 metre by 1.8 metre Hiroshima Panel, ‘Fire,’ on loan from the Maruki Gallery for the Hiroshima Panels in Japan. This 1950 work depicts the bomb’s inferno. It was produced by husband and wife artists, Toshi and Iri Maruki, who went into the city to help Iri’s family not long after the catastrophic attack.

Exhibited around the world, the Hiroshima Panels were shown in Australia only once, in 1958. Sponsors of that tour included then art world luminaries such as Dame Mary Gilmore and William Dargie. Since the panels did not travel to Brisbane in 1958, this will be the first viewing of ‘Fire’ in this city.

Complementing the huge ‘Fire’ image is a series of smaller sketches created by citizens in Hiroshima at the time of the bombing. For the first time outside Japan, a video will screen of the ‘Nagasaki Scroll,’ (1946) by Fukami Noritaka. The exhibition also features an original painting of Hiroshima by renowned children’s book illustrator and Hiroshima survivor, Junko Morimoto.

Other exhibits include the internationally recognised ‘Life Lifted into the Sky’ by Yalata women painters in response to the British nuclear tests on aboriginal land in Maralinga, South Australia, between 1956 and 1963. Several works, including a photograph of Yankunytjatjara man Yami Lester, an anti-nuclear and indigenous rights advocate who survived the nuclear testing, are on loan from Victoria’s Burrinja Gallery. Exhibits such as these emphasise the complete disregard for indigenous peoples by nuclear test regimes around the world.

Other items include brilliant Chernobyl photography by Merilyn Fairskye and a small collection of Brisbane based anti-nuclear activist materials.

Exhibition supporters include the Australia-Japan Foundation, the Brisbane Lord Mayor’s Community Fund through The Gabba Ward office of Jonathan Sri, the Union of Australian Women (QLD), Just Peace Qld, and UNAAQ. The Japanese Studies Association of Australia is also a key sponsor. The organisers are extremely grateful for this support.

Cover image: Karen Ingomar, ‘They take us away them white fellas,’ 2016. From the collection, ‘Life Lifted into the Sky,’ by Yalata painters.