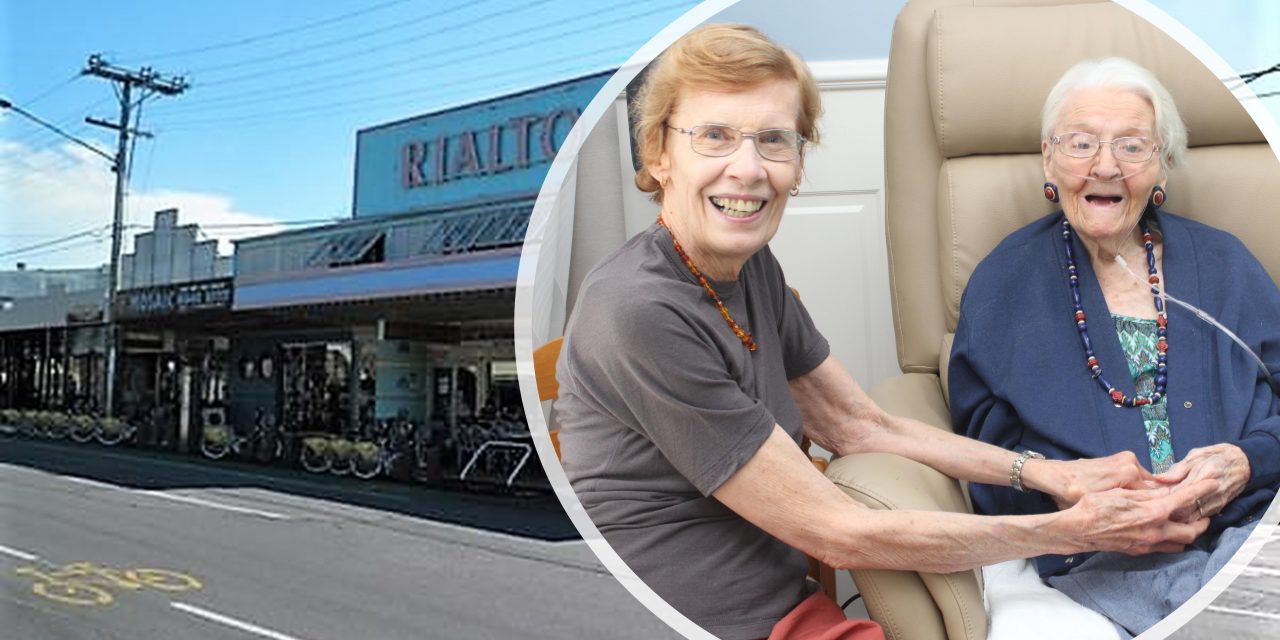 West End born Joycelyn Munro worked at cinemas in her youth and in March was the big star of the Carinity Wishart Gardens aged care community.

Joycelyn was born in her family home in West End in Brisbane on 31 March 1922 to parents Diana and Percy Garrick. A big part of Garrick family life was attending services and activities at West End Methodist Church (now Uniting Church), at which Joycelyn and her sisters Ruby and Audrey sang in the choir and where Joycelyn would later get married.

The family, which included older brother Ronald, later lived in Torwood and Highgate Hill and would holiday at Queens Beach or Suttons Beach at Redcliffe. From the age of 15, Joycelyn worked for an accountant’s firm in Brisbane city. She also helped at two Garricks Entertainment cinemas in West End – the Rialto Picture Theatre in Hardgrave Road, and Lyric Picture Palace which was in Boundary Street – owned and operated by her grandfather.

“She loved all the old movies and knew all the actors’ names. Randolph Scott was one she liked more than others. She loved going to movies right up to when she moved to Carinity Wishart Gardens,”Joycelyn’s daughter Elsa Green said.

Joycelyn and her sisters would walk from the family home to the Lyric theatre to be ticket sellers or usherettes for evening and Saturday matinee shows. The film shown first in a two-movie program at the Lyric was the second feature of the Rialto program.

Joycelyn recalls a boy would transport spools of films between the theatres by bicycle. Joycelyn’s love of movies continued into her adult life. She also enjoyed old time and Scottish dancing, photography, knitting, crocheting, learning the Esperanto language, going out for coffee, and completing a history of her father’s side of the family.

Following a four-year engagement, Joycelyn married Navy officer Ken Munro in a hastily arranged wedding in January 1945. Their families only had a few days to arrange the nuptial celebrations, brought forward by two months as Ken’s leave was changed at the last minute.

For most of their married life Joycelyn and Ken lived at St Lucia and Kenmore Hills. Together the couple had three children with the family further expanding to include six grandchildren and eight greatgrandchildren, whose ages currently range from two to 17 years.

Elsa said her mother has been “a marvellous role model for the family” who has been looking forward to her milestone birthday.

“I know since moving into Wishart Gardens 10 years ago she was very keen on reaching her 100th birthday. Mum led a full life and had many friends, she valued family life and always loved family gatherings,” Elsa said.

“Like any centenarian, she has witnessed tremendous changes in the world but through all these changes our mum has remained the same kind, loving, generous, hospitable and generally thoughtful person to everyone.”

Joycelyn’s 100th birthday party at Carinity Wishart Gardens was attended by many friends and family members including her daughter Diana, who resides in New Zealand, and a specially arranged Scottish piper.

Many thanks to Lee Oliver Communications Officer with Carinity for this story.