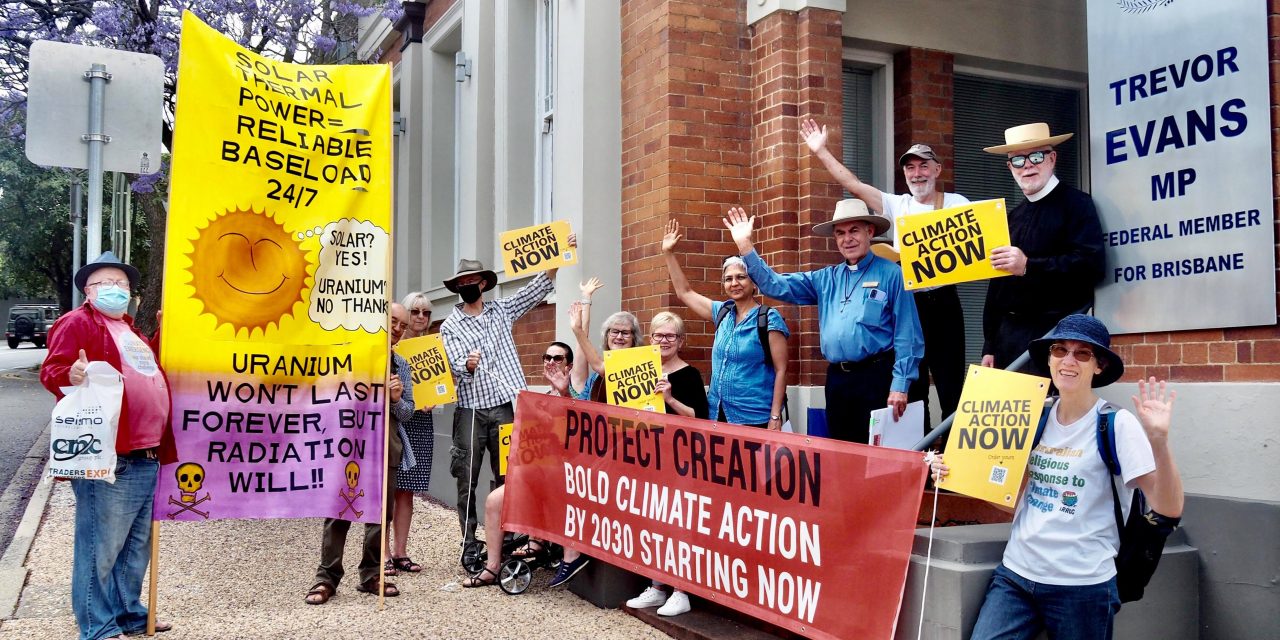 Following the national Student Strike for Climate on Friday, faith communities across Australia are holding vigils today outside the offices of Members of Parliament, including Trevor Evans MP for Brisbane.

They are demanding that Australia take stronger climate policies to the United Nations climate Summit in Glasgow, especially a stronger target for the year 2030.

After some prevarication, Prime Minister Scott Morrison now intends to attend the United Nations climate change conference, COP26, in Glasgow at the end of the month. He had hoped to commit to a net zero by 2050 plan before the conference. However, Nationals leader Barnaby Joyce said on Sunday that his party would not commit at this stage to supporting the government’s proposed pathway to net zero carbon emissions by 2050.

Among the many religious leaders outside Trevor Evans’ Albion office was The Very Rev’d Dr Peter Catt, Dean of St John’s Cathedral who said that people of faith want to remind the MP that God created us to be stewards of Creation:

“We have already started to see the consequences of not looking after the planet. The federal government must invest in clean energy now and take bold climate action by 2030 for the sake of our children, and future generations”, Dr Peter Catt said.

“Restoring the balance to our climate by switching to clean energy is good for the Earth, and also great for the economy as it will also bring secure long-term jobs for communities across Queensland and around Australia.”

Part of a global multi-faith day of action, similar protests are being held in hundreds of locations around the world, from New York to Nairobi, Lilongwe in Malawi to London, some with corporate targets such as BlackRock and others challenging deforestation.

Over 120 diverse faith communities across Australia were involved yesterday and hung banners on their places of worship or held events, calling on Scott Morrison to set much bolder climate targets for 2030. As the Government considers a target of net zero emissions by 2050, faith communities say that only an ambitious near-term goal would make that goal meaningful.

In Australia, actions are organized under the auspices of the Australian Religious Response to Climate Change (ARRCC), a founding partner of GreenFaith International.

Note: The Westender is seeking comment from Trevor Evans MP.