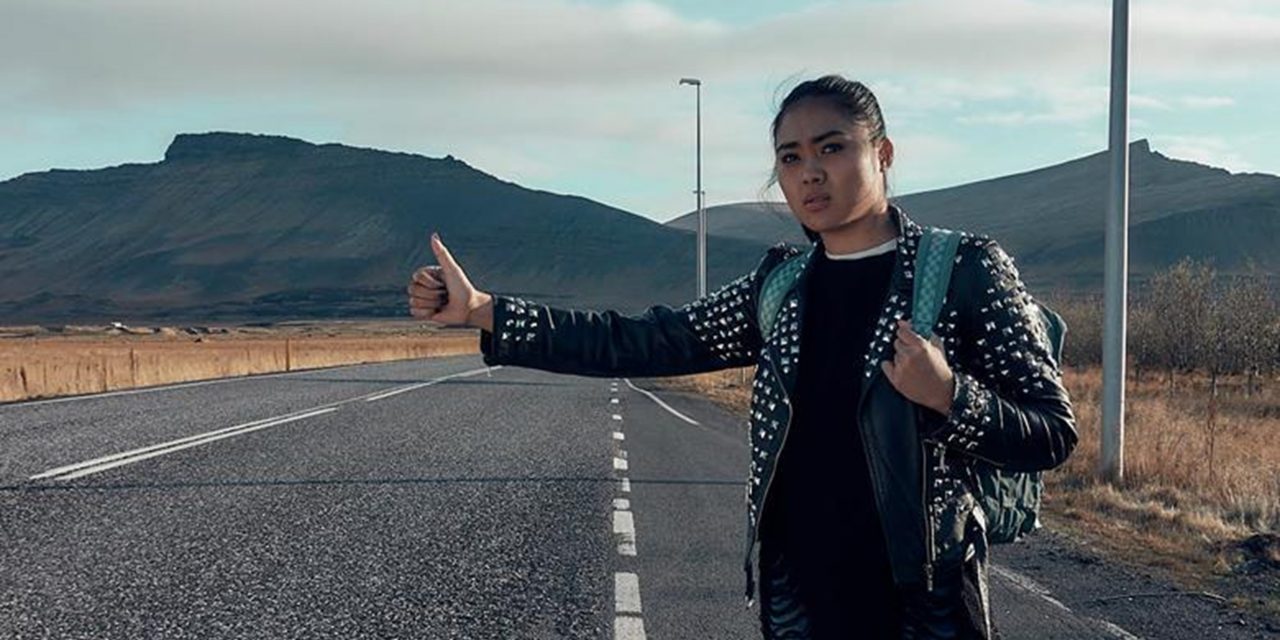 With a gruelling opening scene of a teenage girl vomiting in a toilet because she’s hungover – and we’ve all been there – it’s clear from the first moment that Agnes Joy will be a gritty and realistic film about day-to-day life and its challenges. The film is punctuated by a few breathtaking shots of Iceland Reykjavik over the water, and sweeping ice-capped mountains which may seem unfamiliar. However, the small town in which the film is set brings with it a strong nostalgic feeling, as does the film’s themes of growing up, the complications of life and the desire for something more.

For the most part, the film is smooth and slow moving which illustrates the boredom and mundane features of the characters’ lives yet does this in a charmingly engaging way. With the seamless cinematography, director Silja Hauksdóttir invites audiences to follow Agnes (Donna Cruz) and her mother, Rannveig (Katla M. Þorgeirsdóttir) as if we are following their daily lives right by their sides. There’s a sombre tone to the film and one can feel the hollowness in each of the protagonists who find themselves struggling with the extreme lack of fulfilment they experience with each passing minute.

Agnes feels stifled by her controlling mother and by youth, desperate to move on and live in a bigger city, with more interesting people, and thus drinks constantly to cope with her boredom. Her father, Einar (Þorsteinn Bachmann) is depressed and barely engages with his family, choosing to spend all his free time watching television. Agnes’s mother, Rannveig, quickly becomes the most interesting character in the film and suffers from the largest lack of fulfilment. Her job was thrust upon her after the death of her father, yet she loathes both the tasks she must undertake and the people she must deal with – and many of us could sympathise. Her marriage is falling apart and she is evidently not fulfilled sexually which humorously distracts her from her work.

Rannveig is a control freak who is rapidly losing control over every aspect of her life. Her defiant daughter is becoming more and more bold in the ways she rebels, the job she never wanted is operating with nastier methods by hiring cheap foreign labour, she is fast approaching menopause and is watching her own mother grow older, losing control of her own life too. It all becomes overwhelming and she can often be found smoking when no-one is watching. Every character has their coping mechanisms, most of us do.

The plot takes a turn when a new neighbour moves next door: a handsome actor called Hreinn (Björn Hlynur Haraldsson) who viewers might recognise from his portrayal of Eist in Netflix’s ‘The Witcher’. He becomes the spanner in the works that breaks every last working cog in the family’s poorly functioning machine. There is obvious chemistry between Hreinn and Rannveig as he is the same age as her husband yet so much more vibrant and charming and youthful, encouraging her to think about her needs and her dreams where up until now, her whole life has been dedicated to looking after others and keeping the family together.

Hreinn finds his way into a steamy encounter in a car with Agnes, followed by a similar encounter with Agnes’s mother … that same evening. When Rannveig realises this, she keeps it to herself to protect her daughter, as is the instinct of all good mothers. Einar puts two and two together, breaking down in front of her realising that his all-consuming apathy has made him blind to the fact that another man is sleeping with his wife and his daughter.

Interestingly enough, despite the agonising emotional toll this has on Rannveig – particularly after her mother’s sudden death – she does something both powerful and unexpected: she lets go. This is arguably the most prominent theme in the whole film and it becomes clear that this story is about Rannveig and her journey to letting go. It leads her to quit her job and follow her dreams, letting go of her responsibility for the company, letting go of her mother’s death, letting go of her failing marriage and most importantly, letting go of the control she so desperately tries to keep over her daughter.

Donna Cruz portrays Agnes expertly, from the boredom of a teenager to her struggles transitioning to adulthood. You can see the hunger for independence and the ecstatic thrill in the brief moments of her life that are exciting and rule-breaking. Katla M. Þorgeirsdóttir brings an immersive portrayal of Rannveig that is so convincing, it was sometimes hard not to picture her as my own mother, saying the same things, giving me the same warnings. Yet behind her eyes is that emptiness that audiences cannot help but feel drawn to through her resilience and pathos. Þorgeirsdóttir does not present the subtle tear on the cheek of an old Hollywood rom-com but stabs you in the heart with the gut-wrenching sobs of a character who is losing her grip on every single aspect of her life.

The film evolves from a coming of age narrative to a story of acceptance and a mother finding joy in the pursuit of her daughter’s joy. It’s a realistic and raw story about the ebb and flow of life and all the complicated things that happen along the way, teaching us a valuable lesson in the happiness and contentment that comes with simply letting go.

Agnes Joy features at Palace Cinemas as part of the Scandinavian Film Festival which commences in Brisbane on Friday 15 July.